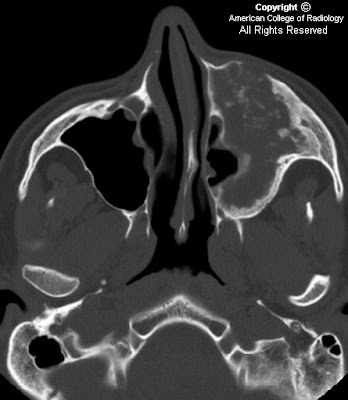 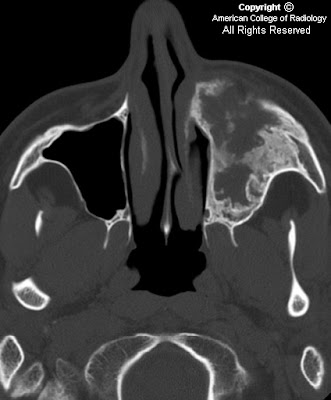 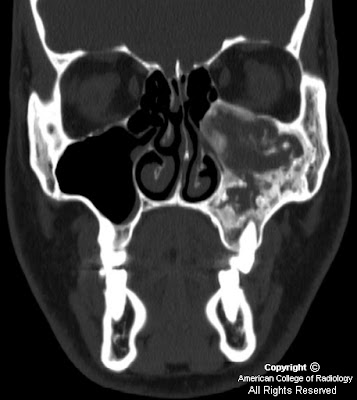 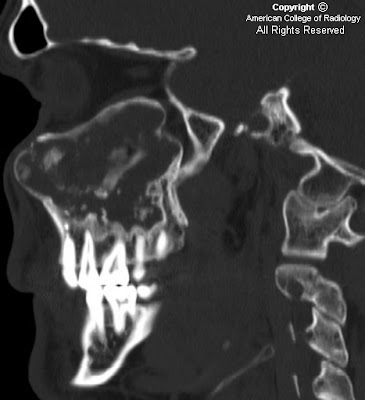 
Fibro-osseous lesions of the paranasal sinuses are a broad spectrum of bony disease with fibrous dysplasia, ossifying fibroma, and osteoma being distinct entities that lie along a continuum from the least to the most bony content. They have similar appearance and makeup; however, their clinical implications vary.

Osteoma is the most common tumor of the paranasal sinuses. The vast majority (95%) of sinonasal osteoma are found in the frontoethmoidal region. Most frequently, osteomas are asymptomatic and are discovered incidentally

Fibrous dysplasia (FD) is a slow-growing fibro-osseous lesion that can be located in the paranasal sinuses. It can be mono- or poly-ostotic. Fibrous dysplasia affects children and characteristically “burns out” during puberty. It is deforming but not destructive.

Radiographically, it is a sharply circumscribed, expansile lesion with an eggshell rim and a central low attenuation fibrous center. Ossifying fibroma is locally aggressive and can absorb tooth roots, whereas fibrous dysplasia usually encompasses the healthy roots.

Because of the aggressive and locally destructive nature of ossifying fibroma, complete surgical excision is recommended.
Pubblicato da David Spizzichino a 16:00