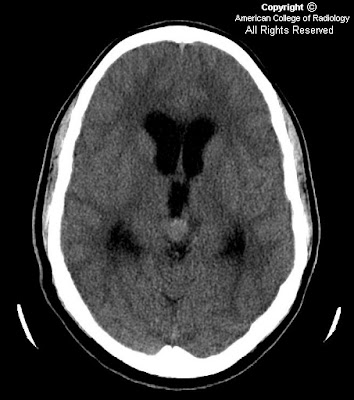 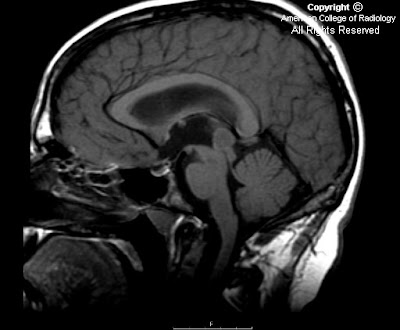 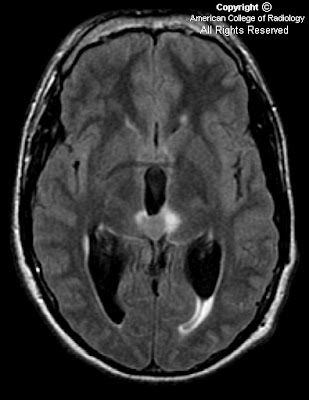 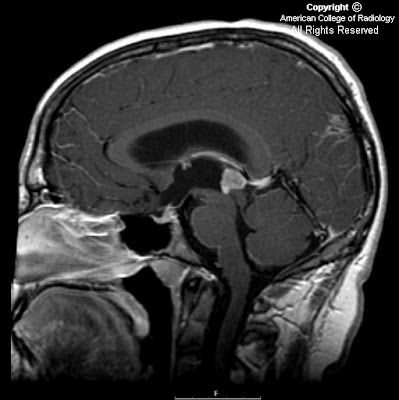 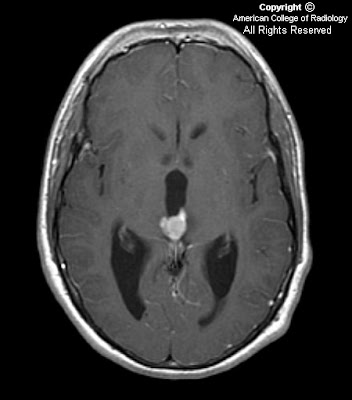 
Pineal region tumors account for only 0.3-2.7% of intracranial tumors with germinomas making up the largest portion of the region’s tumors, approximately 40%. Additionally, germinomas are the most common of the germ cell tumors, with a large portion, 90%, presenting in patients less than 20 years of age. They tend to show a substantial male predominance. Patients with pineal germinomas may present with Parinaud syndrome (upward gaze paralysis with altered convergence). Additionally, diabetes insipidus can be a presenting sign with suprasellar germinomas prior to abnormal imaging findings.

NECT scan of a germinoma usually reveals a mildly hyperattenuating mass that may have calcifications in or around the tumor. Both contrast enhanced CT and MRI will demonstrate intense enhancement (which is often speckled in appearance on MRI). Iso to hyperintense signal is seen on both T1 and T2 weighted MRI images. The tumor marker PLAP (Placental Alkaline Phosphatase) tends to be elevated in both the serum and the CSF of patient’s with a germinoma.

Several important diagnoses should be considered when faced with pineal region pathology. Pineal parenchymal tumors, pineoblastomas and pineocytomas, may demonstrate calcifications in or around the tumor, however this occurs three to four times more frequently with germinonas. Other lesions to consider in the differential include other germ cell tumors and tectal gliomas. Serum and CSF tumor markers, including ß-HCG and alpha-fetoprotein, may be beneficial in narrowing the differential.

Dissemination of germinomas arising from both locations into the CSF is common. Consequently, MRI of the entire neuroaxis is recommended prior to surgery. Germinomas have a relatively good prognosis because of their sensitivity to radiation and chemotherapy; 5-year survival approaches 90%.
Pubblicato da David Spizzichino a 16:00