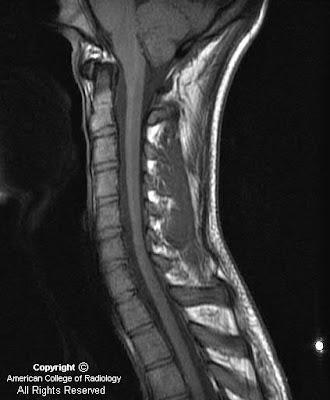 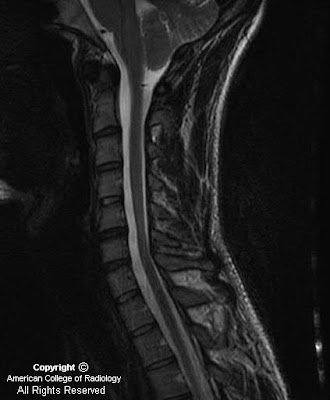 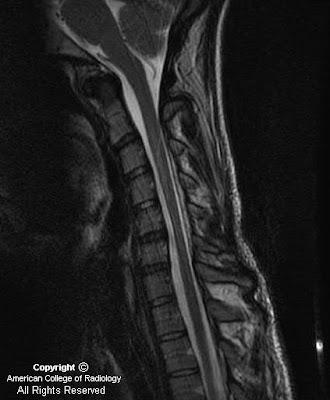 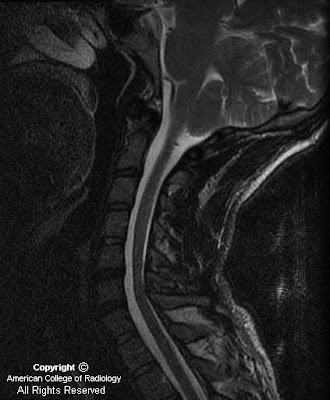 Hirayama disease is a rare condition that primarily affects males aged 15-25 of Southeast Asian decent, although it also can be seen in patients of other heritage. It presents with an insidious onset of asymmetric hand and wrist weakness, muscular atrophy, cold paresis, and exertional fasciculations. The disease progresses for approximately 5 years and then stabilizes. This is a lower motor neuron disease with both acute and chronic denervation identified on EMG in the C7-T1 myotomes. There are no upper motor neuron and generally no objective sensory deficits, although paresthesias can occur.

The specific cause of Hirayma disease is unknown. The prevailing theories are based on the presumption of differential growth of the dura and the osseous spinal canal during puberty. The dura is most strongly anchored near the foramen magnum and the coccyx. Usually, there is enough dural slack to accommodate changes in the length of the spinal canal in cervical flexion. In patients with Hirayama disease, however, it is believed that a relatively short dural sac becomes taut in flexion, pulling the dural sac and spinal cord anterior. This results in cord atrophy, possibly from repeated mechanical trauma or from circulatory insufficiency. Correlative pathological data is limited, but ischemic changes in the anterior horn cells at C7-T1 have been described in autopsy data. Selective involvement of the anterior horn likely results from increased sensitivity of this area compared to white matter to ischemia.

Early in the disease, a cervical collar can be used to mitigate progression. Patients that do not respond to cervical collar treatment and demonstrate compression of the cervical cord against the subjacent vertebral body can be treated with duraplasty and posterior spinal fusion.

There are several characteristic radiological features of Hirayma disease. In a neutral position, a cervical spine MR often demonstrates atrophy of the lower cervical spinal cord in the anteroposterior direction, which can be subtle. Some authors have reported that cord atrophy is often asymmetric, predominantly affecting the side corresponding the weakest limb. There can be loss of attachment of the posterior dura to the vertebral lamina or occasionally T2 signal change in the atrophic cord.

On flexion views, the dural sac moves anteriorly, and a crescent shape mass forms posterior to the cord. Interestingly, while the forward movement can be pronounced in the progressive stage of the disease, this finding can be subtle or absent in older, affected patients. Myelography can also demonstrate the forward shift of the cervical spinal cord with flexion, although this examination is technically difficult. The crescent-shaped mass is believed to be due to internal vertebral venous congestion, since it disappears in the neutral position, can have flow voids, and reportedly has demonstrated flow on cinematographic MR. This crescentic mass typically demonstrates high signal on both T1 and T2 weighted images.
Pubblicato da David Spizzichino a 16:00