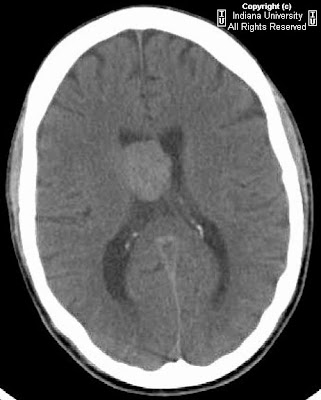 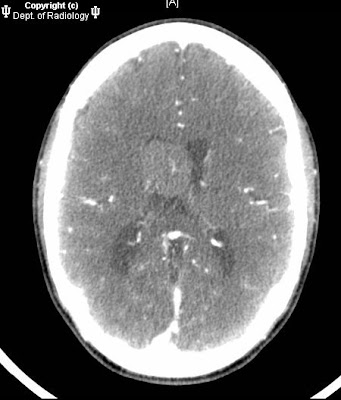 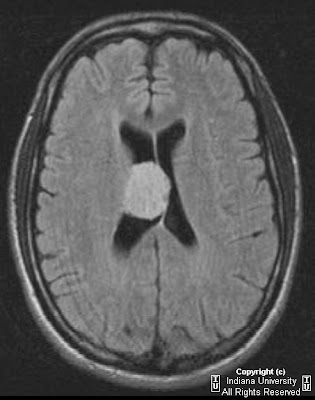 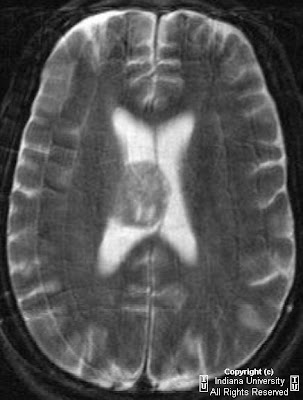 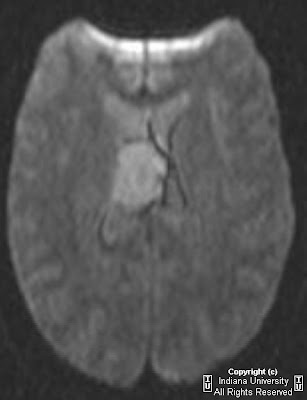 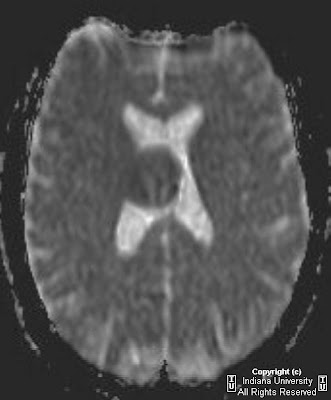 CT: Ovoid 3.0 cm intraventricular mass arising from the frontal horn of the right lateral ventricle. Arises just above the foramen of Monroe and mildly displaces the septum pellucidum. There is a faint contrast enhancement, and a few small, irregular vascular structures are demonstrated.
MR: Mass is isointense on T1W sequences and mildly T2W hyperintense to gray matter. Internal microcystic change and diffusion restriction is noted. No hydrocephalus.

Intraventricular neurocytomas are extra-axial brain tumors seen in young adults and older children with an age range of 17 to 53 years. Patients frequently develop hydrocephalus and symptoms related to elevated intracranial pressure. In addition, patients have also been reported to present with seizures, visual symptoms, or coma. On gross exam, these tumors are near or attach to the septum pellucidum and are well circumscribed. Microscopic evaluation reveals cellular tissue with fine to coarse calcifications being present more than half the time. Central neurocytoma can appear similar to an oligodendroglioma radiographically and histologically, but can be differentiated by a positive immunostain for synaptophysin. Clinically, intraventricular neurocytomas have a good prognosis and generally behave in a benign fashion. Complete resection is the therapy of choice and patients with incomplete resections often still have a good prognosis. Radiation therapy is utilized only in rare malignant cases.

CT: Demonstrates a large mass involving the lateral and third ventricles. There is usually associated hydrocephalus. The mass is isodense to brain with fine to course calcification. Moderate enhancement with IV contrast is seen in the noncalcified portions. The tumor frequently abuts or is attached to the septum pellucidum. Extension into the fourth ventricle and extraventricular tissue is associated with anaplastic histologic appearance.