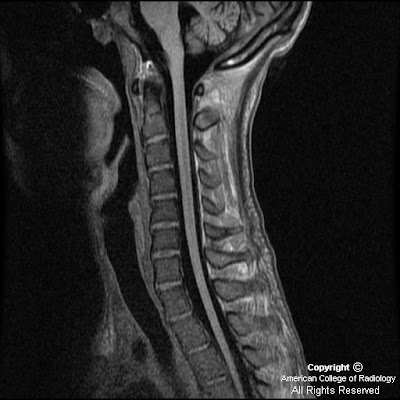 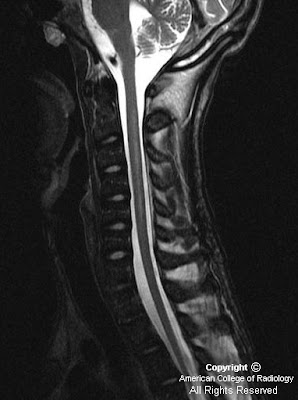 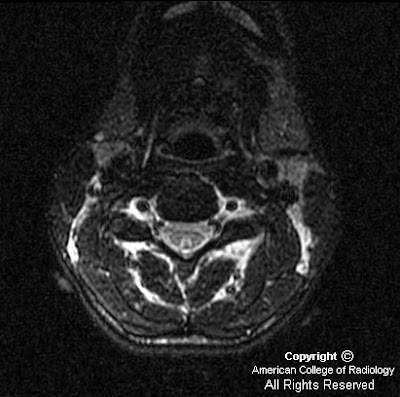 Figure 1 and Figure 2: Sagittal T1 and T2-weighted images of the cervical spine demonstrate minimal hypointensity on T1 with increased signal on T2 extending from C2 though approximately C5. Note the hypointensity in the vertebral bodies on both T1 and T2, a characteristic of HIV disease.
Figure 3: The axial T2 image demonstrates the abnormal signal to be symmetric within the posterior columns of the cord.


Vacuolar myelopathy is the common chronic myelopathy associated with HIV infection, occurring during the later stages of AIDS when lymphocyte counts are extremely low. There are usually other manifestations of AIDS at the time of diagnosis. Patients generally present with insidious progression of weakness and sensory loss with progressive spastic paraparesis in contradistinction to AIDS related CMV myelopathy. With the introduction and widespread use of HAART, vacuolar myelopathy is not as common as it once was occurring in only 10% of AIDS patients.

The histopathological findings include vacuoles and lipid-laden macrophages within the spinal cord. A hypothesis for the disease occurrence is infiltration by HIV infected mononuclear cells which secrete neurotoxic factors.

The most common imaging findings on MRI are atrophy of the cord and abnormal signal on T2 weighted sequences particularly in the posterior columns. This signal abnormality generally occurs over multiple vertebral body lengths.

The clinical and MRI findings are similar to subacute combined degeneration (myelopathy associated with Vitamin B-12 deficiency). This necessitates correlation with laboratory tests. Serum vitamin B-12 along with homocysteine and methylmalonic acid levels should be obtained. Of course in an AIDS patient, CD4 count should be obtained along with the above tests. Other causes of the imaging findings could include viral illnesses and therefore if the diagnosis is not clear, CSF analysis should be performed to identify CMV, varicella, HSV, HTLV-1 or HTLV-2. In HIV associated vacuolar myelopathy CSF and B-12 levels are most often normal.
Pubblicato da David Spizzichino a 16:00