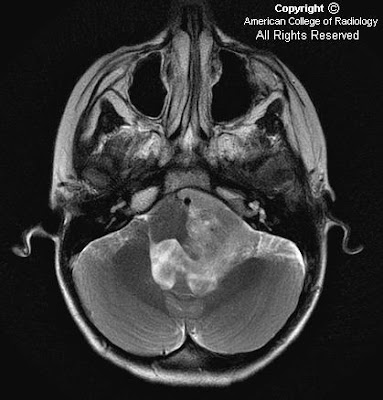 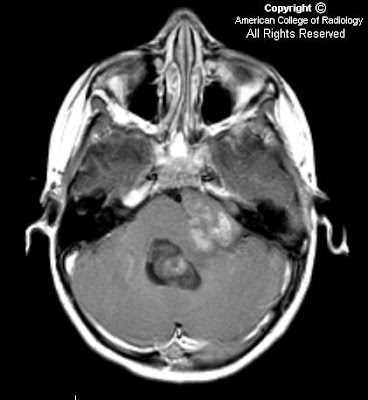 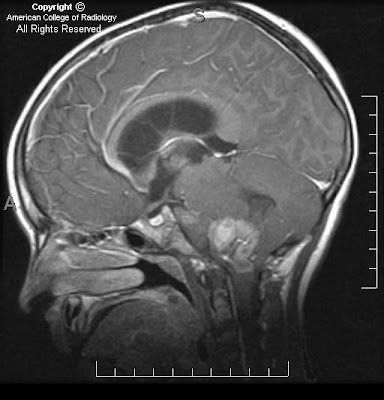 Figure 1: Axial T2-weighted image shows predominantly iso-intense lobulated heterogenous mass lesion with few cystic areas located in the fourth ventricle extending into the cerebellopontine cistern through the foramen of Luschka. There is mass effect on the pons and dilatation of the fourth ventricle.
Figure 2: Axial Post Gd T1 image is showing heterogenous enhancement of the mass lesion in both intraventricular and cerebellopontine cisternal component.
Figure 3: Sagittal Post Gd T1 image showing the cranio-caudal extent of mass lesion extruding through the foramen magnum inferiorly and into the prepontine cistern. Notice the hydrocephalus with stretching of corpus callosum.


Ependymomas are common neoplasms that arise from differentiated ependymal cells that line the cerebral ventricles and central canal of the spinal cord. Ependymomas of posterior fossa have two age peaks, the first between the ages of 1 and 5 years and second in the fourth decade. In childhood, 70% of ependymomas are infratentorial and 30% are supratentorial.

Patients with posterior fossa ependymomas generally have insidious onset of symptoms with a long clinical history. Nearly all children with this tumor have nausea and vomiting resulting from increased intracranial pressure and hydrocephalus. Other symptoms may include torticollis, ataxia and lower cranial nerve neuropathies.

On MR, ependymomas are generally heterogeneous with areas of calcification, hemorrhage and cystic changes. They generally show intense enhancement but it can be variable. The most important imaging finding to identify ependymomas is extension of the tumor though the fourth ventricular outflow foramina. Tumor extending through foramen of Magendie, foramen magnum, or foramen of Luschka into the cerebellopontine angle cistern with insinuation around cranial nerves and vessels is quite characteristic.

Because of their tendency to insinuate and adhere to adjacent structures, they are quite difficult to cure. Contrary to medulloblastomas, which frequently have subarachnoid seeding at the time of presentation, ependymomas rarely have CSF spread at the time of presentation; although they may do so in few years. Although they are considered WHO grade II tumors, removal of the entire tumor is difficult and recurrence rate is high after surgery. Postoperative radiation therapy is advocated for partially resected ependymomas.
Pubblicato da David Spizzichino a 16:00