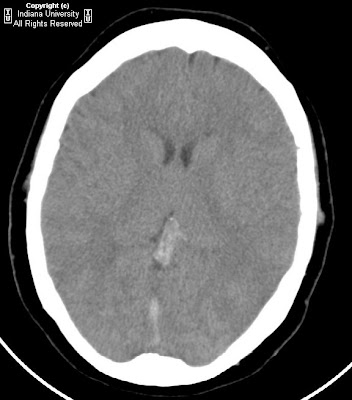 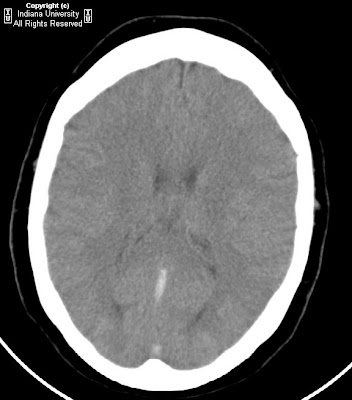 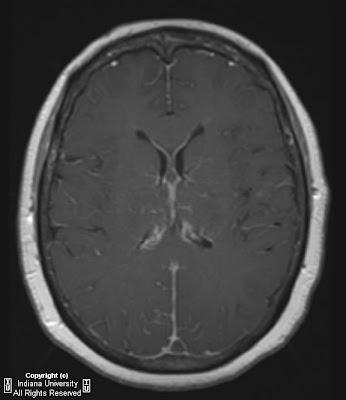 Thrombosis of the cerebral venous sinuses is a difficult diagnosis to make in that presenting symptoms are quite non-specific. Venous sinus thrombosis is now thought to be much more common than before because of improved imaging techniques but is still less common than acute arterial occlusion. Venous occlusion leads to regional ischemia and infarct, most often hemorrhagic and located in the white matter or gray-white junction. Thrombosis of the deep cerebral veins may lead to bilateral thalamic hemorrhagic infarcts. The superior sagittal sinus is most commonly affected, followed by the transverse sinuses, sigmoid sinuses, and cavernous sinuses. The diagnosis should be suspected in patients with appropriate neurologic complaints and pre-disposing conditions such as hyper-coagulable states, adjacent infections (e.g. mastoiditis) or tumors, dehydration, trauma, pregnancy/post-puerpium, or oral contraceptive use. Approximately 25% of patients, however, have no identifiable pre-disposition. Presenting complaints are quite variable and may include headache, nausea, vomiting, seizures, and neurologic deficits. Mortality ranges from 10-80% and is presently more likely at the lower end of this range. Neonates, the elderly, and debilitated patients are most at risk. Systemic anti-coagulation is the standard treatment, with directed endovascular microcatheter infusion reserved for patients who progress despite adequate systemic anti-coagulation.

MR with MR venography is the imaging modality of choice for diagnosing this condition. Ideally, on pre-contrast images, there should be loss of the normal flow void in the affected sinuses on T1 and T2 weighted images. This can vary depending on the age of the thrombus, however. Post-contrast images will show a filling defect in the affected sinuses. Flow sensitive imaging (2 D time of flight or phase contrast) is best for determining if thrombosis is indeed present. Hemorrhagic infarcts are best evaluated with gradient echo imaging sequences. Diffusion weighted images are also useful.

CT is also of use in the diagnosis of venous sinus thrombosis (as in this case). Pre-contrast CT will show hyperdensity in the affected sinuses. A classic finding is the "delta sign" in superior sagittal sinus thrombosis where a triangular hyperdensity is seen in the sinus. A "reverse delta sign" can be seen on post-contrast CT representing enhancing dura around thrombus in the sinus. Signs of infarction are classically in non-arterial distributions and can be bilateral and hemorrhagic.
Pubblicato da David Spizzichino a 16:00