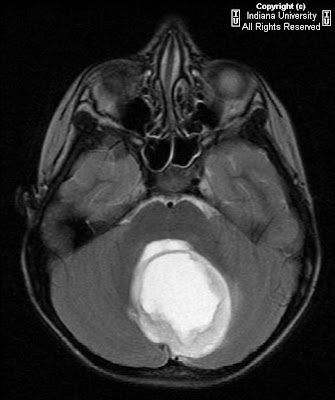 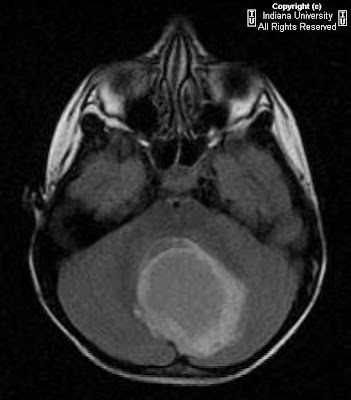 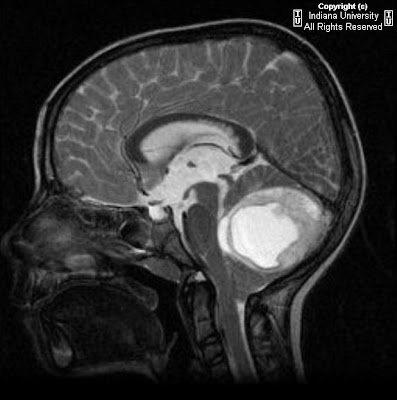 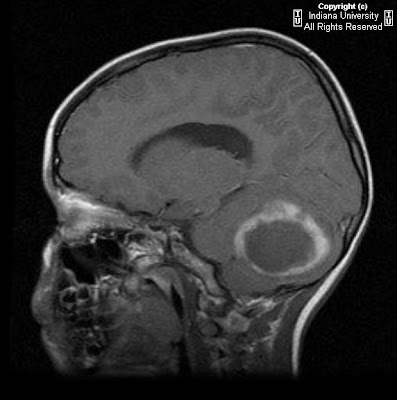 Large posterior fossa mass with central cystic portion and peripheral thick rind with enhancement and effacement of the 4th ventricle and cerebellar tonsillar herniation. There is secondary mild ventricular enlargement with transependymal edema.

Juvenile pilocytic astrocytomas are typically benign tumors that arise in the cerebellum, brainstem, hypothalamic region, or optic tracts. The tumor is classified as a WHO grade 1 benign lesion. Their most common site of origin is the cerebellum. It is the most common tumor to occur in the cerebellum. The medulobllastoma is more common in the posterior fossa but it has 4th ventricle origins rather than the cerebellum itself. The tumor generally is found in patients aged 5-14, but can be seen at any age more rarely. There is no sex predilection. The tumors are associated with neurofibromatosis type 1. Common presentations would include ataxia like in this patient, headache, nausea, vomiting or visual disturbances depending on where it is located. Hydrocephalus secondary to mass effect on the fourth ventricle is responsible for the majority of the presentations.

On imaging the tumors are typically well circumscribed with a large cystic component and a mural nodule. The nodule typically enhances. There can be calcification present but only up to 25% of the time. The tumors have a lot of variability in their appearance; they can be entirely solid with or without cystic degeneration. Vasogenic edema is a very uncommon finding and can be used to differentiate this tumor from others in the differential. They are typically hypo attenuating on CT which is helpful in differentiating from a medulloblastoma which is usually hyper attenuating if not at least iso- to the brain secondary to its closely packed cells.

Prognosis for the lesions is quite good. Surgical resection is the first line therapy if the lesion is accessible. Total resection is often possible in the posterior fossa lesions which can yield a 10-year survival rate is as high as 90%. No adjuvant therapy is utilized in that scenario. Even without total resection the 10-year survival rate is still as high as 45%. Radiation therapy had been employed for incomplete resections, but it remains controversial due to risk of brain radiation. Stereotactic radiation is now more commonly used and has shown some promising results. Chemotherapy is reserved for the rare pilocytic astrocytoma that continues to grow post radiation therapy.
Pubblicato da David Spizzichino a 16:00