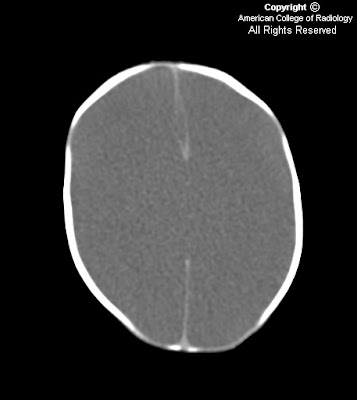 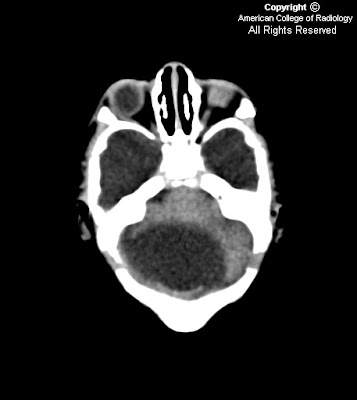 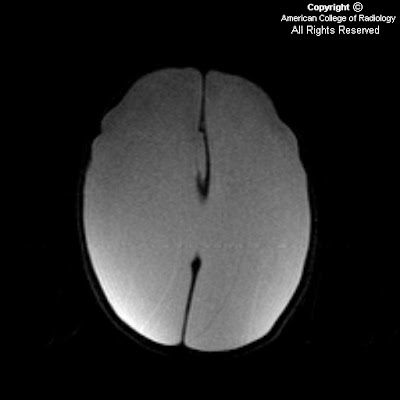 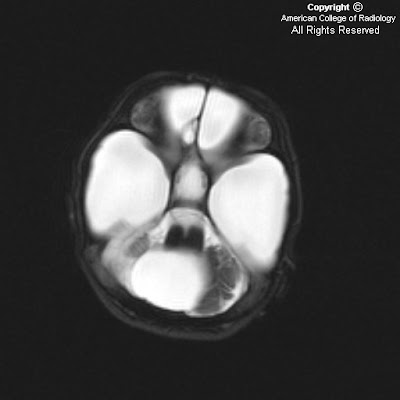 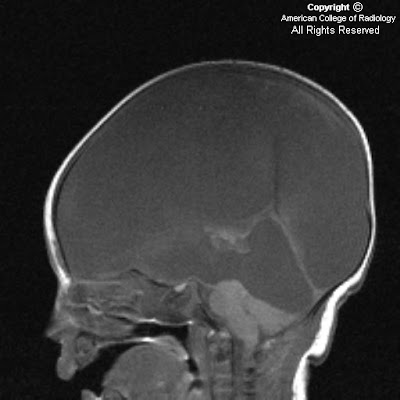 
Hydranencphaly is a congenital malformation of the brain in which there is near total to complete absence of the cerebral cortex and basal ganglia. There is usually preservation of the thalami, cerebral peduncles, pons, midbrain and cerebellum. Although the main etiology is unknown, it is thought to be secondary to an in-utero event. Possibilities include infection (CMV, HSV, Toxoplasmosis), vascular accident, specifically occlusion of the anterior circulation, or diffuse hypoxic-ischemic necrosis due to maternal exposure to carbon monoxide or butane gas.

Hydranencephaly can be difficult to distinguish from extreme hydrocephalus, alobar holoprosencephaly and porencephaly. The presence of residual cerebral cortex helps to distinguish hydranencephaly from the other diagnoses. The absence of the third ventricle and presence of the falx also aids in differentiation since the third ventricle is present in the other diagnoses and the falx is absent in holoprosencephaly.

In utero ultrasound is helpful in diagnosing hydranencephaly. This usually presents as a large cystic mass filling the entire cranial cavity with absence or discontinuity of the cerebral cortex. The appearance of the thalami and brainstem protruding inside a cystic cavity is also characteristic. CT and MRI findings are similar with the absence of most supratentorial structures and preservation of the brainstem and cerebellum. MRI is superior for the detection of cortical remnants.

Prognosis in these children is very poor with most deaths occurring within the first year. Although children with hydranencephaly may appear healthy, developmental delay occurs within a few weeks. Irritability, abnormal muscle tone and seizures are common manifestations.
Pubblicato da David Spizzichino a 16:00