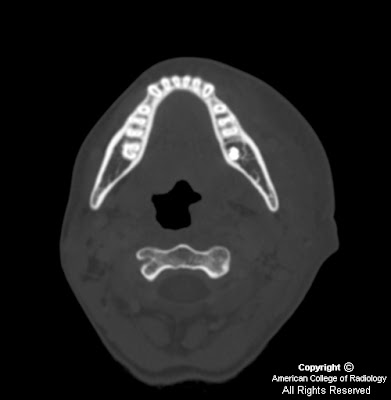 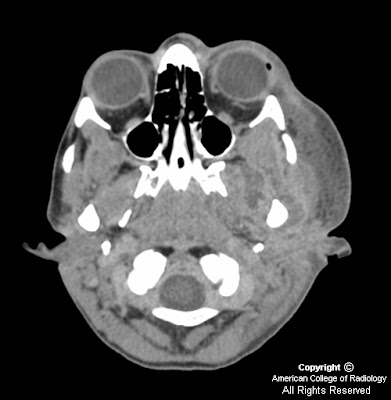 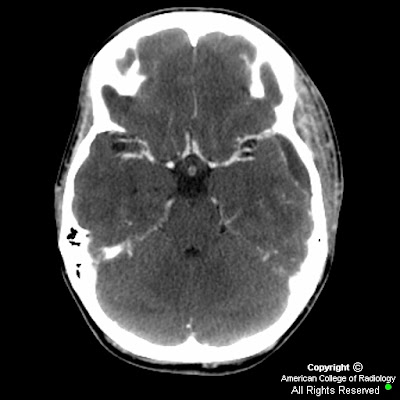 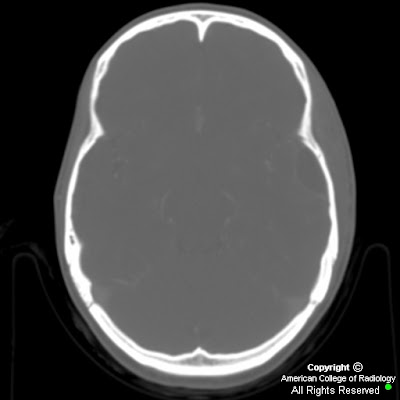 Figure 1: Axial CT image with bone algorithm at the level of C2. There is a lucency in the socket of the extracted molar. The irregular hyperdensity within the socket represents surgical packing that was inserted, and left in place post-dental extraction.
Figure 2: Contrast enhanced axial CT image with soft tissue algorithm at the level of the occiput and C1. Irregular hypodense collections with faint rim enhancing walls are seen within the muscle bellies of the lateral pterygoid and the masseter. There is extensive pre-zygomatic subcutaneous soft tissue fat stranding suggesting an overlying cellulitis.
Figure 3: Contrast enhanced axial CT with brain algorithm at the level of the middle cerebral arteries. There is a subtle hypodense collection with leptomeningeal enhancement lateral to the anterior pole of the temporal lobe. We again note subcutaneous fat stranding and edema within the left temporalis muscle, and overlying the left aspect of the frontal and temporal bones.
Figure 4: Axial CT with bone algorithm at the level of the abnormality. This image confirms that the collection crosses the left coronal suture, therefore confirming that it is located within the subdural space.


A subdural empyema (SDE) is an intracranial collection containing purulent material located between the dura mater and the arachnoid mater. Intracranial subdural empyemas account for up to 22% of all intracranial pyogenic processes. The majority of subdural empyemas occur as a complication of paranasal sinusitis, otitis media, or mastoiditis, and uncommonly as a result of a masticator space infection. In the largest published series of 699 cases of SDE, dental infection was the fifth most common cause accounting for 0.7% of cases.

Fever, seizures and motor deficits are some of the commonly encountered clinical features of SDE. A subdural empyema is a life threatening illness with a mortality rate ranging from 6-35 %.

Intracranial extension of infection from the head and neck can occur by two primary means. Direct extension by erosion through the skull occurs with sinusitis or mastoiditis. Indirect spread, which is a more common route, occurs by retrograde thrombophlebitis via the valveless veins of the basal venous system which connect the intracranial and extracranial spaces. Masticator space infections resulting from osteomyelitis of the mandible from an uncontrolled dental infection can gain access to the subdural space via the foramen ovale or spinosum. Extension into the middle cranial fossa occurs with peri-neural extension along the mandibular division (V3) of the trigeminal nerve or peri-vascular extension along the middle meningeal artery.

Subdural empyemas (SDE) are characteristically crescentic extra-axial fluid collections extending along the cranial convexities. SDE(s) spread aggressively through the subdural space, crossing the sutures of the skull, until limited by the falx cerebri, tentorium cerebelli, base of the brain, or the foramen magnum. They demonstrate rim enhancement post contrast administration, and can lead to mass effect on the adjacent brain parenchyma. If not evacuated, intraparenchymal extension is a possible complication.

MRI has been shown to be superior to CT in demonstrating the presence, extent, and nature of a subdural fluid collection. However, CT scan remains a widely performed exam in this context due to its rapid availability, and accurate assessment of changes related to osteomyelitis.