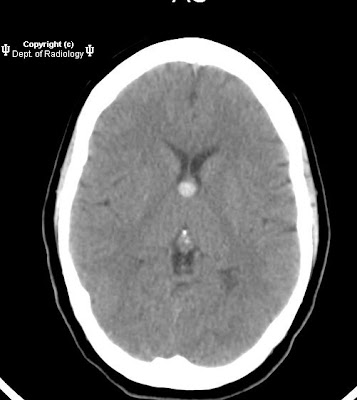 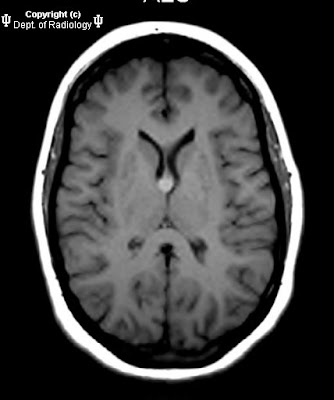 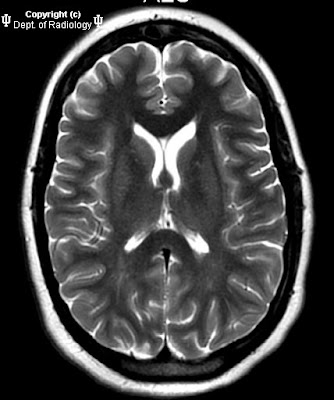 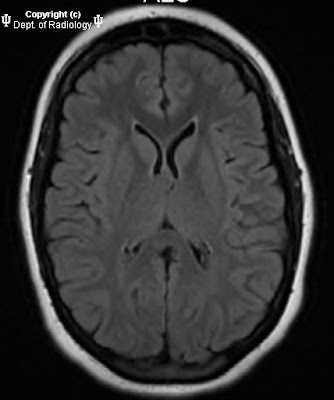 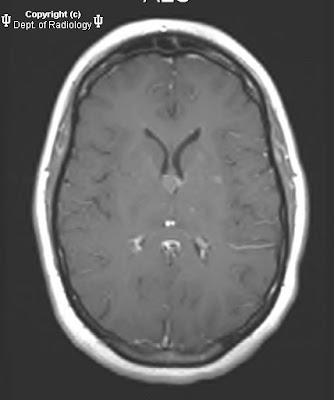 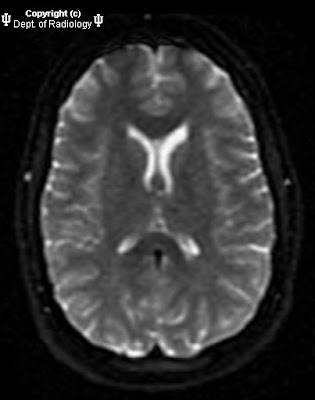 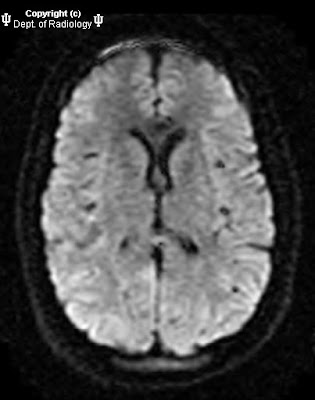 Head CT: A 7 mm diameter homogeneous hyperdense mass is present at the foramen of Monroe. There is no hydrocephalus or areas of hemorrhage.
Brain MRI: An approximately 7 mm in diameter homogeneous mass is identified within the anterior-superior third ventricle near the foramen of Monroe, slightly lateralizing to the right. It posteriorly displaces the anterior aspect of the internal cerebral veins and superiorly displaces the adjacent anterior septal veins, right more so than left. It demonstrates slight T1 shortening and appears isointense to the brain on FLAIR and fast spin-echo T2-weighted sequences. No definite contrast enhancement is identified. There is no suggestion of obstructive hydrocephalus.

Colloid cysts are rare brain lesions that account for approximately 1-3% of primary intracranial tumors. The typical location is in the anterior superior third ventricle. Rare cases have been reported in the lateral ventricles, fourth ventricle, and even outside the ventricular system. Diagnoses usually occurs incidentally in adult patients. Very rarely diagnosed in children. Colloid cysts originate during the development of the nervous system from ectopic endodermal elements which migrate into the velum interpositum. These lesions are lined by cuboidal or stratified columnar epithelium and contain proteinaceous components. This lining accounts for the enhancement that is sometimes seen as in this case. The proteinaceous material is derived from the breakdown products and secretions of the epithelial cells.

In many patients, colloid cysts remain clinically silent. They enlarge slowly or stop growing, allowing a balance to develop between the production and absorption of CSF. Even with this slow growth some patients experience signs and symptoms of hydrocephalus due to the obstruction of the foramina of Monro. They experience headache, memory deficits, and nausea/vomiting. The headache is often positional because the foramina of Monro may only become obstructed in certain positions as the cyst is often somewhat mobile. Cases of sudden death have been reported. Although these lesions are benign, they are often surgically managed since the complication of obstructive hydrocephalus may be life threatening.

Typically arise at the anterior superior portion of the third ventricle
Hyperdense on CT and generally have high signal intensity on T1 and low intensity on T2
May obstruct the foramina of Mono, causing hydrocephalus
Associated with acute / severe / positional headache, and may result in sudden death.
Headache worsens by tilting patient's head forward, causing Foramen of Monro obstruction. This is called Brun phenomenon.
Pubblicato da David Spizzichino a 16:00