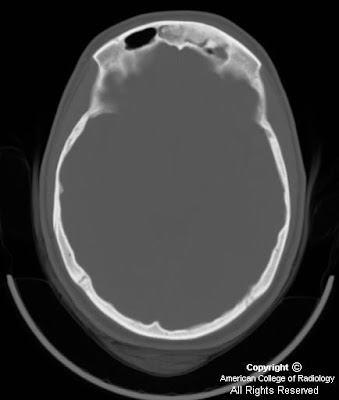 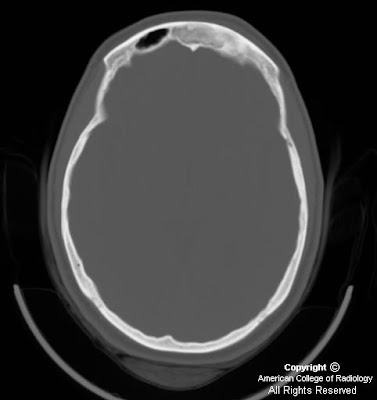 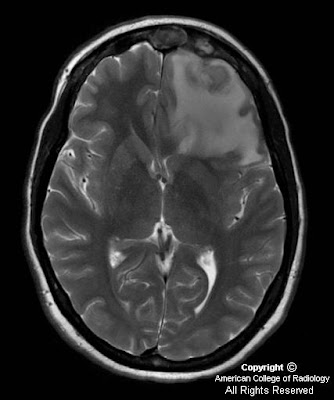 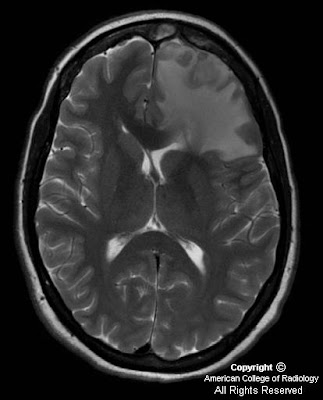 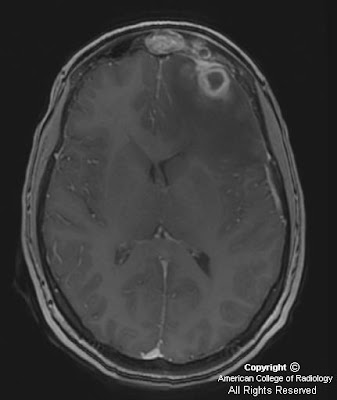 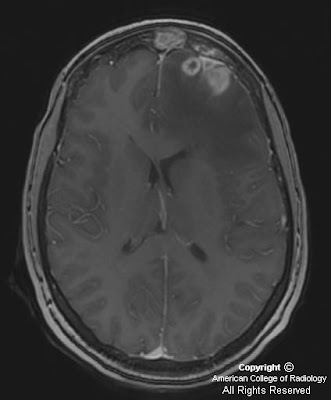 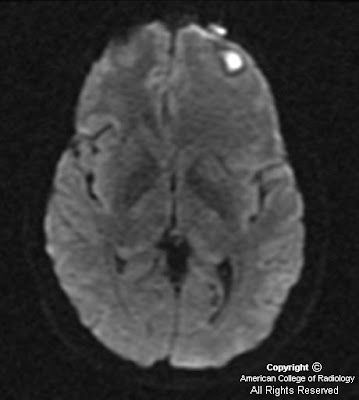 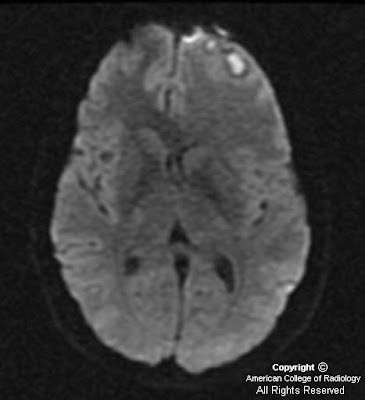 
Brain abscess is an infectious process which results in high morbidity and mortality if undiagnosed and untreated. In today’s era of antibiotics and refined neurosurgical technique, the major obstacle to successful treatment is delayed diagnosis. Noninvasive diagnostic imaging is critical for diagnosis and is directly responsible for improved patient outcomes in the last 10-15 years.

Brain abscess presents as a rapid developing space occupying syndrome usually beginning with a headache, followed by focal neurological deficit or seizure, and may progress to increased intracranial pressure, nausea,vomiting, and loss of consciousness. Fever is absent in 50% of cases as in this case.

Infection occurs by extension from a direct cranial focus or by hematogenous dissemination from an extracranial source with 50% incidence of each. Mastoiditis is the most common cranial source (30%) followed by sinusitis (15%). Hematogenous seeding accounts for 25%, of which endocarditis is the most common cause. No identified cause is found in 20% of cases. Rare causes include retrograde thrombophlebitis from a facial or dental infection, penetrating trauma, meningitis complication, and surgery.

The typical appearance of brain abscess on CT is a focal round lesion with hypodense center and surrounding vasogenic edema. If contrast is given, ring enhancement is seen. Abscess secondary to mastoiditis occurs in the temporal lobe and sometimes the posterior cranial fossa. Paranasal sinusitis results in frontal lobe location, and hematogenous dissemination usually results in multiple lesions following a vascular distribution.

On MRI, brain abscess demonstrates ring enhancement. Compared to other ring enhancing lesions, abscesses exhibit thinner, more regular, and more homogenously enhancing walls. Often, the cortical wall will be thinner. Classically, the lesion will have a T2 hypointense rim. A critical finding usually seen is central restricted diffusion corresponding to the infection products. Necrotic tumors seldom demonstrate restricted diffusion within the necrotic center. A dominant lesion will often demonstrate contiguous smaller satellite lesions. Another helpful finding is surrounding vasogenic edema which invariably is seen with abscess and neoplasm and rarely seen in other ring enhancing or restricted diffusion lesions such as demyelinating lesions. Lymphoma can be a difficult differential diagnosis as lymphoma usually restricts diffusion, causes vasogenic edema, ring enhances, and can have central necrosis. Clinical history of immunocompromise and location are occasionally helpful to differentiate from abscess.