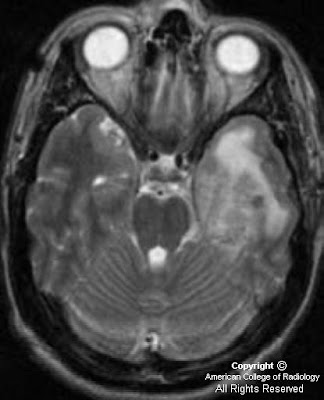 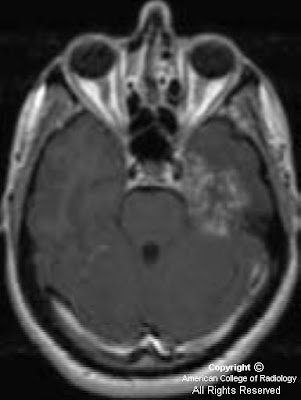 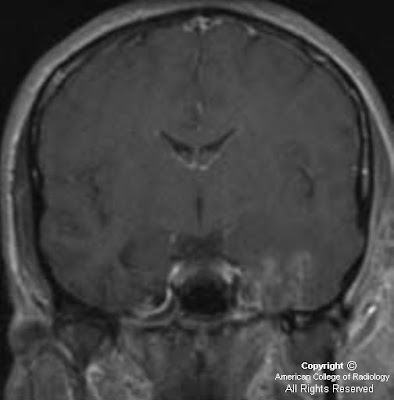 
CNS Schistosomiasis is caused by infestation with trematode (fluke) worms. The host is the freshwater snail that releases Schistosoma cercariae into the water. The cercariae infect humans percutaneously and transform into schistosomula. The schistosomulae migrate to the lungs and liver and then descend to the mesenteric venous system.

Characteristic MR findings demonstrate a central linear enhancement, surrounded by multiple enhancing punctate nodules 1-2 mm in diameter, clustered in a masslike structure with an arborized appearance. On T2-weighted images, the lesions are hyperintense with associated surrounding vasogenic edema and mass effect. This pattern of enhancement has not been observed in association with other CNS worm infections or disease processes. The differential diagnosis for Schistosomiasis may include cerebritis, metastatic disease, tuberculosis, sarcoidosis and possibly anaplastic astrocytoma.

At biopsy, the enhancing nodules seen in the patient were thought to represent granuloma formation with extensive surrounding inflammation and possible venous congestion. Such granulomatous lesions are believed to represent either military pseudotubercles or confluent granulomata containing fibrosis, necrosis, hemorrhage, thrombosis, demyelination, calcification, and arteritis. The morphology and placement of the spine (absent, lateral, or terminal) of the ova can be used to identify the schistosomal species. S.mansoni has a broad lateral spine (as seen in our 32-year-old patient). S. haematobium has a prominent terminal spine, and S.japonicum has a rudimentary or absent spine. It is postulated that the central linear enhancement that was observed is the result of slow blood flow and local venous obstruction caused by the anomalous migration of the adult worm in the leptomeningeal veins. Such placement might result in the concentration of ova at a focal region, forming a nodular mass.

Although the enhancement pattern observed may not be a sensitive indicator for CNS schistosomiasis, it is found to be a specific one. An early diagnosis may be made on the basis of the contrast-enhanced T1 weighted MR imaging findings alone. Early diagnosis, along with treatment, will lead to a more favorable outcome. The patient was found to have complete resolution of abnormal findings on follow-up imaging studies after undergoing treatment with Praziqunatel combined with corticosteroid therapy.
Pubblicato da David Spizzichino a 16:00