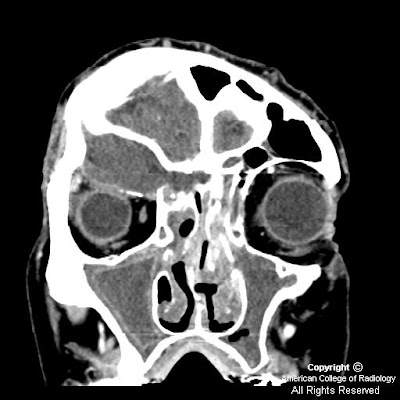 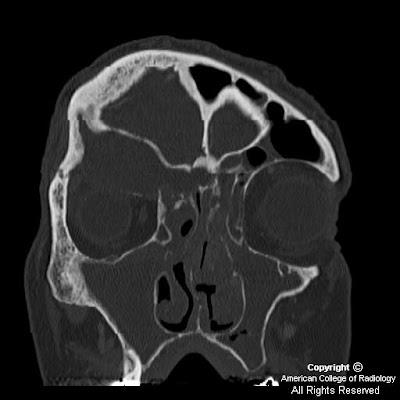 There is a large, expansile mass in the right frontal sinus crossing the midline, measuring 2.3 x 5.7 x 3.8 cm (AP, transverse, cephalocaudad dimensions). This mass extends inferiorly into the right orbit, pushing the right globe inferiorly and anteriorly. There is discontinuity of the ethmoidal margin. However, there is no definite extension of the mass into the brain parenchyma. These findings are consistent with a frontal sinus mucocele. Also noted is extensive sinus disease involving the other visualized paranasal sinuses.

Mucoceles are important diagnoses to make due to their expansile nature. They have the ability to erode through adjacent bones, including the base of the skull to result in intracranial extension. Mucoceles can also involve the orbital cavity, resulting in proptosis and displacement of the globe. Orbital involvement may also affect branches of cranial nerve III. They can become inflamed and fill with pus (pyocele) or pus and mucus (mucopyocele). Clinically, patients experience symptoms which occur as a result of localized mass effect and inflammation. Depending on the extent of the mucocele and the paranasal sinus affected, patients may present with intractable headaches, orbital discomfort, decreased visual acuity, a visual field defect, and facial pain.

Plain film radiographs of the sinuses will reveal smooth, expansile enlargement of the affected paranasal sinus. The adjacent bone may also be thinned secondary to the expansile nature of the lesion. The sinus is typically completely opacified. Further work-up includes a CT of the maxillofacial bones, which will reveal a uniform non-enhancing, low-attenuating expansile mass in the paranasal sinus. There may be regions of hyperdensity within the lesion representing inspissated mucus. There may also be bone remodeling and thinning but without evidence for bone destruction. T1-weighted MR images depict mucoceles as an expansile and hyperintense abnormality of the affected paranasal sinus. T2-weighted MR images further characterize a mucocele as a hyperintense lesion with greater signal intensity than that seen on the T1-weighted images. The signal intensity will further depend on the state of hydration and contents within the mucocele (protein, hemorrhage, and calcification).

The preferred treatment of mucoceles is surgery with sinus reconstruction. Surgical treatment includes conservative options (marsupialization of the mucocele) and radical options (removal of the mucosa and obliteration of the sinus). If possible, it is important to re-establish sinus drainage to prevent mucocele recurrence. The resected mucosa may be normal or demonstrate areas of squamous metaplasia. Endoscopic sinus surgery has played a larger role in management of mucoceles in recent years. Despite surgery, mucoceles often recur, warranting long-term follow-up.
Pubblicato da David Spizzichino a 16:00