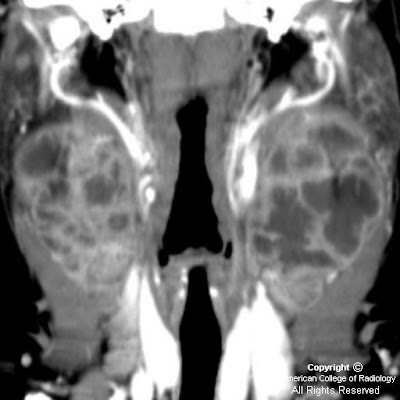 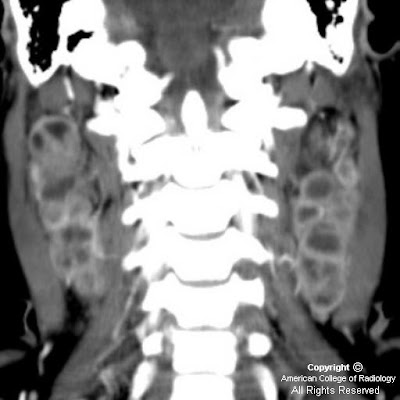 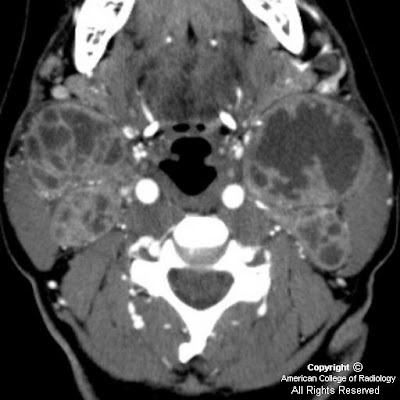 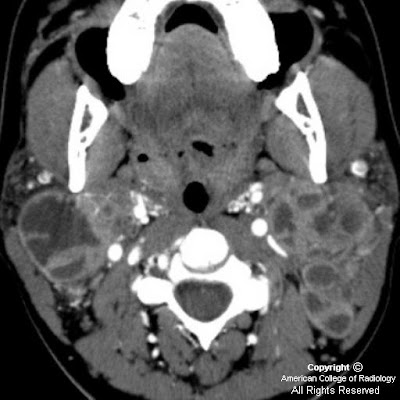 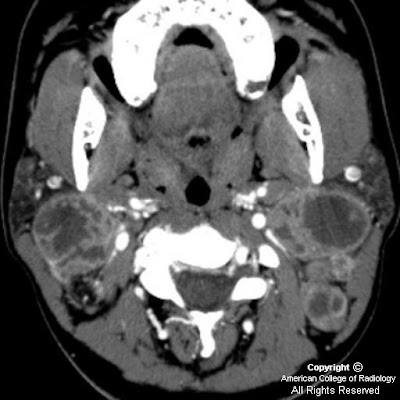 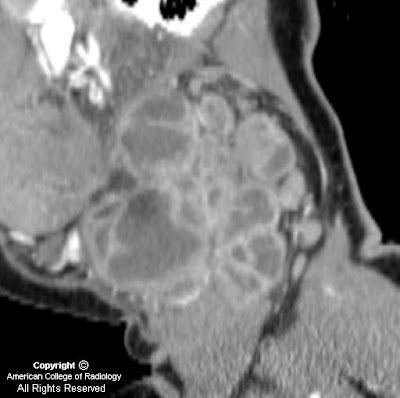 
Scrofula, or infectious cervical lymphadenitis, is a term predominantly applied to tuberculous and non-tuberculous mycobacterial infections (NTM) affecting the cervical lymph nodes. Humans are the only reservoir for M. tuberculosis. Other tuberculous bacilli that cause disease in humans are M. bovis, and M. africanum, which most often cause extrapulmonary disease. NTM are ubiquitous, and reside in the soil. They can be found in contaminated water, dairy products, eggs, dust, and even tap water. Approximately 95% of adult scrofula cases are caused by mycobacterium tuberculosis, while the remaining 5% are caused by NTM, such as M avium intracellulare, M scrofulaceum, M kansasii and M chelonei. In children, this statistic is reversed, with NTM responsible for up to 92% of scrofula cases.

Scrofula produces lymph nodes that are discrete, firm, and typically nontender, in contrast with the lymphadenopathy associated with acute infection that is often tender. A firm mass of matted nodes may become apparent with disease progression, and if untreated, lymphadenopathy can become fluctuant with draining fistulas. Enlarging nodes may compress the esophagus causing dysphagia. The presence of systemic symptoms is variable and more likely in immunocompromised patients.

Scrofula presents with a variable imaging appearance depending upon the stage of the disease. Tuberculous lymphadenitis may be unilateral (90% in adults) or bilateral and is usually found in the internal jugular nodal chains (levels 2 - 4) and the spinal accessory chains (levels 5a and 5b). In the early infectious phase, non-necrotic nodes have homogeneous signal intensity and enhance homogeneously with contrast on both CT and MR. As the disease progresses and nodes become necrotic, CT images demonstrate characteristic central low density, representing necrosis, with a thick rim of enhancement. Peripheral contrast enhancement reflects hyperemia of the inflamed lymph node capsule or increased lymph node vascularity. On MR images, the necrotic center of the nodes will show intermediate signal intensity on T1-weighted images, low signal intensity on T2-weighted images, and will enhance with contrast. The surrounding granulation tissue, with its inflammatory hypervascularity and increased vascular permeability, will be markedly hyperintense on T2-weighted images. The nodes may become multiloculated and matted, simulating metastatic cervical disease both on imaging and clinically. Despite extensive necrosis, infiltration of adjacent fat planes is minimal, which may differentiate this process from other infections or malignant nodal disease. Chronic or post-treatment nodes are characterized by fibrous and calcific elements that are easily identified on CT. Calcification can also be seen in scrofula caused by NTM. On MR, treated nodes are homogeneously hypointense on both T1 and T2-weighted images, and do not enhance with contrast.

Diagnosis usually requires fine needle aspiration (FNA) for histologic examination and culture. Once scrofula is diagnosed, it is important to determine the exact etiology, as tuberculous scrofula is treated medically and NTM infections are treated surgically. Lymphadenopathy may initially worsen during antituberculous therapy, representing an immune response to killed mycobacteria. Surgical intervention is reserved for complications such as abscess formation and draining sinuses. The treatment of choice for NTM infections is complete surgical excision of all affected tissue.
Pubblicato da David Spizzichino a 16:00