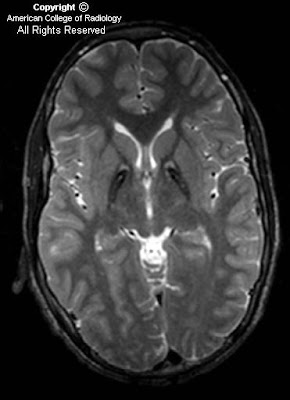 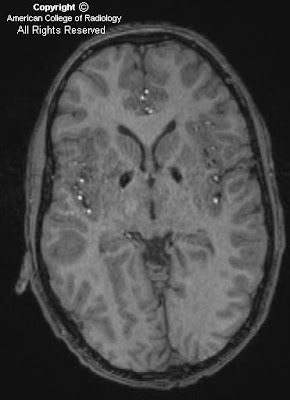 
Hallervorden Spatz disease is a rare neurodegenerative condition whose exact pathogenesis is unknown. Abnormal accumulation of iron in the brain, specifically in the globus pallidus and substantia nigra, is felt to play a predominant role in the neurodegeneration caused by the disease. A mutation in the pantothenate kinase gene leads to enzyme deficiency and subsequent accumulation of cysteine and iron chelates. The excess iron is deposited in the basal ganglia and damages neuronal structures.

Symptoms begin early in life, typically in early adolescence, and include extrapyramidal and gait abnormalities. Slow movements, rigid extremities, dystonia, tremors and speech abnormalities are typical findings. No cure exists, and therapy is aimed toward neurological symptoms. The typical clinical course is that of rapid progression, with death in early adulthood in most cases.

Imaging findings are usually classic, and typically described as the “eye-of-the-tiger sign”. This results from symmetric T2 prolongation in the globi pallidi with peripheral hypointensity and hypointensity in the substantia nigra. There is no associated enhancement of the areas of abnormal signal. The neural damage from abnormal iron accumulation results in diminished NAA on spectroscopy. The areas of iron deposition would be more conspicuous on susceptibility weighted images. In cases where the classic history and imaging findings do not lead to the diagnosis, other pathologies that preferentially involve the globi pallidi should be considered. These include metabolic derangements such as methylmalonic acidemia, Kearns-Sayre syndrome, Canavan disease and toxic and ischemic encephalopathies caused by anoxia, carbon monoxide and cyanide poisoning. 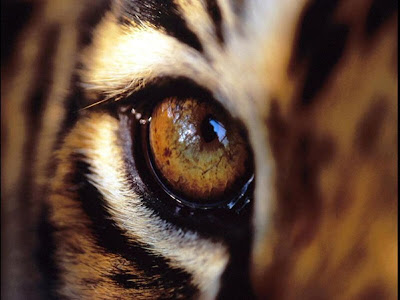