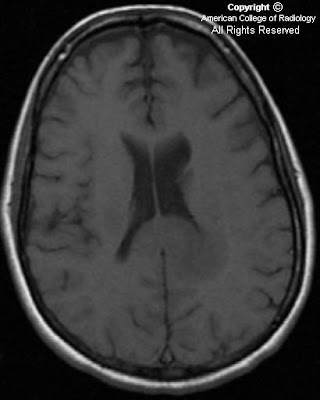 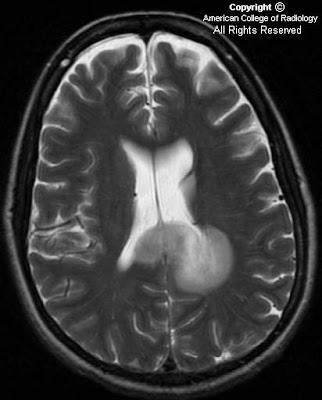 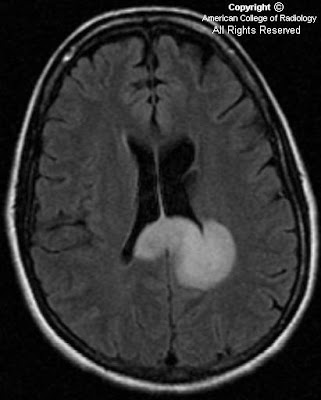 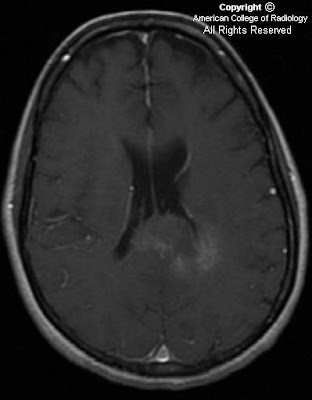 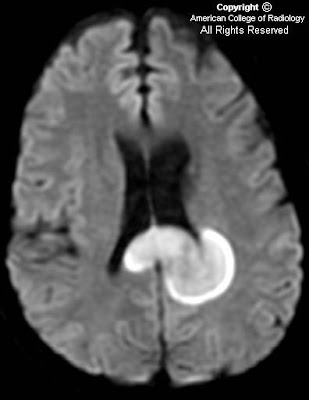 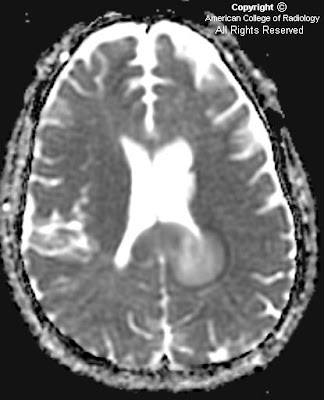 Figure 1, Figure 2, Figure 3, and Figure 4 demonstrate a hypointense T1, hyperintense T2 weighted expansile mass involving the splenium of the corpus callosum. The mass has well defined borders and partially effaces the atrium (trigone) of the left lateral ventricle. There is mild patchy enhancement (Figure 4). DWI images demonstrate increased signal throughout, but only the even more hyperintense rim (Figure 5) demonstrates true restricted diffusion on ADC images (Figure 6). The remainder of the mass is increased signal on ADC images, indicating increased diffusivitiy.


A noncomprehensive list of lesions involving the corpus callosum includes the following: masses such as lipomas, lymphoma, glioblastoma and astrocytoma, and metastases; demyelinating diseases such as multiple sclerosis, progressive multifocal leukoencephalopathy, and Marchiafava-Bignami disease; vascular lesions such as infarctions, vascular malformations; and trauma. More focal lesions with restricted diffusion involving the splenium can also be seen in patients with epilepsy receiving antiepileptic drugs and in the setting of hypoglycemia. Narrowing the differential possibilities to a few relevant entities requires clinical history and detailed analysis of the imaging characteristics. Many of the disease processes mentioned have some unique characteristics that may help favor a particular diagnosis. However, in spite of a full clinical history and an arsenal of imaging tools, a biopsy may ultimately be necessary, as was the case with this patient.

The diagnosis in this case was tumefactive demyelination, which may be thought of as a solitary demyelinating lesion measuring greater than 2 cm and with characteristics that mimic neoplasm. Because of this, tumefactive demyelinating lesions are commonly diagnosed as such only after biopsy. Several imaging characteristics suggestive of such a lesion have been described. These include a large lesion with circumscribed borders and little or no mass effect or surrounding edema. Demyelinating lesions in general also tend to demonstrate an incomplete ring of enhancement, with the nonenhancing component facing the gray matter. The enhancing rim is felt to represent the leading edge of demyelination, and therefore usually faces the white matter. Some foci also have been shown to have decreased perfusion in some studies, which would help distinguish them from glioblastoma and lymphomas.

The abnormality in our case does illustrate a few of these characteristics, such as a circumscribed border and lack of surrounding edema. The lesion did demonstrate increased diffusivity on DWI/ADC maps, which would argue against a highly cellular tumor like lymphoma and a high grade glioma. Active foci of demyelination may demonstrate restricted diffusion. In our case, the thin peripheral rim of restricted diffusion may represent an active edge of demyelination. The mass effect on the atrium of the left lateral ventricle is a confounding factor that can be associated with tumefactive demyelination or neoplasms. Metastases usually elicit a large amount of edema which was noticeably absent in this case. Infarction is also unlikely given the patient’s age and based on the imaging characteristics of the abnormality. Infarctions involving the corpus callosum are uncommon because of the ample blood supply from the anterior and posterior circulation. Unfortunately, none of these features is specific enough to warrant watchful waiting, and therefore a biopsy was performed.
Pubblicato da David Spizzichino a 16:00