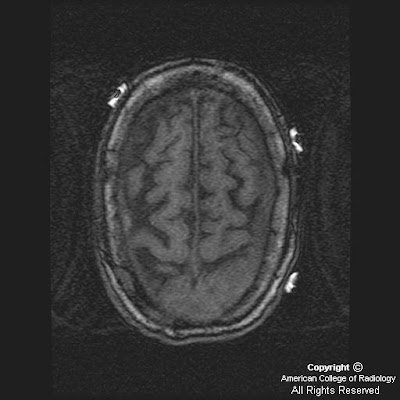 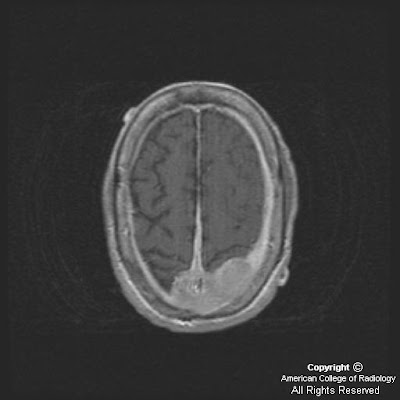 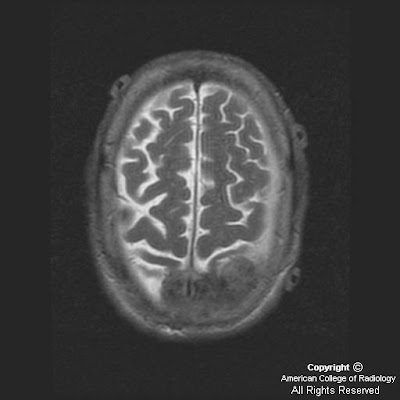 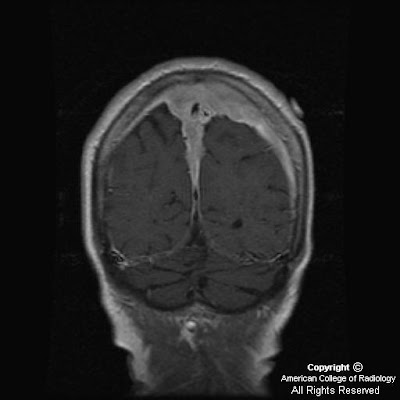 
There is an extra-axial, dural based mass predominantly in the high left posterior parietal region which is relatively isointense signal on TI (Figure 1) and T2 (Figure 2) sequences.
The lesion demonstrates homogeneous contrast enhacement on post contrast sequences, (Figure 3). Extension along the interhemispheric fissure (Figure 4), encasement of the superior sagittal sinus (Figure 4) and extension across midline to the right (Figure 4) is demonstrated.


Plasmacytomas of the dura are uncommon plasma cell tumors that may occur as a solitary neoplasm or, more commonly, in association with multiple myeloma. The latter is usually accompanied by multiple lytic lesions of the skull. In distinction, solitary craniocerebral plasmacytomas are relatively benign and potentially curable. Therefore, distinction between the two has important clinical consequences. The differential diagnosis for dural plasmacytoma includes metastasis, lymphoma, dural sarcoma, plasma cell granuloma and meningioma.

Dural plasmacytomas are often confused with meningiomas (the most common extra-axial neoplasm found in adults) as the two have similar features and imaging characteristics. Both occur more commonly in women during the 5th decade of life with a predilection for similar sites of involvement including the cerebral convexities, sphenoid ridge, falx, and tentorium. On MR both may appear nearly isointense to brain on T1W images and iso- to hyperintense on T2W images with marked contrast enhancement. A characteristic "dural tail" and intratumoral calcifications may be seen in both lesions. Other manifestations of intracranial plasmacytoma may include diffuse leptomeningeal disease and rarely, intracerebral lesions with vasogenic edema.

These patients may present with intracranial hypertension and/or focal neurological signs from the dural origin of the tumor. Clinically, individuals with solitary dural plasmacytomas can be distinguished from those with multiple myeloma by the absence of hypercalcemia, renal insufficiency, anemia, lytic osseoues lesions, bone marrow plasmacytosis, and elevated serum or urinary paraprotein. Following surgical decompression and/or local radiotherapy for a solitary dural plasmacytoma, the prognosis is fairly good. This is in contrast to patients with plasmacytoma and multiple myeloma who typically have a much poorer prognosis.
Pubblicato da David Spizzichino a 16:00