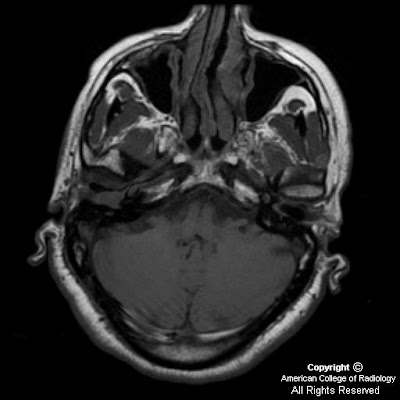 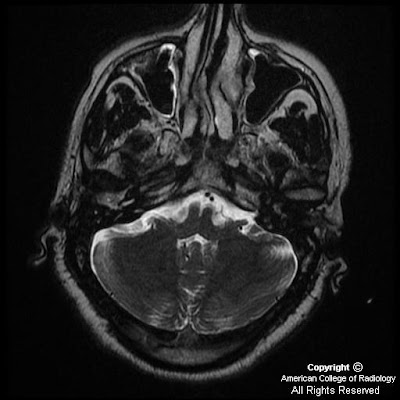 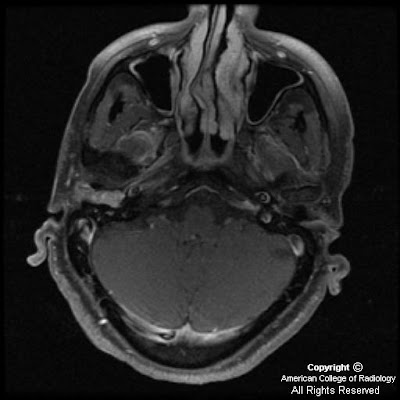 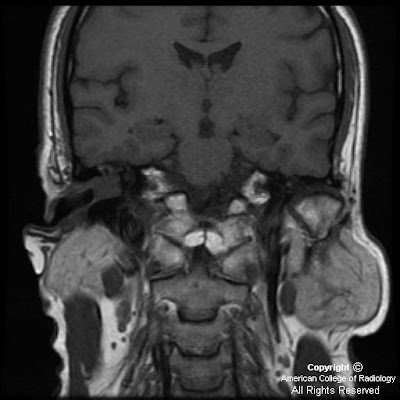 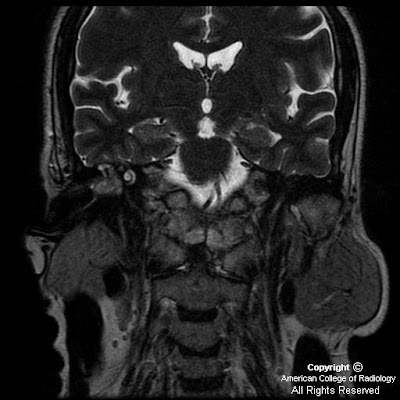 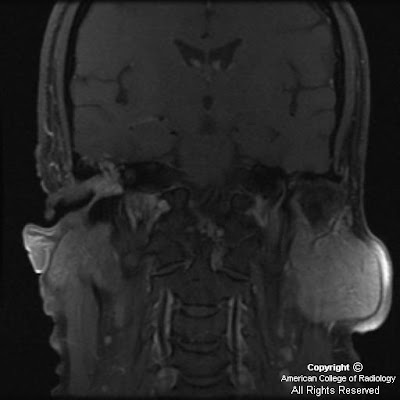 Figure 1, Figure 2, Figure 4, Figure 5 are axial and coronal T1 and T2 weighted images respectively. Figure 3 and Figure 6 are post contrast T1 weighted fat saturated images. A soft tissue mass is seen in the above images in the external auditory canal appearing isointense on T1 images and hyperintense on T2 images with post contrast enhancement. The middle ear is invaded with no intracranial extension. The internal carotid artery is uninvolved.


Carcinomas of the external auditory canal are rare and form less than 0.2% of head and neck malignancies. Various histological subtypes have been described, the commonest being squamous cell carcinoma followed by adenoid cystic carcinoma.

Squamous cell carcinoma of the external auditory canal is predominantly a disease of the elderly with slight male preponderance. Exposure to radiation therapy for head and neck malignancies, especially nasopharyngeal carcinoma, is a risk factor. The tumor is locally aggressive with a relatively lower tendency to metastasize.

Extent, description and staging of the tumor is based primarily on imaging as the region is inaccessible to a complete and satisfactory clinical examination. CT scan of the temporal bone is a routine investigation, and is done to look for bony erosion. Small tumor extent and more outer location of ear malignancy such as the auricle or external ear canal has better prognosis with a higher 5-year survival rate.

Surgical excision is the mainstay of management. There is no consensus over the surgical procedure and approaches vary from en bloc resection to piecemeal removal of the tumor. Invasion of the carotid, middle or posterior fossa renders the tumor inoperable. Any nodal involvement is regarded as advanced disease (stage III and IV) and changes the stage irrespective of the T status of the University of Pittsburgh TNM Classification.

In early stages the tumor is treated by en bloc resection, confirming negative margins, with post operative radiotherapy not offering a documented survival advantage over surgery alone. On the other hand, in advanced stages surgery is routinely followed by radiation and topical chemotherapy (5-FU mostly).
Pubblicato da David Spizzichino a 16:00