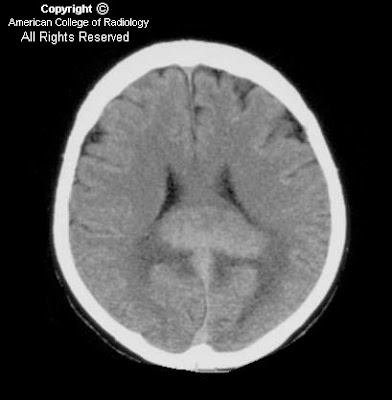 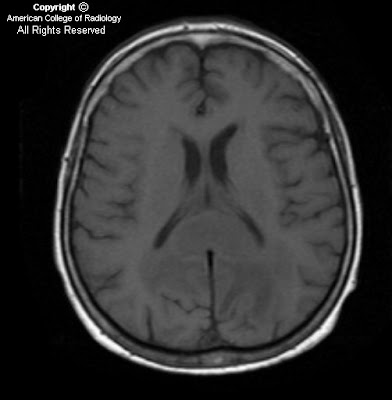 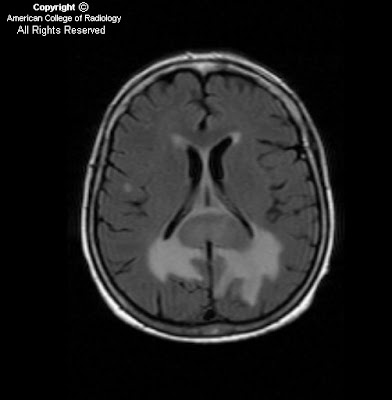 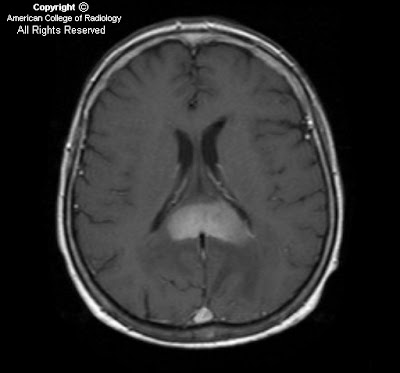 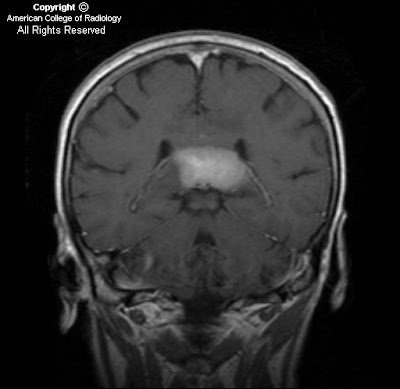 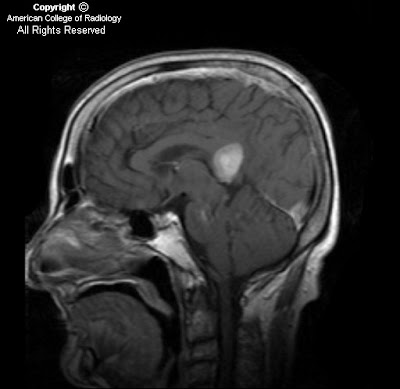 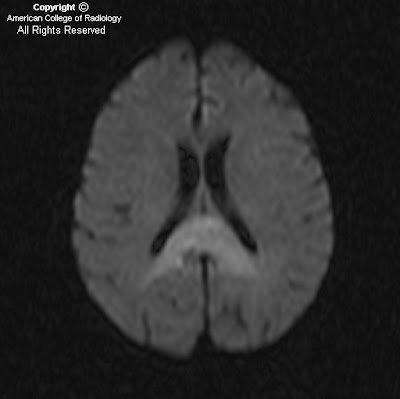 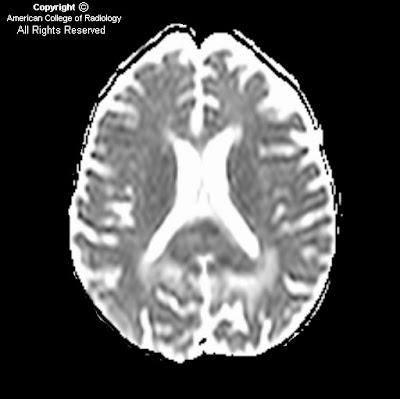 Figure 1: Axial CT show hyperdense lesion of the splenium. The CT hyperdensity is due to the hypercellularity of lymphoma.
Figure 2: Axial T1 demonstrates a low-signal mass centered in the splenium of the corpus callosum.The lesion is surrounded by a considerable amount of edema.
Figure 3: Axial T2-FLAIR: the mass is low signal on T2 images which is typical of PCNSL. There is edema surrounding the lesion.
Figure 4, Figure 5, Figure 6: T1 post gadolinium axial and coronal images demonstrate avid and homogenous enhancement of the solid mass, centered in the splenium of the corpus callosum.
DWI (Figure 7) and corresponding ADC map (Figure 8) reveal a restriction of diffusion, compatible with the hypercellularity of lymphoma.


PCNSL is classified as an extranodal non-Hodgkin lymphoma that originates within the CNS and is confined to it at the time of diagnosis. In 90% of cases PCNLS is a non-Hodgkin B-cell lymphoma, usually of the large cell type (WHO). PCNSL is the most frequent brain tumour in immunocompromised patients, such as AIDS, and transplant recipients, although with the introduction of HAART therapy, the incidence rate in the AIDS group declined. Meanwhile PCNSL affects with increasing frequency immunocompetent patients accounting for 3% of all primary brain tumors diagnosed in the United States from 2000-2004. Median age of occurence is 63 years in immunocompetent host and 35 years in immunocompromised host.

The most characteristic presentation of PCNSL is progressive focal symptoms, followed by nonspecific mental status or personality change and cognitive function decline. Immunocompetent patients have no clear risk factors for developing PCNSL and it is slightly more common in men. Patients with AIDS developing PCNSL generally have CD4+ counts less than 30/mm3.

PCNSL is generally an aggressive disease with a median survival of only a few months after resection alone and as long as 30 months with high-dose methotrexate-based chemotherapy.

PCNSL can present as a discrete or multifocal lesion; immunocompetent patients are more likely to have a solitary lesion. The majority of lesions are supratentorial, in the cerebral hemispheres. PCNSL are typically located in the periventricular white matter. The densely packed lymphoma cells and their high nuclear-cytoplasmic ratio account for the hyperdense appearance of PCNSL on CT, the isointensity/hypointensity relative to gray matter on T2 and the restriction of diffusion as seen in DWI/ADC images. These features help in distinguishing PCNSL from most brain tumors. Most lesions enhance after administration of contrast material and in the majority of cases the pattern of enhancement is homogenous.

Gallium-67 citrate scans have been used to evaluate neoplastic and inflammatory (including infectious) diseases. There are four imaging peaks used: 93,184,296, and 388 keV. The usual dosage used is 4-6mCi (148-222 MBq), however slightly higher doses (8-10mCi) may be used for better images. Imaging in the evaluation of neoplasms is performed 48 hours after administration of the radiotracer. The mechanism of neoplastic Gallium uptake may be mediated by transferrin proteins which form complexes with the radiotracer and are taken up by the malignant cells.

Gallium scans can be recognized by their “coarse” images. There is normal physiological uptake seen in the nasopharynx, bowel, liver, lacrimal glands, and the skeleton. Gallium-avid tumors include lymphoma, hepatocellular carcinoma, and lung cancer. The resolution of a Gallium scan is on the order of one centimeter. The sensitivity in detection of Hodgkin lymphoma is approximately 85-90%. However, with non-Hodgkin lymphoma, the sensitivity is based on the histological cell type and grade. Gallium scans may also be used in post-treatment lymphoma patients where a negative scan is evidence for successful treatment.
Pubblicato da David Spizzichino a 16:00