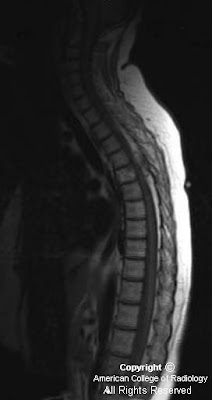 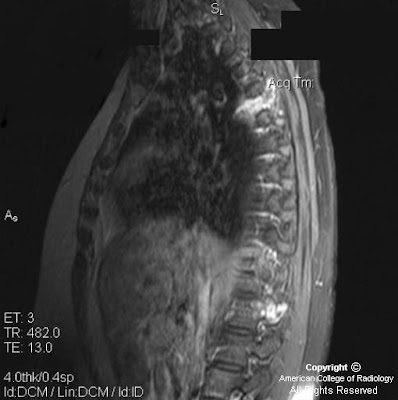 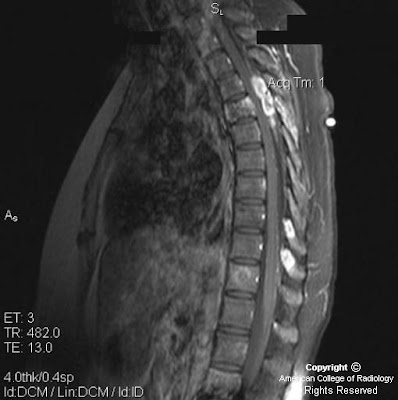 Figure 1: Sagittal T1 image of the thoracic spine demonstrates a mixed signal soft tissue epidural mass posterior to the cord at the T4-T5 level causing posterior impression upon the thecal sac. There is also a T1-bright infiltrating lesion within the T5 vertebral body.
Figure 2 and Figure 3: Sagittal post-contrast T1 imaging shows an enhancing lesion with both bony and soft tissue components. This was localized to the right paraspinal soft tissues and there is compression of the cord. Bony involvement is seen in the vertebral bodies of T11 and L1 and in the posterior elements of multiple other thoracic levels.


Spinal angiolipomas are a rare entity that are histologically benign. These fatty tissue lesions have been quoted in the literature as representing 0.14-1.2% of all spinal axis tumors. Spinal angiolipomas are typically found in the thoracic vertebrae owing to the spine's regional variation in blood supply. The vast majority of epidural noninfiltrating angiolipomas are posterior or posterolateral in location. Patients are more commonly female and usually present in the fourth or fifth decades of life. Symptoms are slow and progressive over several months, with cord compression commonly seen at presentation. Other commonly seen symptoms include: back pain, sphincter dysfunction, progressive paraparesis, lower extremity paresthesias, and hyperreflexia. In rare cases, symptomatology may be acute due to factors such as spontaneous hemorrhage, venous thrombosis, or “steal” phenomenon.

Classically, spinal angiolipomas are T1 hypointense enhancing epidural lesions with or without bony involvement. The intraosseous component is usually heterogenous on T1 imaging. MR is frequently obtained due to patients symptoms of possible cord compression, and it is important to rule this entity out. Differential diagnosis would include hemangiomas, metastatic melanoma and lipid-rich metastases like liposarcoma and the clear cell variant of renal cell carcinoma. On CT, these are indistinguishable from hemangiomas. When viewed in bone windows, the typical “corduroy” appearance with linear streaks of high attenuation can be seen as well as the more stippled foci of increased density seen on axial imaging. To distinguish the two, a pathologic diagnosis is essential

The mainstay of treatment for patients with neurologic symptoms is cord decompression. When possible, surgical excision is preferred with an excellent prognosis for these patients. Heavy bleeding is typical, especially with the infiltrating type owing to the rich vascularity of these lesions. Typically, the neurosurgeon will have multiple blood products available at the time of surgery. For the case discussed above, the estimated blood loss at the time of surgery was 1800cc with 5 units of packed red blood cells administered.
Pubblicato da David Spizzichino a 16:00