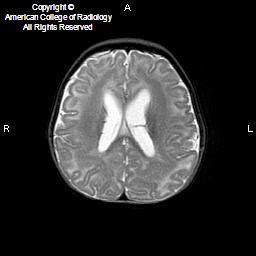 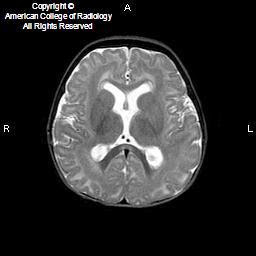 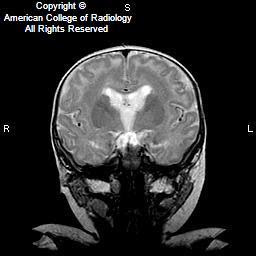 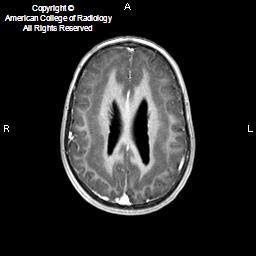 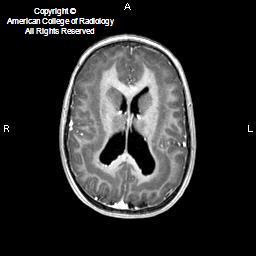 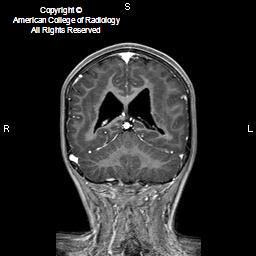 Case 1: Axial and coronal T2-weighted images of the brain in a 7-month-old girl with seizures demonstrate a band of isointense signal within the subcortical white matter, characteristic of band heterotopia.
Case 2: Axial and coronal T1-weighted images demonstrate band heterotopia, better seen in this preadolescent girl due to completion of myelination.


Band heterotopia is a rare neuronal migration anomaly which manifests as homogenous bands of gray matter are interposed between the lateral ventricles and cortical mantle with normal appearing white matter on either side. The overlying cortex may be normal, pachygyric, or display a simplified gyral pattern with short gyri and shallow sulci. At least six morphologically distinct subtypes have been described. Band heterotopias represent a subset of gray matter heterotopia which also includes subependymal and subcortical heterotopia subtypes.

Band heterotopia typically affects female patients as a result of an X-linked dominant inheritance pattern secondary to abnormal function of the doublecortin (DCX) gene (Xp22.3-p23) or less frequently the LIS1 (17p13.3) gene. Male patients can be affected due to sporadic mutations of these genes (41 reported cases in the literature by D’Agostino, et al in 2002). The rate of detectable mutations involving DCX or LIS1 in male patients (42%) is lower than the rate of 85% described in female patients. Dysmorphic features described in patients with band heterotopia include microcephaly (most common), wide nasal bridge, high arched palate, and short stature.

The clinical presentation of band heterotopia can range from normal to nearly normal intelligence and mild developmental delay to frank mental retardation. Seizures are often also present and may begin in the first decade, ranging from partial to generalized or multiple seizure types. The discovery of the underlying brain malformation is due to the onset of seizures in 65% of patients. Eventually 95% of patients with band heterotopias will develop epilepsy. Seizures associated with band heterotopia are often refractory to medical therapy, and surgical therapies such as callosotomy may be performed in these patients. In the series of 30 male patients published in 2002, 46% of patients were refractory to medical therapy and experienced up to 20-30 seizures daily despite trails of multiple therapeutic regimens. Affected male patients tend to have either mild or severe symptoms, whereas, female patients tend to have symptoms within the mild to moderate range of the spectrum from minimal cognitive impairment to severe mental retardation. Posterior involvement, in particular the partial posterior and intermediate posterior subtypes, occur more commonly in male patients. Frontal and diffuse subtypes are more often present in affected female patients.
Pubblicato da David Spizzichino a 16:00