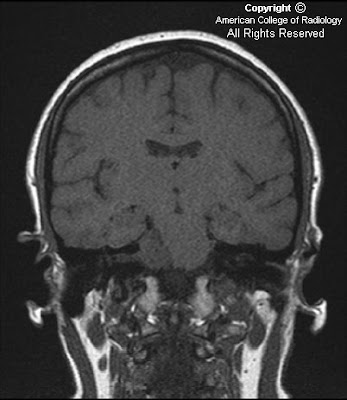 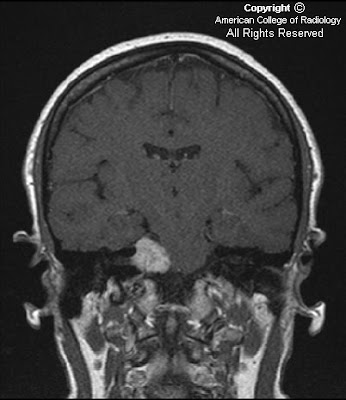 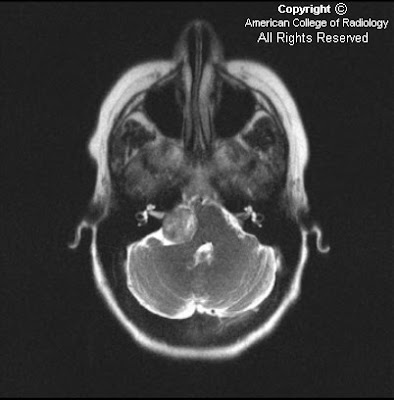 
Schwannomas are typically benign, slow growing tumors that arise from the schwann cells, which envelop and myelinate cranial, spinal, and peripheral nerves. These cells are the peripheral analog of oligodendrocytes, which serve the same function within the brain substance. In the skull, the most common location for schwannomas is within the CPA, where they arise from the vestibular portion of the eigth cranial nerve. Patients often present with tinnitus and hearing loss. Curiously, most patients do not demonstrate clinical symptoms of vertigo, despite vestibular nerve involvement. This is thought to be secondary to the slow-growing nature of the tumor, which allows for chronic compensation.

While small (less than 2 cm) schwannomas demonstrate a nonspecific, homogeneous appearance, they can become heterogeneous (as in our case), cystic, and even hemorrhagic as they enlarge. MR is the imaging modality of choice and typically demonstrates a round mass, which forms an acute angle with the petrous bone. On noncontrast-enhanced T1 images, the mass is iso- to slightly hypointense to brain matter and enhances intensely with gadolinium administration. The mass is hyperintense on unenhanced T2 images. As the mass actually arises from the internal auditory canal (IAC) and extends into the CPA, some secondary radiographic signs may suggest the diagnosis. These include erosion and flaring of the ipsilateral IAC, an IAC measuring wider than 8 mm, as well as a greater than 2 mm difference between the bilateral IACs. Many schwannomas may also be incidentally found on CT scans, where they are iso- to hypoattenuating with immutably intense intravenous contrast enhancement. However, MRI is so specific that a diagnostic biopsy is rarely performed.

A common imaging dilemma arises from determining whether a CPA mass reflects a schwannoma or a meningioma, both of which can grow along the eigth cranial nerve, and are the two most common diagnoses. A few differentiating points may help. First, as mentioned, a schwannoma is T2 hyperintense in contradistinction to a meningioma, which will be T2 iso- or hypointense. Secondly, in 81% of cases, a vestibular schwannoma will form an acute angle with the petrous bone, while a meningioma will form an obtuse angle. And finally, a classic dural tail, which may be found with a meningioma, will invariably be absent with a schwannoma.

While most of these neoplasms arise spontaneously, anywhere from 5% to 20% of patients will have an underlying disorder, such as neurofibromatosis type 2, predisposing them to the neoplasm. This should especially be considered if multiple masses are present or if there is a young age of presentation. Treatment options include surgical removal, fractionated stereotactic radiosurgery, or monitoring. There is a less than 5% recurrence rate.
Pubblicato da David Spizzichino a 16:00