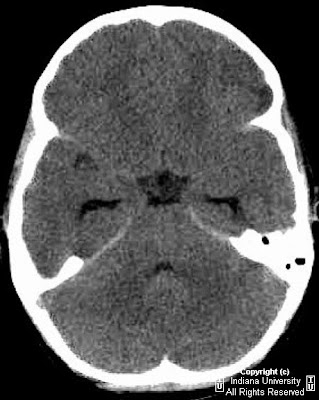 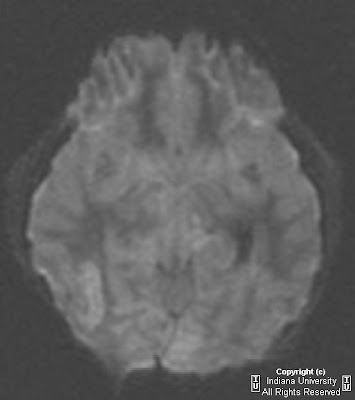 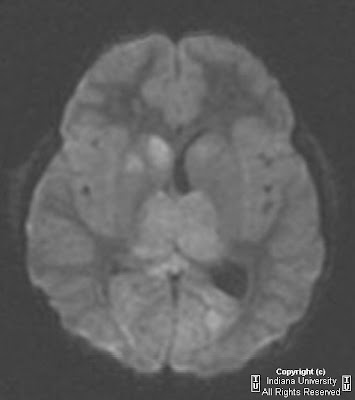 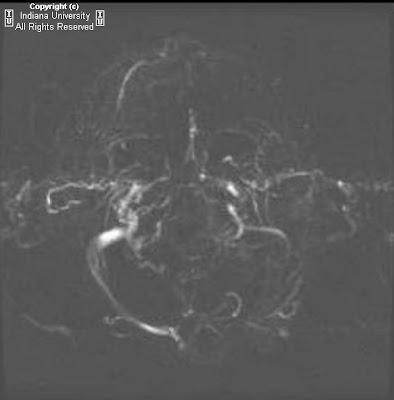 Additional clinical information: Further investigation revealed that the patient had been bitten by a bat while playing in her neighborhood approximately 3 months prior to admission.

Fluorescent antibody and PCR were tested, which were positive for rabies. The child did not recover. Post mortem evaluation was consistent with rabies encephalitis.

Rabies is caused by a RNA virus in the rhabdovirus family. The diagnosis of rabies encephalitis is clinical. Presenting symptoms may be non specific, but there is a typical presenting history of recent bat or other wild animal bit. The incubation period is between one and three months. According to the CDC, there have been only 6 documented cases of human survival from clinically evident rabies. Imaging is usually not performed because of the fatal and fulminate course

On imaging, the encephalitis form of human rabies demonstrates involvement of the brainstem, hippocampi, thalami, basal ganglia, and white matter. There is variable enhancement, and there is frequently restricted diffusion and diffuse cerebral edema. Intracranial arterial narrowing has been described in case reports.

Patients with carbon monoxide poisoning classically presents with abnormalities of the globus pallidi, with hypodensity on CT and hyper intensity of T2 weighted imaging. There is usually associated immediate neurological deficits, which persists over time.

Diffusely infiltrating astrocytoma is usually unilateral and do not demonstrate restricted diffusion. There is variable enhancement.
Pubblicato da David Spizzichino a 16:00