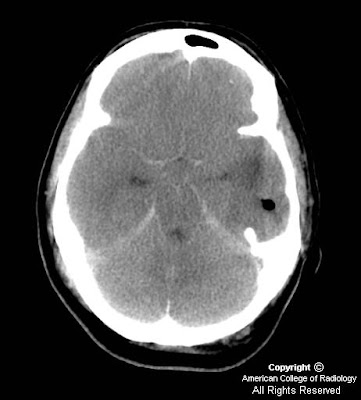 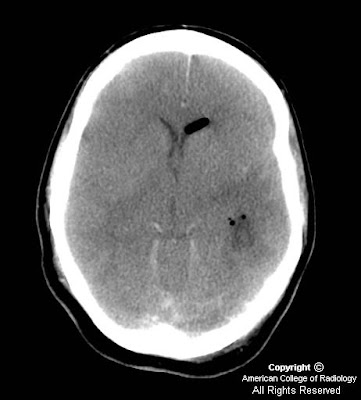 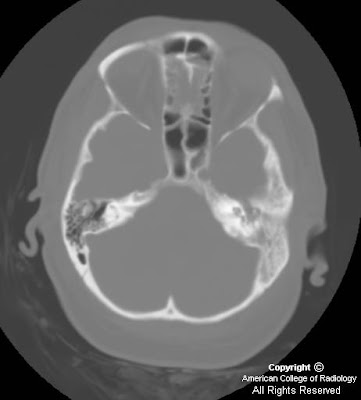 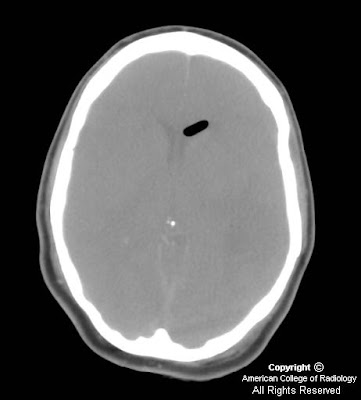 Figure 1: Soft tissue windows demonstrate generalized cerebral edema with loss of grey-white differentiation and near total obliteration of the CSF spaces. An ill-defined hypodense gas containing region is present within the left temporal lobe consistent with abscess formation. The subarachnoid spaces are hyperdense especially in the suprasellar region representing pseudosubarchnoid hemorrhage associated with cerebral edema and/or pyogenic leptomeningitis, not true hemorrhage.
Figure 2: Nondependently layering air is present within the anterior horn of the left lateral ventricle indicating communication between the left temporal lobe abscess and the left lateral ventricle and CSF spaces. On soft tissue windows, normal subcutaneous fat is seen confirming that this is intraventricular air, not fat.
Figure 3 and Figure 4: Bone windows demonstrate total opacification of the middle ear cavity and mastoid air cells consistent with otitis media and mastoiditis. There is subtle bony sclerosis and remodeling which along with the patient’s history is consistent with chronic otitis media with mastoiditis. Also note that there is no evidence of fracture to suggest penetrating trauma as an etiology for these findings. Bone window confirms the presence of air, not fat, in the frontal horn of the right lateral ventricle.

Radiologic evaluation of a patient suspected of having intracranial complications related to active chronic otitis media is crucial to diagnosis and management. Axial CT with contrast is the usual modality of choice preferably with thin cuts, which can demonstrate the presence or absence of an abscess as well as details regarding its size and location. An intraparenchymal mass may show parenchymal low density with mass effect with or without an enhancing capsule. CT may be limited in the setting of acute infections. MRI may improve diagnostic accuracy, with increased sensitivity and specificity.

Etiologic agents usually include anaerobes, Proteus mirabilis, Pseudomonas aeruginosa, Streptococcus, and Staphylococcus. Anaerobic and gram negative bacteria appear to be the most common causes. Consequently, in addition to surgical management, initial treatment should include broad spectrum antibiotics with good cerebrospinal fluid penetration as well as anaerobic coverage. A team approach including an otolaryngologist, radiologist, anesthesiologist, and an infectious disease specialist among others is recommended for optimal outcome.

A pseudosubarachnoid hemorrhage sign is an unusual neuroradiologic finding which may be present in cases of diffuse cerebral edema and/or pyogenic leptomeningitis. In addition to increased attenuation of the otherwise normal subarachnoid spaces, the falx and tentorium can also appear dense. The etiology of this presentation is unknown. Current theories include: 1) blood-brain-barrier breakdown from microorganism toxins in pyogenic meningitis allowing leakage of dense proteinaceous material into the subarachnoid spaces; 2) cerebral edema causes displacement of CSF from the subarachnoid spaces with engorgement of the superficial pial structures creating a predominantly vascular space with relatively dense intravascular blood. Since management of the causes of subarachnoid and pseudosubarachnoid hemorrhage is quite different, it is important to be able to recognize this relatively rare sentinel neuroradiologic sign.
Pubblicato da David Spizzichino a 16:00