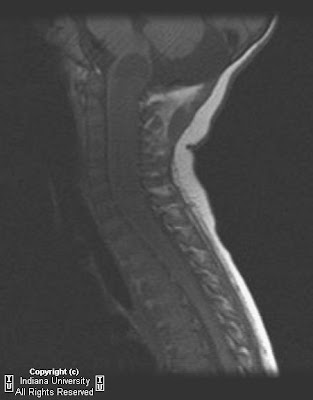 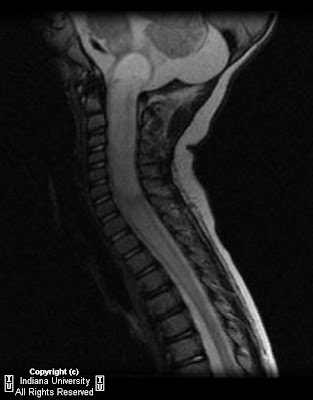 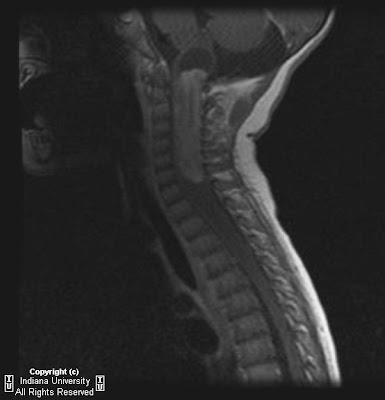 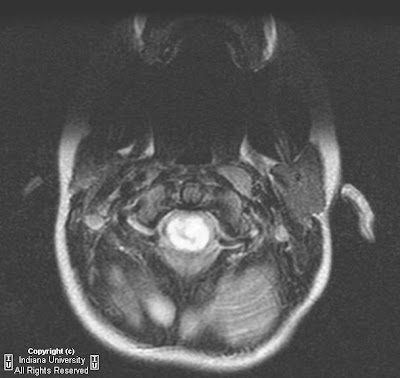 There is an intramedullary, heterogeneously enhancing mass expanding the spinal cord from the level of C2 to C7-T1. The mass has iso to hypo intense T1 signal with areas of hyper intense T2 signal. There is an associated cystic portion of edema up to the pons in the brainstem (as shown on initial axial image). There is increased T2 signal within the spinal cord that extends inferiorly from the mass to the level of T7.

Primary spinal cord tumors account for 2 to 4 percent of all primary CNS tumors. One-third are located in the intramedullary compartment and are gliomas.
Astrocytomas are second in prevalence to ependymomas in adults; however, they are the most common intramedullary tumor in children.
Most common site of involvement is the thoracic cord followed by the cervical cord.
Can involve the entire spinal cord in children, but quite rare in adults.
Isolated conus medullaris involvement is seen in about 3% of cases. Rarely in the filum terminale.
Pilocytic astrocytomas are a subset of astrocytomas that are low-grade and well-circumscribed with intense enhancement on MR imaging.
Usually are iso- to hypo intense relative to the spinal cord on T1-weighted images and hyper intense on T2-weighted images.
Average length of involvement is seven vertebral segments.
Cysts are a common feature.
Usually eccentric because they arise from parenchyma and not central canal.
Pubblicato da David Spizzichino a 16:00