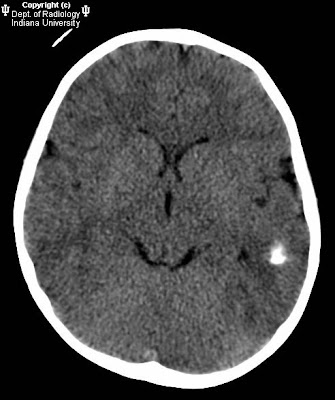 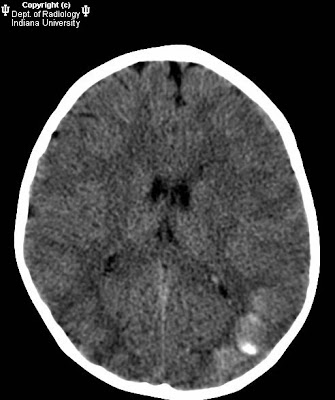 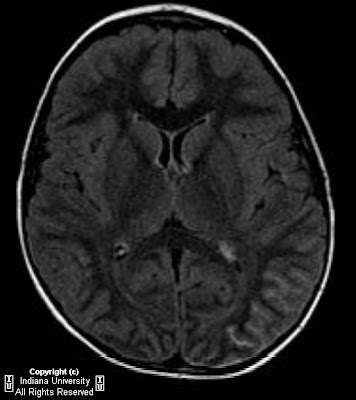 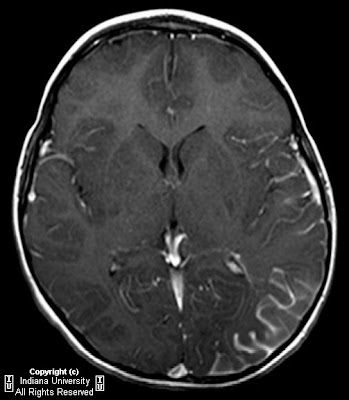 Hyper density on CT in the left tempero-occipital region which may represent calcium and/or hemorrhage, possibly parenchymal and in the subarachnoid space. Non contrast MRI demonstrates FLAIR hyper intensity in the left tempero-occipital region involving cortex and subarachnoid space. Absent mass effect and vasogenic edema. On contrast enhanced MRI, there is enhancement within sulci in this region and mild asymmetric enlargement of the left choroid plexus.

Sturge-Weber syndrome is sporadic disease known descriptively as encephalotrigeminal angiomatosis. The causative etiology is unknown, but the disease is characterized by angiomata in the distribution of the fifth cranial nerve and in the leptomeninges, most commonly in the parietal and occipital lobes. This focal abnormal development of venous drainage results in vascular congestion, ischemia, atrophy and eventually calcification. "Port-wine" vascular nevus flammeus in the trigeminal nerve distribution (most commonly in V1) is a commonly encountered cutaneous finding. Patients frequently present with seizure in the first year of life. These are usually focal and involve the side of the body contralateral to the nevus. Focal cerebral ischemia may result in dystrophic calcification, seizure (80%), mental retardation (>50%), hemianopsia, and hemiplegia. About one third of patients will have ocular involvement, with buphthalmos and glaucoma.

Calcification may be seen on plain film of the skull, and on the CT scanogram. Significant calcium deposition before the age of 2 is uncommon. Tram-tracking is the characteristic finding, resulting from calcification of apposing gyri surrounding a dilated sulcus. CT demonstrates gyriform, curvilinear calcification, most prominent in the parietal and occipital lobes ipsilateral to the facial nevus. Secondary changes in the skull are sometimes present, such as enlargement of the paranasal sinuses and mastoid air cells. Strong post-contrast enhancement may be seen in both the angiomata, as well as the ipsilateral choroid plexus. Prominent collateral drainage through subependymal and medullary veins may be seen, particularly with angiography or MR venography.
Pubblicato da David Spizzichino a 16:00