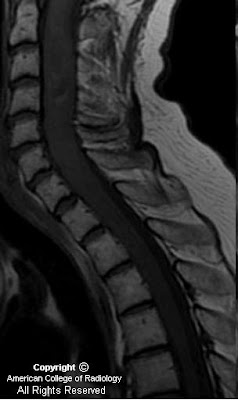 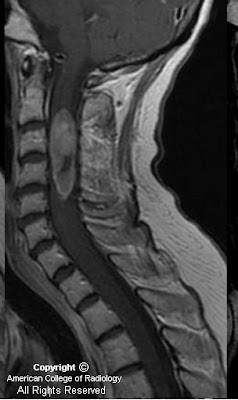 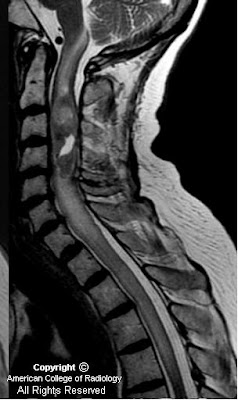 The T1-WI shows an intramedullary lesion (Figure 1), with heterogeneous enhancing in the post-contrast sequence (Figure 2). In the T2-WI the lesion appears as heterogeneously hyperintense. The lesion is surrounded by edema.


Intramedullary spinal cord metastases are rare, estimated at only 0.9-2.1% of all cancer patients at autopsy. However, only 0.1 – 0.4% of all cancer patients have clinically significant intramedullary metastatic disease. Lung metastases are most common, followed by breast cancer, renal cell carcinoma, melanoma and lymphoma. Ovarian carcinoma metastatic to the spinal cord is extremely rare with only a handful of cases reported in the literature.

Lesions are usually single (75%), two lesions found in 20% of cases and multiple in 5%. However, the majority of patients will have systemic metastases at the time of diagnosis. The cervical cord is most commonly involved; however, there can be involvement of all portions of the cord.

Pathogenesis is poorly understood. The most accepted route is hematogenous spread, both arterial and through Batson’s venous plexus. Other proposed mechanisms include meningeal carcinomatosis with infiltration of cells into the cord and direct invasion from contiguous structures.

Treatment is generally palliative and may consist of radiation, steroids and chemotherapy. Microsurgical resection has been attempted in select cases. Prognosis is uniformly poor with only 10% of patients living longer than 6 months after presentation.
Pubblicato da David Spizzichino a 16:00