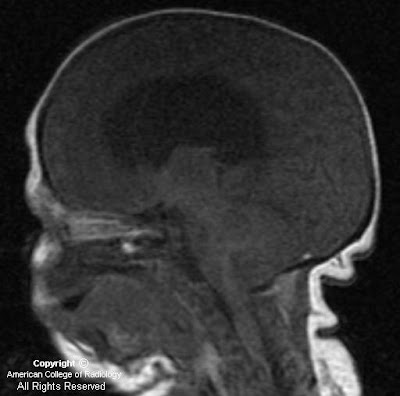 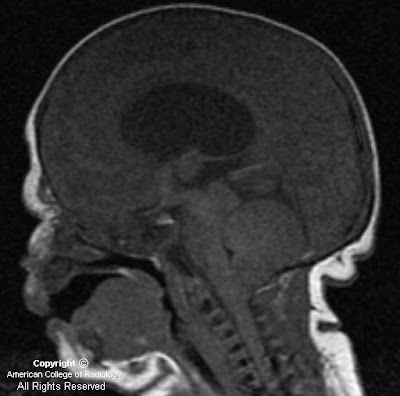 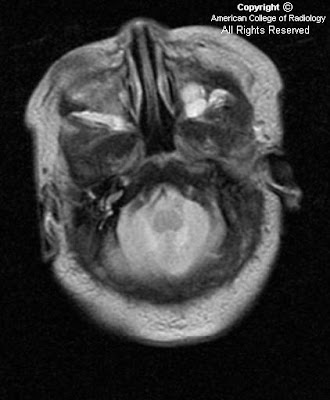 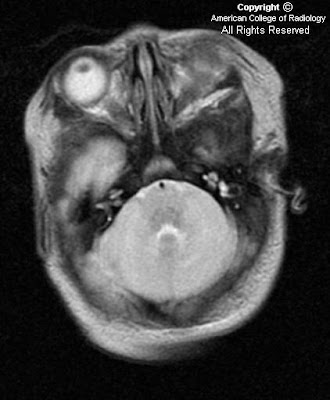 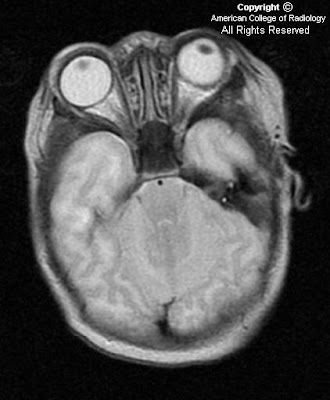 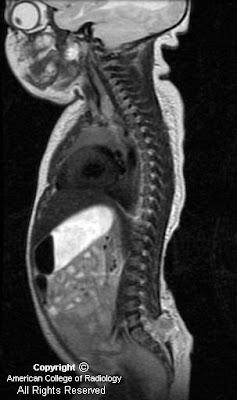 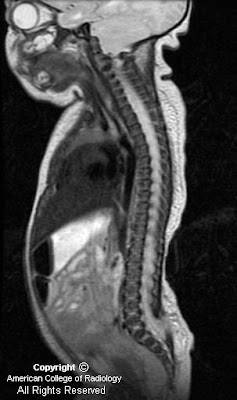 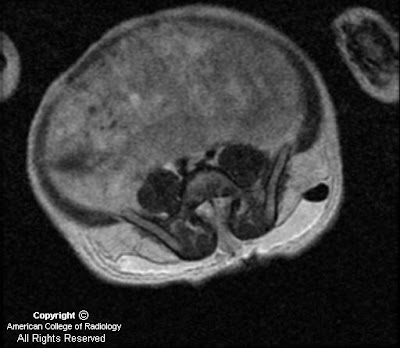 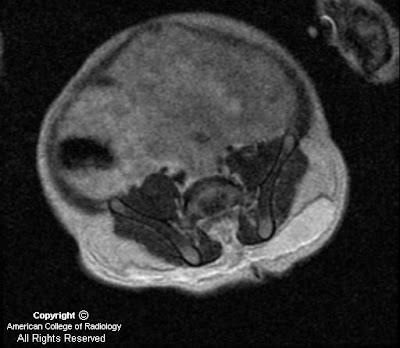 T1-weighted sagittal images (Figure 1 and Figure 2) and T2-weighted axial images (Figure 3, Figure 4, and Figure 5) of the brain demonstrate a small posterior fossa with herniation of the cerebellar tonsils through the foramen magnum and a beaked appearance of the tectum. There is associated hydrocephalus.

T2-weighted sagittal (Figure 6 and Figure 7) and axial (Figure 8 and Figure 9) images of the spine demonstrate a myelomeningocele at the level of the lower lumbar spine.


The Chiari II malformation is a complex anomaly with skull, dural, brain, spinal and spinal cord manifestations. It is regarded as a disease of primary neurulation and is almost invariably associated with a myelomeningocele. There are multiple associated findings, to include; protrusion of the cerebellar tonsils through the foramen magnum, extension of the cerebellar hemispheres and vermis above the incisura of the tentorium, beaked appearance of the tectum, fenestration of the falx, hydrocephalus, a prominent massa intermedia, colpocephaly, and dysgensis of the corpus callosum.

The Chiari II malformation is the most common serious malformation of the posterior fossa, with a frequency of approximately 1 case per 1000 population. Hindbrain dysfunction is the major cause of mortality. The mortality rate is 15% in the first few years of life and is reported to be as high as 50% for the long term rate, regardless of the treatment strategy.

MRI is currently the best diagnostic method for detecting the full constellation of findings associated with Chiari II malformations. CT scans are commonly performed to assess for hydrocephalus as well as to follow up infants who have undergone a ventriculoperitoneal shunt procedure. Many of the typical findings described by using cranial CT scans and MRIs also can be demonstrated on cranial sonograms. Ultrasound has the benefit of not using ionizing radiation, however it is heavily operator dependent and some of the associated abnormalities may be missed.
Pubblicato da David Spizzichino a 16:00