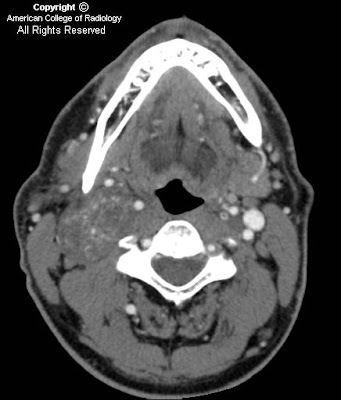 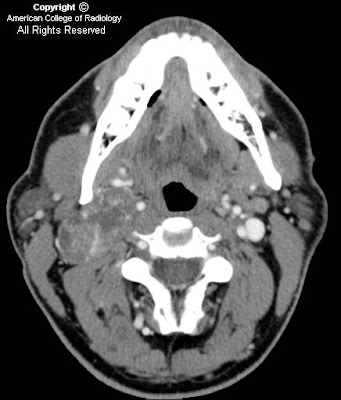 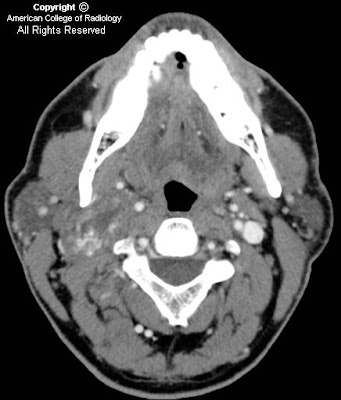 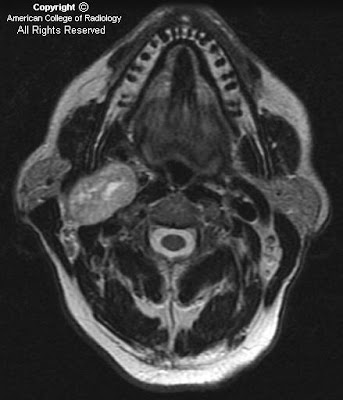 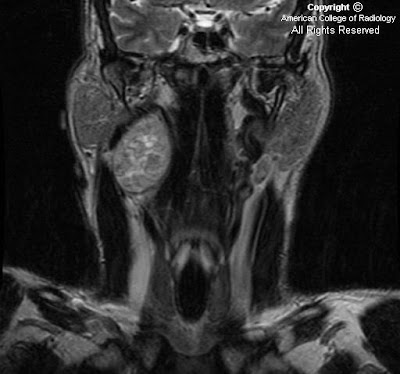 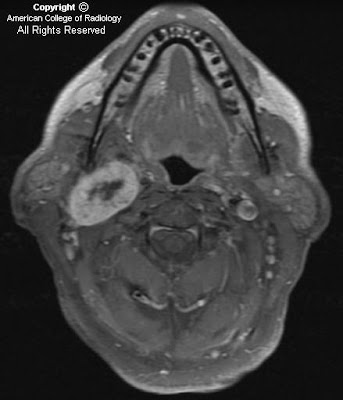 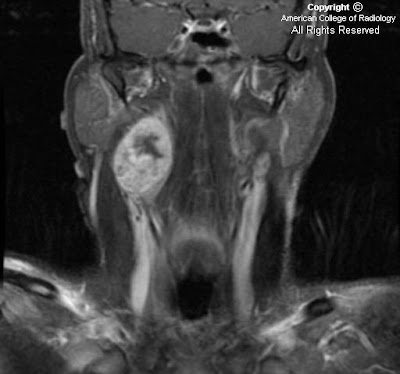 Figure 1, Figure 2, and Figure 3: Contrast enhanced axial CT images through the neck demonstrate a 4.5 X 6 cm circumscribed and moderately enhancing mass within the right carotid space with scattered areas of low density centrally within the mass. The internal and external carotid arteries as well as the parapharyngeal fat are displaced anteriorly. The parotid gland is separate from the lesion.
Axial and coronal T2 weighted images (Figure 4 and Figure 5) and axial and coronal T1 weighted post-gadolinium fat saturated images (Figure 6 and Figure 7) again show a well defined mass with heterogeneous T2 signal and areas of cystic degeneration. There is peripheral enhancement following gadolinium administration. Note that the mass is not contiguous with the parotid gland.


Schwannomas are benign neoplasms which arise from the nerve sheath and consist of schwann cells in a collagenous matrix. Histologically, the terms Antoni type A and Antoni type B are used to describe varying growth patterns. Type A tissue has elongated spindle cells and is compact in nature while type B has a looser organization with cystic spaces intermixed within the tissue. These cystic spaces result in high signal intensity on T2 weighted MR sequences.

Vestibular schwannomas are the most common cranial nerve (CN) schwannoma, followed by trigeminal and facial and then glossopharyngeal and vagus schwannomas. CN schwannomas are usually isolated lesions, except when they are associated with neurofibromatosis type 2 (NF2). NF2 is characterized by bilateral acoustic schwannomas but other CN schwannomas also occur at an increased frequency in these patients.

The majority of carotid space masses are benign, with the two most common lesions being the vagus schwannoma and the glomus tumor. Neoplasms of the vagus nerve include paragangliomas (50%), schwannomas (31%), neurofibromas (14%), and neurofibrosarcomas (6%). Most cases of schwannomas manifest between the third and sixth decades of life as a firm and painless mass in the neck.

Schwannomas of the vagus nerve are usually well-defined, rounded structures which are hypodense to muscle on CT and enhance moderately. On MR, there is variable T2 signal intensity depending on its content of Antoni A and Antoni B tissue. Hemorrhage and cystic degeneration are not uncommon. They result in anterior displacement of the carotids. In contrast, glomus tumors are highly vascular and demonstrate dramatic enhancement. Flow voids are usually visualized, resulting in the characteristic salt-and-pepper appearance. Carotid body tumors tend to splay the internal and external carotid arteries away from each other, while glomus vagale tumors displace the carotid artery anteriorly. The distinction between a vagus schwannoma and the glomus vagale tumor has to be made on the basis of flow voids and vascular flow curves. Also, glomus vagale tumors are relatively uncommon.
Pubblicato da David Spizzichino a 16:00