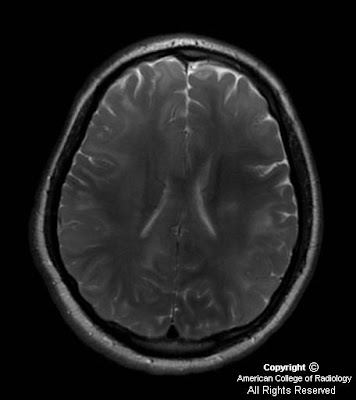 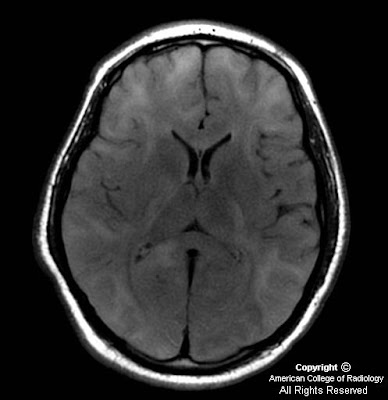 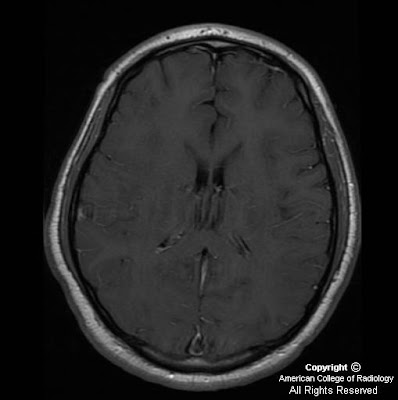 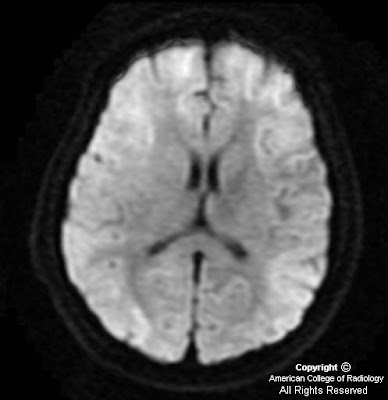 History: 18-year-old male with 3 months of personality change, gradual decrease in responsiveness, rigidity and abnormal EEG findings (the patient is HIV negative and does not report a recent viral or respiratory infection or vaccination).


SSPE is a chronic progressive encephalitis that can very rarely occur in people 2-10 years following infection with the measles virus. Early stages are characterized by personality, behavioral and intellectual changes. There is then further neuropsychiatric deterioration progressing to ataxia, chorea, dystonic rigidity, seizures, myoclonus, optic atrophy and cortical blindness. The terminal stages include unresponsiveness, autonomic dysfunction, coma and death within 1 to 3 years of the onset of symptoms.

The white matter is predominantly affected with patchy demyelination and initial sparing of the subcortical U fibers. In the first stage of the disease, T2WI/FLAIR typically demonstrates asymmetrical gray and adjacent subcortical white matter hyperintensity in the parieto-occipital regions. Enhancement and mass effect may occur early in the disease. The basal ganglia (particularly the putamen), cerebellum, pons and frontal white matter may also be involved. In the second stage of the disease, cortical/subcortical lesions regress and T2WI/FLAIR periventricular hyperintensity develop. In the terminal stage, periventricular white matter disease progresses and profound parenchymal loss occurs.

Treatment is the immunomodulator interferon and antivirals ribavirin and inosine pranobex which, if given early and throughout the patient’s life, may limit progression of disease.
Pubblicato da David Spizzichino a 16:00