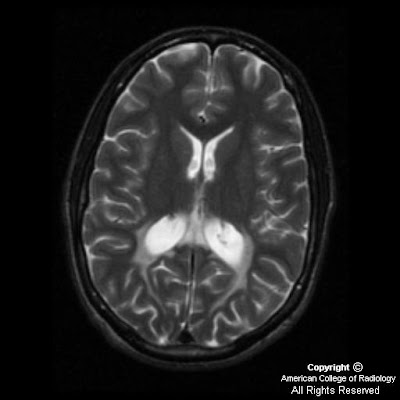 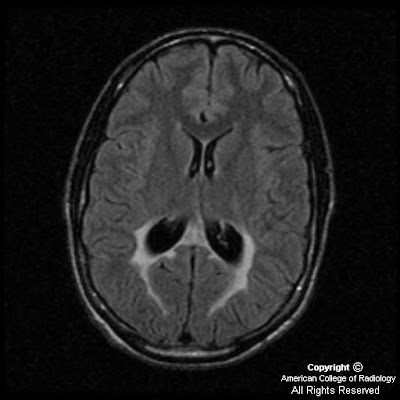 
Adrenoleukodystrophy is an x-linked inherited disease involving the central nervous system and adrenal cortex. It results from an inability of peroxisomes to oxidize fatty acids. While seen most commonly in young males, it is also known to present in female heterozygotes. In adults, patients present with varying degrees of cognitive impairment, peripheral neuropathy, bladder and sexual dysfunction.

On imaging, "classic" adrenoleukodystrophy will demonstrate bilateral confluent hyperintense areas in the parietoccipital deep white matter on T2WI and FLAIR. If contrast is administered, it is common to see peripheral linear areas of enhancement with a “leading edge”. In AMN, T2 hyperintensity is also common in the spinal tract fibers of the pons, cerebral peduncles, and internal capsule.

Adult onset adrenoleukodystrophy has been broken down into four main subgroups. The first group is referred to as Pure AMN and is the most common subtype. Patients in this group present with thoracic spinal cord atrophy without any focal lesions and a normal brain MR. Clinically they present with spastic paraparesis and bladder dysfunction. The second group is referred to as AMN Type 1, in which MR will demonstrate T2 hyperintensity along the long tracts of the brain, such as the corticospinal, spinothalamic, and auditory pathways. AMN Type 2 demonstrates extension beyond the long tracts and crosses the corpus collosum. These patients deteriorate much more rapidly and this form most accurately fits this case presentation. The fourth type, Adult Cerebral ALD, results in severe lobar white matter involvement with marked cerebral atrophy.

It is important to consider adult onset ALD/AMN in the differential diagnosis of all adult demyelinating disorders, since it is commonly thought of as a pediatric diagnosis and patients are frequently misdiagnosed with multiple sclerosis or ALS. Early recognition can affect prognosis and delay rapidly progressive neurological deterioration.

Confirmation of the diagnosis can be obtained by various laboratory examinations. Patients will demonstrate elevated concentrations of plasma VLCF. Adrenal function testing will show diminished levels of ACTH. Genetic testing can clinch the diagnosis with a mutation of the ABCD1 locus. Treatment subsequently consists of dietary restriction, Lorenzo’s oil, and statins.
Pubblicato da David Spizzichino a 16:00