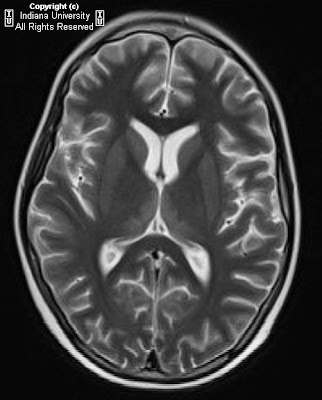 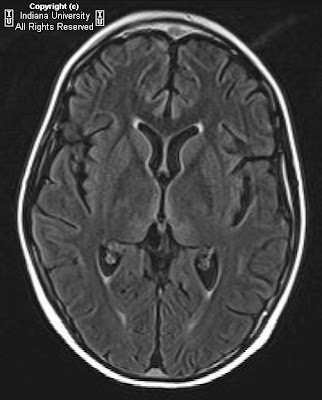 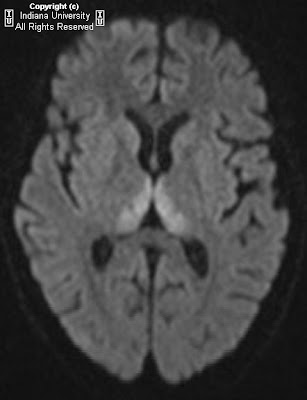 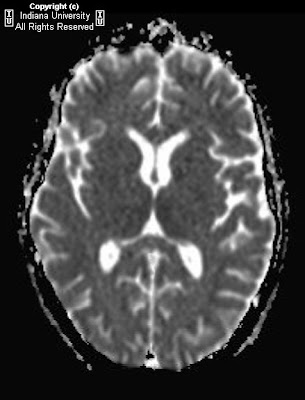 There is increased T2 signal and diffusion restriction in the thalami bilaterally. There is no contrast enhancement.

Wernicke's encephalopathy occurs with vitamin B1 (thiamine) deficiency. It is associated with malnutrition and is commonly seen in alcoholics. Wernicke's encephalopathy manifests itself as memory loss, ataxia and oculomotor dysfunction. Thiamine plays a vital role as a cofactor for several enzymes involved in carbohydrate metabolism. Without thiamine, the energy requirements of neuronal cells are not met resulting in cell death and neurologic dysfunction.

Wernicke's encephalopathy is reversible and if suspected, treatment should begin promptly. Parenteral thiamine should be administered promptly. The thiamine should be given prior to any glucose infusion. The addition of glucose in a thiamine deficient patient will exacerbate the encephalopathy. Patient's with thiamine deficiency are also likely to be hypomagnesemic and parenteral magnesium sulfate should also be administered.

Wernicke's encephalopathy manifests itself as increased T2 signal in the medial thalami, hypothalamus and periaqueductal grey matter. There is associated diffusion restriction in affected areas. In chronic cases, there is atrophy of the mamillary bodies. The sensitivity of MR to diagnose Wernicke's is estimated at approximately 50% so the lack of these imaging findings, do not exclude the diagnosis of Wernicke's encephalopathy. CT is even worse than MR in the diagnosis of Wernicke's and should be used to rule out an acute intracranial process. Alcoholic induced Wernicke's will manifest the same above findings, but will also show superior vermian atrophy.

In this case, there is increased T2 signal and diffusion restriction in the medial thalami bilaterally. There is no contrast enhancement. The patient has lymphoma and a chronic history of vomiting. With this history, Wernicke's encephalopathy was thought to be the cause of the patient's altered mental status. The lack of contrast enhancement makes the diagnosis of lymphoma highly unlikely.
Pubblicato da David Spizzichino a 16:00