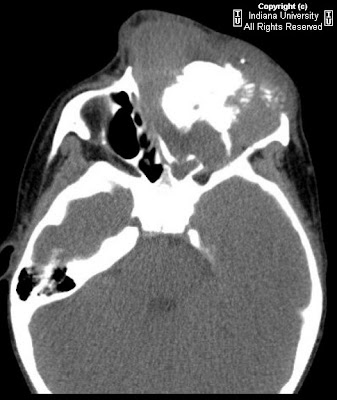 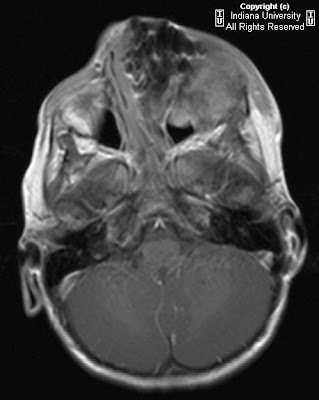 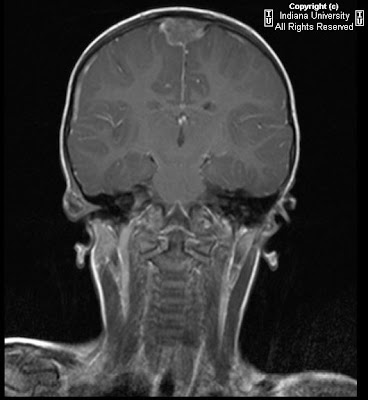 Large mass involving left side of face with invasion, mass effect, and extensive bony involvement. The mass does not appear to cross the midline. Enhancing focus on MR adjacent to the superior aspect of the falx and superior sagittal sinus. FDG-avid spine lesions.

MNTI is a rare osteolytic, pigmented neoplasm that typically affects the head and neck, predominantly the maxilla, of infants. It is typically considered a benign lesion, with only a few reported cases of metastatic disease reported in the literature. It usually presents in the first year of life. It may appear as a rapidly expanding, non-ulcerated, lightly pigmented, blue or black lesion on the anterior aspect of the maxilla. It may extend intraorally, cause bone destruction and dislodgement of teeth.

MNTI is considered to be of neural crest origin, and some patients will high urinary excretion of vanillylmandelic acid (VMA). The tumor is typically non-encapsulated, showing local invasion of bone. The histologic appearance is similar to other cells of neural crest origin, demonstrating small, round blue cells, as well as containing a moderately vascular fibrous background. Part of the lesion may contain large polygonal cells arranged in sheets that contain melanin. Immunohistochemistry and electron microscopy can aid in the final diagnosis. The few reported cases of malignant disease have noted increased numbers of mitoses per high-powered field.

Conventional radiography may demonstrate a well-circumscribed or ill-defined radiolucency, with destruction of bone as the lesion progresses. CT can delineate the extent of soft tissue involvement and osteolysis. Contrast-enhanced MRI can demonstrate soft tissue tumors with nonenhancing, heterogeneous tissue density and can also demonstrate osseous involvement. There may be foci of T1-hyper/T2-hypointensity secondary to melanin.

Surgical excision with partial maxillectomy and 5 mm margins are typically curative, with 10-15% recurrence rates. There are no standards of care for malignant disease.

Initial biopsy of this patient's facial lesion demonstrated a high mitotic index. After 2 surgical excisions and recurrence, the patient developed intracranial and spinal column metastases. The patient underwent multiple cycles of radiotherapy and chemotherapy. The intracranial lesion was never biopsied due to the precarious location, however it has regressed, and there appears to be a slight interval decrease in size of the soft tissue component of the maxillary lesion.
Pubblicato da David Spizzichino a 16:00