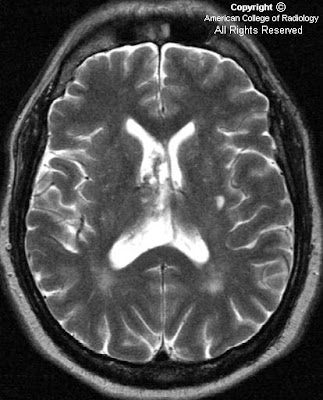 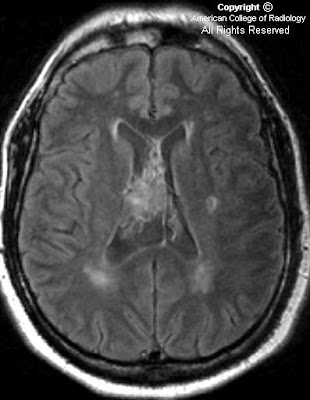 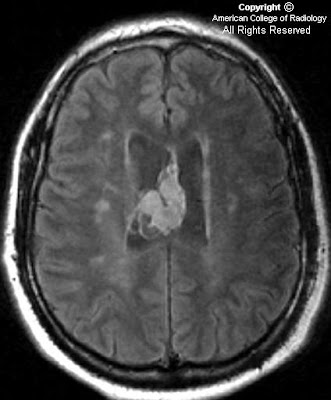 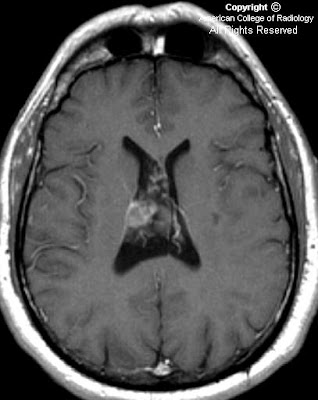 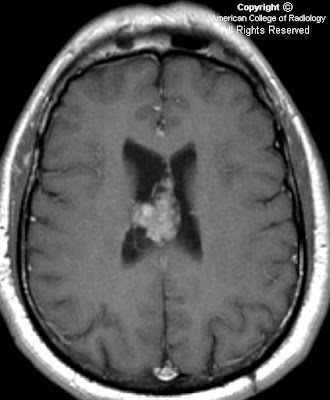 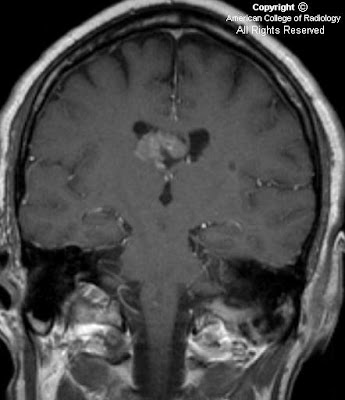 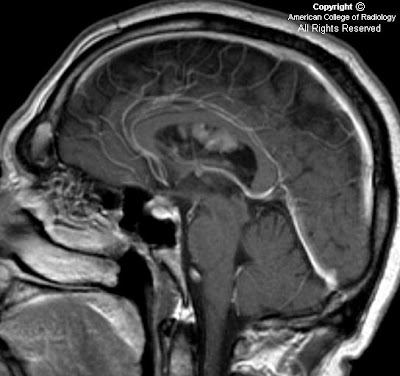 
Although central neurocytomas account for less than 1% of all intracranial neoplasms, they constitute approximately 50% of intraventricular tumors in patients 20-40 years old. Most present with headache, signs and symptoms of increased intracranial pressure, seizure, or change in mental status. In rare cases tumors with neurocytoma features may involve the brain parenchyma or spinal cord and are referred to as extraventricular central neurocytomas. These have a worse prognosis.

There is controversy regarding whether the embryological origin of central neurocytomas arises from neuronal or bipotential progenitor cells. They have a more benign appearance with uniform round cells with neuronal differentiation. Anaplastic features and necrosis is rare. Histologically, central neurocytomas are difficult to distinguish from oliogodendrogliomas, and immunohistochemical staining for synaptophysin and neuron specific enolase (positive in neurocytoma) is used to differentiate the two. They are considered as WHO grade II astrocytomas.

CT demonstrates a mixed solid and cystic lesion within the lateral ventricle with moderate, heterogeneous enhancement. Most lesions occur in the body or frontal horns of the lateral ventricle or near the foramen of Monro. This can result in obstructive hydrocephalus. Calcification occurs in 50-70% of cases. On MR the lesion is heterogeneous with the majority of the lesions being isointense to gray matter on T1 and the cystic regions being hypointense on T1 and hyperintense on T2. Prominent flow voids can also be seen. On FLAIR sequences the mass is heterogeneous and predominantly hyperintense. Contrast enhanced MR is the preferred imaging modality in these cases. MR spectroscopy demonstrates a large choline peak. Central neurocytomas typically demonstrate decreased activity on PET imaging.

Most central neurocytomas are treated with complete surgical resection, which is usually curative. These tumors are typically benign and rarely invade brain parenchyma or develop local recurrence. In cases of local recurrence or incomplete resection radiation therapy, chemotherapy, and/or radiosurgery can be employed as adjunct treatments. Overall the 5 year survival rate is over 80%.
Pubblicato da David Spizzichino a 16:00