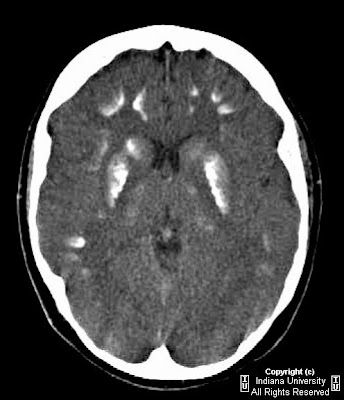 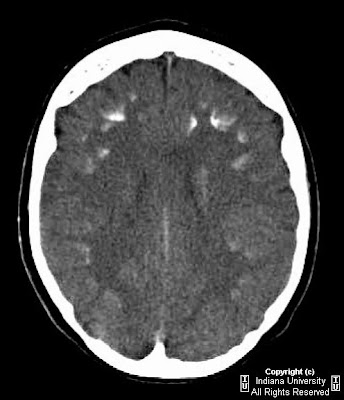 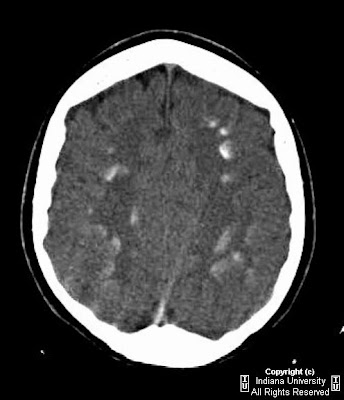 Additional clinical data: The patient has a history of hypocalcemia.

Pseudohypoparathyroidism (PHP) is a congenital hereditary abnormality that appears to be transmitted as an X-linked dominant trait characterized by hypocalcemia, hyperphosphatemia, and basal ganglia / soft tissue calcification. In PHP, biochemical hypoparathyroidism results from end-organ resistance to parathyroid hormone, due to a defect in the receptor-adenylate cyclase system. As a result, the kidney and, less commonly, the bones are unable to respond to parathyroid hormone.

Afflicted patients may be short-statured with rounded faces. Brain calcinosis may be seen in conditions with PHP, the severity and distribution of which varies in individual reports. Bilateral calcifications may present in the basal ganglia, thalamus, cerebral white matter, and cerebellum on head CT. The intracranial calcifications of the basal ganglia may later coalesce into homogeneous masses. Osteosclerosis, which may be generalized or localized, is the most common skeletal abnormality, including calvarial thickening. Subcutaneous calcifications can be seen, especially in the area of the hips and shoulders.
Pubblicato da David Spizzichino a 16:00