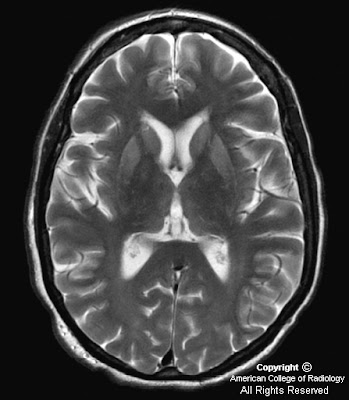 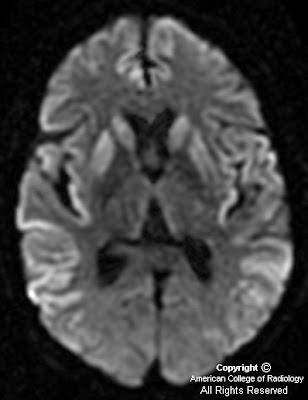 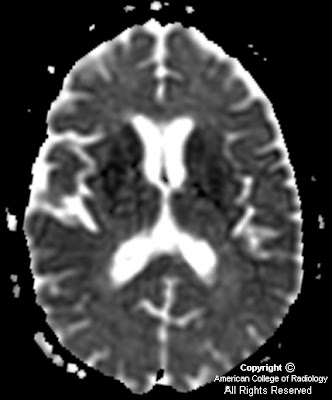 Figure 1, Figure 2, and Figure 3: T2, DWI, and ADC map show increased signal and restricted diffusion in the basal ganglia. More specifically there is symmetrically increased signal in the caudate and putamen with sparing of the globus pallidus. Additional areas of increased signal are seen in the right and left parietal cortex (Figure 4). No contrast enhancement was seen.


CJD is a progressive fatal neurodegenerative disorder caused by prion proteins accumulating within the neurons.

The familial or genetic form (fCJD) is seen in 15% of cases. These cases are identified by DNA analysis of the PRPC gene mutations.

Though it receives the most media attention, the infectious variant or iatrogenic form (vCJD) is the rarest, accounting for 1% of cases.

Diagnosis is based on clinical presentation, EEG findings, and a positive CSF analysis showing 14-3-3 proteins. MRI is reported to have high sensitivity and specificity for the disease with characteristic symmetric signal abnormalities in the basal ganglia and cortical abnormalities. The caudate and putamen are the most frequently involved nuclei. Thalamic involvement is only seen in 14% of patients with the sporadic form. However, thalamic involvement is seen in 78-100% of the variant/iatrogenic forms of CJD. The globus pallidus is usually spared. Diffusion weighted sequences are the most sensitive. Abnormalities are also well seen on T2 and FLAIR weighted sequences. The basal ganglia and cortical lesions show increased signal on T2 and FLAIR with persistent restricted diffusion. The cause of the restricted diffusion is not completely understood.

No treatment is available for the disorder at this time. The clinical course is usually progressive and rapid with most patients expiring within six months to one year from the time of diagnosis.
Pubblicato da David Spizzichino a 16:00