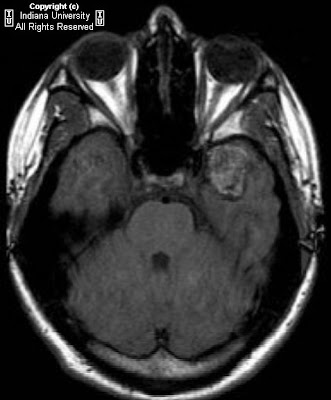 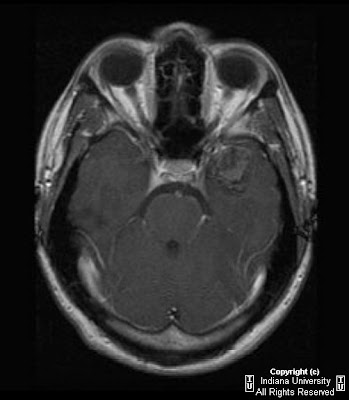 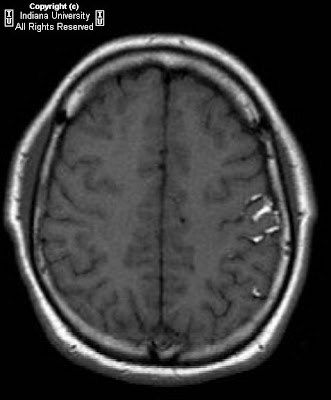 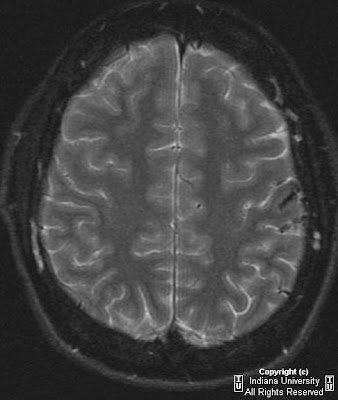 Dermoid cysts are comprised of connective tissue, squamous epithelium, lipid, and glandular tissue. They sometimes also include calcifications.
Congenital lesions, which are usually midline. Most commonly in the posterior fossa or suprasellar region. Can be seen in the spine, often involving the conus medullaris and cauda equina.
Benign and slow-growing due to glandular secretions and accumulation of epithelial debris. Symptoms are secondary to mass effect.
Dermoid cysts can rupture and release lipid contents into the subarachnoid spaces, which can cause chemical meningitis. Most common symptom postrupture is headache. Meningeal inflammation can (but rarely does) lead to arterial vasospasm and stroke or death.
No role for chemotherapy or radiation therapy in treating dermoid cysts. Resection must include the contents and entire connective tissue lining. Special care must be taken not to spill contents or meningitis will ensue.
On CT, hypodensity suggesting significant fat composition suggests the diagnosis.
On MR, a heterogeneous often midline mass showing hyperintense regions on T1-weighted images may represent a dermoid cyst. Diffuse subarachnoid or intraventricular foci of hyperintensity on T1-weighted imaging that lose signal on fat-suppressed images are concerning for rupture and subsequent chemical meningitis.
Pubblicato da David Spizzichino a 16:00