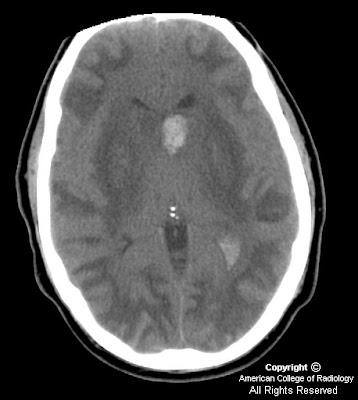 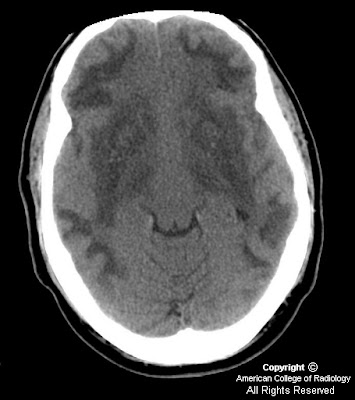 Figure 1: Unenhanced CT of the head demonstrates acute hemorrhage within the left caudate nucleus as well as layering in the left lateral ventricle.
Figure 2: There is diffuse edema with effacement of the sulci, white matter lucency, and punctate hemorrhage of the putamina.


Methanol is commonly found in household products such as windshield wiper fluid, paint remover, and antifreeze. It is an uncommon but potentially fatal cause of toxicity, and a high clinical suspicion must exist. Symptoms of visual disturbance (blurriness, blindness), headache, nausea, dizziness and confusion may present 12 to 24 hours after consumption. The symptomatic delay is due to the time it takes the liver to metabolize methanol. The gastrointestinal tract rapidly absorbs methanol. It is converted by alcohol dehydrogenase to formaldehyde. The formaldehyde is then converted to the toxic metabolite formic acid by aldehyde dehydrogenase. Formic acid and the resulting metabolic acidosis are thought to contribute to the intracranial findings of cerebral edema, putaminal necrosis, and potential basal ganglia hemorrhage. The basal ganglia have a high metabolic demand and a rich vascular supply, which are thought to be more susceptible to toxic metabolites and hypoxia.

Management and prognosis are based on the resulting metabolic acidosis. Intravenous fomepizole is administered to competitively inhibit alcohol dehydrogenase. This is preferred over the traditional administration of intoxicating intravenous ethanol. Further treatment includes hemodialysis to remove unmetabolized methanol and sodium bicarbonate to treat the metabolic acidosis. Patient prognosis is poor in the setting of basal ganglia hemorrhage. Unfortunately, despite optimal treatment, our patient expired within four days of consuming nearly half-a-gallon of windshield wiper fluid.
Pubblicato da David Spizzichino a 16:00