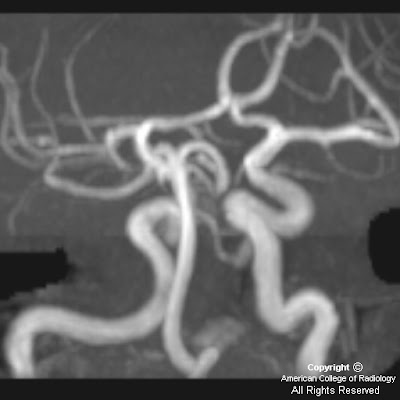 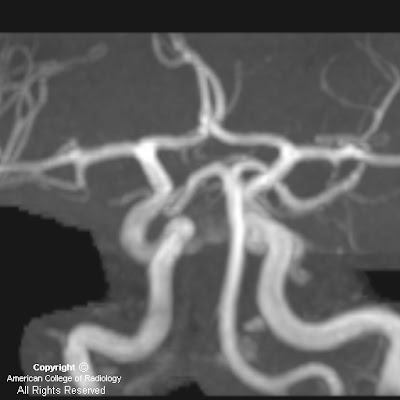 In Figure 1, an artery can be seen branching from the cavernous portion of the left internal carotid artery and joining the basilar artery. Notice the absence of this vessel on the right.


In the 3-5 mm human embryo, approximately 29 days after ovulation, four important arterial anastamoses join the dorsal aorta (the future internal carotid artery) to the bilateral longitudinal neural arteries (the future basilar artery). They are the trigeminal, otic, hypoglossal and proatlantal intersegmental arteries. The largest of these is the trigeminal artery. These arteries persist about a week and regress as the posterior communicating and vertebral arteries develop. For reasons that are not fully understood, these arteries sometimes fail to regress.

The most common persistent carotid-vertebrobasilar anastamotic artery is the trigeminal artery. The incidence has been reported to be about 0.2%, but if undiagnosed and unreported cases are taken into account, this number may approach 1%. There are two main classifications of a persistent trigeminal artery based on its anatomic position; lateral and medial. The lateral type leaves the cavernous sinus to course with the trigeminal root on the lateral side of the sella turcica in a groove of the posterior petrosal process and joins the basilar artery between the origin of the anterior inferior cerebellar artery and superior cerebellar artery. The medial type penetrates the sella turcica to run in its own groove and perforates the dura near the clivus to join the basilar artery.