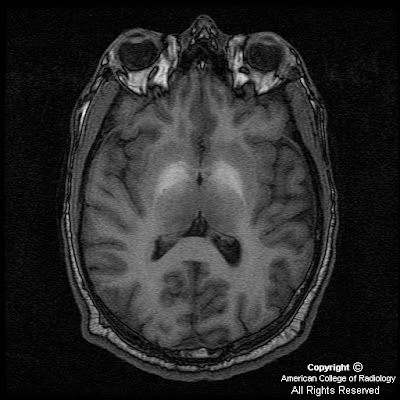 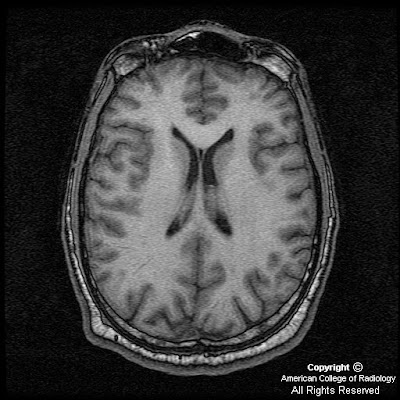 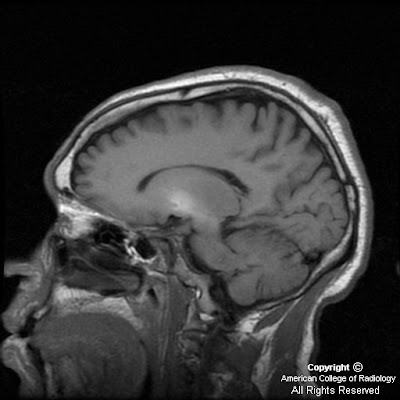 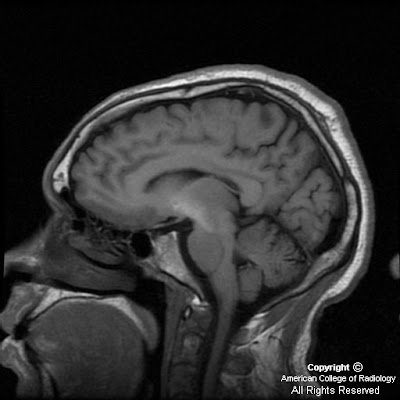 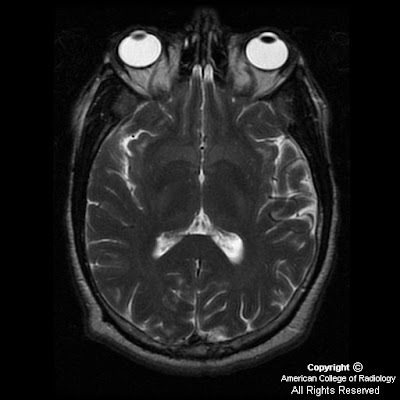 Axial T1 weighted (SPGR) and sagittal FLAIR sequences demonstrate symmetric, increased signal in the basal ganglia, predominantly the globus pallidi bilaterally, (Figure 1 and Figure 3). However, abnormal increased signal extends from the midbrain (Figure 4), up to the head of the caudate (Figure 2). On T2 weighted images, the basal ganglia are unremarkable (Figure 5).


There are several causes of high T1 signal in the basal ganglia.

Obviously, clinical history or other imaging can be helpful in determining the underlying cause, as in this case. Additionally, the T2 characteristics and pattern of signal abnormality in terms of anatomic location and symmetry may suggest a particular etiology.

Hyperintense T1 signal in the basal ganglia, particularly the globus pallidus, has been observed in patients with chronic liver failure for some time. It has been postulated that paramagnetic substances, especially manganese, escapes hepatic clearance due to dysfunction and/or portosystemic shunting resulting in deposition in the basal ganglia. In a small autopsy series by Maeda et al, 3 patients with cirrhosis and T1 hyperintense basal ganglia all had significantly elevated manganese and copper in the globus pallidus and putamen. 1 patient with cirrhosis and no T1 hyperintense basal ganglia had normal levels of these substances. Individuals receiving TPN have identical findings on MRI, primarily from manganese deposition as well. When manganese is administered parenterally, it escapes the normal regulatory mechanisms, as in cirrhotics. In both patients on parenteral nutrition and those with liver failure, the signal abnormality may regress when TPN is stopped or hepatic function is restored

Characteristic MR findings in the basal ganglia in these patients include symmetric hyperintense signal on T1 weighted images, no signal change on T2 sequences, and no enhancement. CT attenuation in the basal ganglia is normal. The globus pallidus is predominantly involved however abnormal signal may extend from the tegmentum of the midbrain to the white matter. There is a direct relationship between the degree of signal abnormality and amount of deposition in the basal ganglia.
Pubblicato da David Spizzichino a 16:00