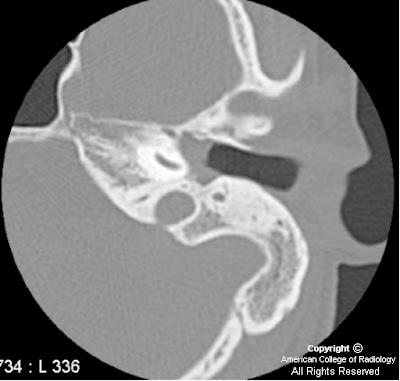 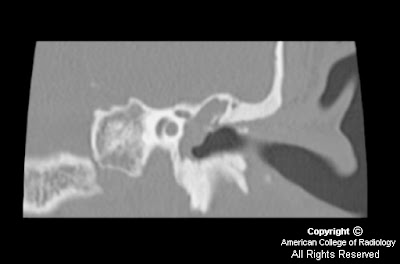 Figure 1: The axial CT image demonstrates the presence of a soft tissue mass in the middle ear with an intact jugular fossa.
Figure 2: The coronal CT image demonstrates a soft tissue mass and severe erosive change involving the epitympanic ossicular chain. There is lateral displacement of the residual epitympanic ossicular mass with an intact scutum.

The pars tensa variety of acquired cholesteatoma is much less common than pars flaccida cholesteatomas. The pars tensa is the tougher posteroinferior portion of the tympanic membrane and is not as prone to rupture as the weaker anterosuperior pars flaccida. Pars tensa cholesteatomas present with a mass in the middle ear, erosion of the long process of the incus or stapes, ossicular displacement, and epitympanic spread. The scutum is usually intact. Pars tensa cholesteatomas are also known as “sinus” cholesteatomas because of their tendency to spread to the sinus tympani and other recesses of the posterior tympanum. Spread from the posterior tympanum is typically superomedial or superolateral toward the additus.

The majority of acquired cholesteatomas involve the pars flaccida and Prussak’s space. Virtually all of the boundaries of Prussak’s space can be identified on CT. The lateral border consists of the pars flaccida and the inferolateral wall of the epitympanum (attic), while the medial border consists of the head of the malleus and the body of the incus. The short process of the incus defines the inferior border. Only the lateral mallear ligament, which forms the superior and anterior borders of Prussak’s space, cannot always be readily identified on CT. The head of the malleus and body of the incus are most susceptible to erosion by pars flaccida cholesteatoma. Erosion of the scutum is also frequently present. Lysis of the entire ossicular chain is uncommon.

The hallmark symptom of a cholesteatoma is painless otorrhea. Hearing loss from ossicular chain damage is another common symptom. Dizziness is relatively uncommon but may occur if the cholesteatoma is lying directly on the footplate of the stapes. A complication of cholesteatoma that may also result in dizziness is the development of a labyrinthine fistula from bony erosion. Other complications include erosion of the tegmen tympani (the roof of the epitympanic space) and subsequent invasion of the intracranial compartment. The lateral or inferior wall of the facial nerve’s tympanic portion is another area of potential erosion.

Computed tomography is the imaging modality of choice for the diagnosis of cholesteatoma. MRI may be utilized to evaluate for very specific problems such as dural involvement, subdural or epidural abscess, inflammation of the membranous labyrinth, and sigmoid sinus thrombosis. Cholesteatomas are hypointense on T1WI and intermediate signal intensity on T2WI. One important difference between cholesteatomas and granulation tissue is that cholesteatomas do not enhance.

The standard of care for treatment of cholesteatomas is surgical excision. Even though multiple operations may be required, removal of a cholesteatoma is almost always possible. Surgery is generally successful and complications from uncontrolled cholesteatoma growth are now relatively uncommon.
Pubblicato da David Spizzichino a 16:00