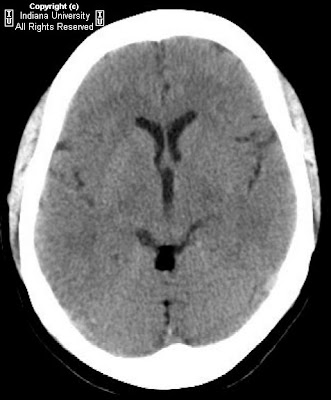 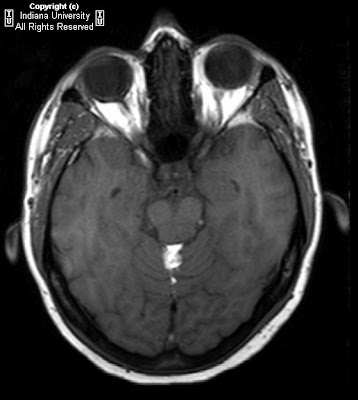 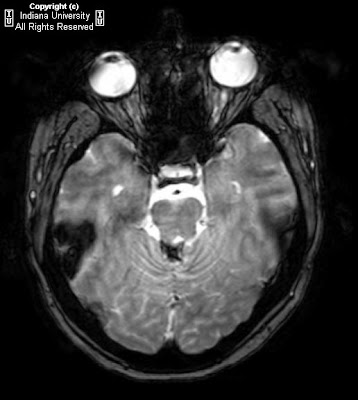 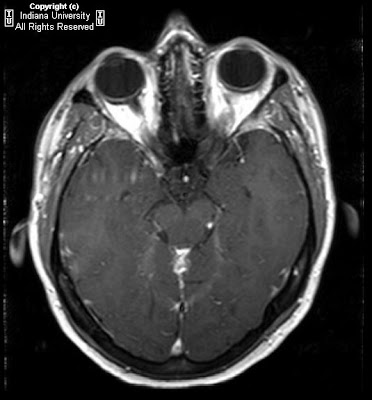 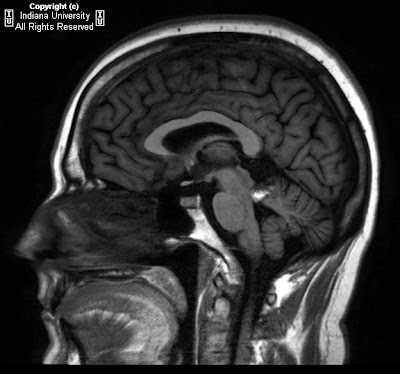 Dermoid lesions typically occur near the midline. Intracranially, they can be found parasellar, frontal, basal surface and in the posterior fossa most frequently in the superior cerebellar cistern and the fourth ventricle.
Dermoid tumors can rupture and release lipid contents into the ventricular or subarachnoid spaces. This may cause a chemical meningitis that can lead to recurrent symptoms, most commonly headache. Meningeal inflammation may result in arterial vasospasm and, rarely, stroke and death.
CT: Well-circumscribed, predominantly cystic mass with decreased attenuation in the range of -20 to -40 HU because of their fat content. May appear slightly heterogeneous due to additional ectodermal elements, including hair follicles, sebaceous glands, and sweat glands. Calcifications are frequent in the wall of the tumor.
MRI shows signal characteristics of fat. They are hyper intense on T1-weighted images and hypo intense on T2-weighted images.
Contrast enhancement is uncommon. If enhancement is present in a suprasellar tumor, other diagnoses should be considered including craniopharyngioma, teratoma, or germinoma.
Differential diagnosis for substances that are hyper intense on non-enhanced T1-weighted images include fat, proteinaceous material, methemoglobin, manganese, calcium, liquid cholesterol, melanin, and Pantopaque contrast.
Fat-suppression techniques may be helpful to confirm the presence of fat in the lesion and chemical shift artifact is frequently seen.
Centrally, dermoid tumors may appear inhomogeneous due to the presence of hair follicles, calcifications, and cellular debris.
Fat droplets in the ventricular or subarachnoid spaces strongly suggest rupture of a dermoid tumor.
Pubblicato da David Spizzichino a 16:00