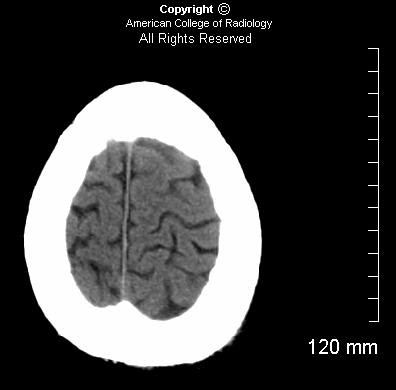 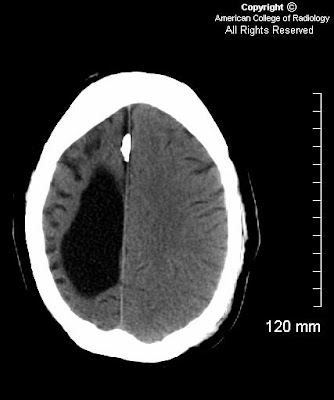 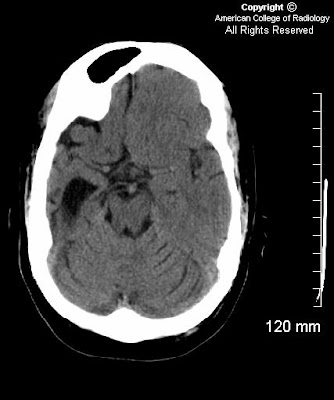 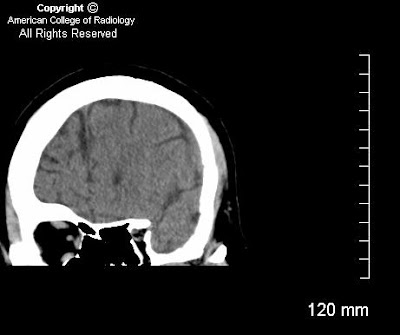 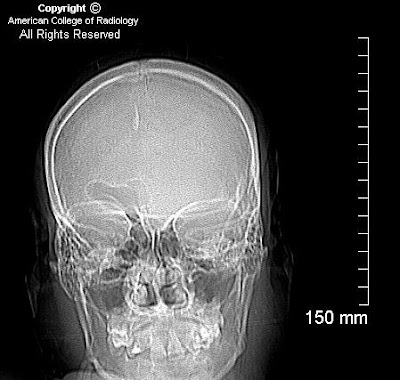 Axial CT images of the head in brain parenchyma and bone windows demonstrate the characteristic findings of DDMS. The right cerebral hemisphere is atrophic. The right lateral ventricle and cortical sulci are enlarged. The right calvarium is thickened with hypoplasia of the right anterior and middle cranial fossae. The right frontal sinus is hyperpneumatized. The falx attachment is displaced to the right.
Coronal CT image in brain parenchyma window demonstrates elevation of the petrous ridge, sphenoid wing and orbital roof.
Frontal scout image demonstrates calvarial asymmetry. The right calvarium is thickened with elevation of the sphenoid wing and orbital roof.


In 1933 Dyke, Davidoff and Masson described a condition of developmental asymmetry characterized by facial asymmetry, seizures, contralateral hemiplegia, learning difficulties and cranial asymmetry on skull radiographs. Today CT and MRI are available to further delineate the bone and parenchymal changes of the Dyke-Davidoff-Masson syndrome (DDMS).

The primary process in DDMS is asymmetric cerebral hemisphere growth with atrophy of one side. The ipsilateral lateral ventricle and cortical sulci enlarge as a result of parenchymal volume loss. Compensatory osseous thickening is an adaptive response to the unilateral decrease of brain substance and results in ipsilateral calvarial thickening, overdevelopment of the paranasal sinuses and mastoid air cells, elevation of the petrous ridge, sphenoid wing and orbital roof and hypoplasia of the middle and anterior cranial fossae. Ipsilateral displacement of the falx attachment is a key finding of DDMS. Importantly, this distinguishes the concomitant ipsilateral midline shift as a developmental anomaly.

DDMS can result from cerebral injury in utero or early in life. In the prenatal period causes include congenital malformation, infection and vascular insufficiency. In the perinatal and postnatal periods, causes include trauma, anoxia, intracranial haemorrhage, tumour, infection and prolonged seizures. The involved cerebral hemisphere will have enlarged sulci if the cerebral injury occurred after birth or after completion of sulcation. In contrast, if the cerebral injury occurred during embryogenesis no prominent sulci will be present.

Rasmussen encephalitis is a chronic, progressive, immune mediated disorder thought to be secondary to viral infection. It usually presents with intractable epilepsy which progresses to continuous focal seizures, hemiplegia and cognitive deterioration. The imaging features include increasingly more diffuse atrophy of one hemisphere and areas of high T2 signal. It typically does not have skull changes.

Compensatory osseous thickening with hyperpneumatization of paranasal sinuses is a non-specific response to loss of brain substance which, if asymmetric, can mimic DDMS.

Sturge Weber syndrome is a congenital malformation in which fetal cortical veins fail to develop normally. Although there is clinical overlap with DDMS the characteristic port-wine stain is a distinguishing feature. The imaging features which are sequelae of progressive venous occlusion and chronic venous ischemia are most often unilateral and include progressive cortical atrophy and characteristic tram track calcifications, enlarged ipsilateral choroid plexus and extensive pial enhancement. As the condition progresses there is compensatory thickening of the calvarium and hyperpneumatization of paranasal sinuses.

Hemimegalencephaly is a congenital malformation in which defective cellular organization and neuronal migration results in hamartomatous overgrowth of a hemisphere. Patients typically present with intractable seizures in the first year of life and go on to develop progressive contralateral hemiparesis. Imaging features include an enlarged dysplastic hemisphere, an enlarged ipsilateral lateral ventricle with a straightened and pointed frontal horn, contralateral displacement of the posterior falx and an enlarged and thickened hemicranium.
Pubblicato da David Spizzichino a 16:00