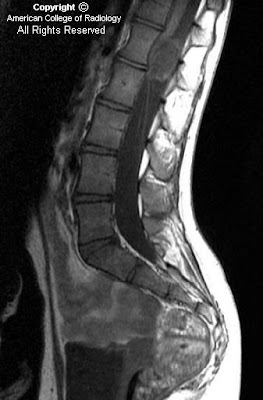 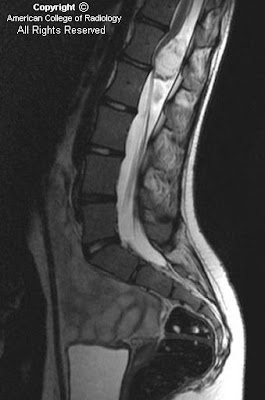 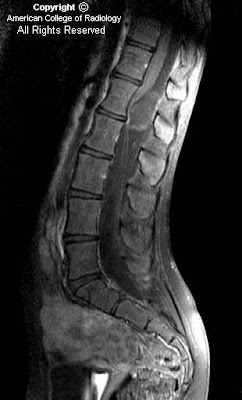 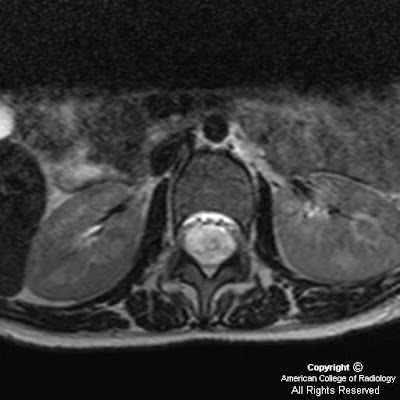 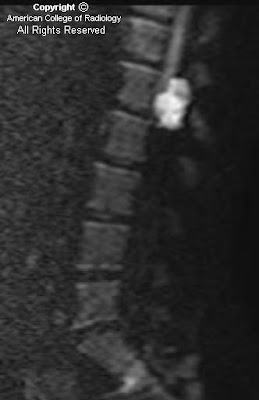 There is a non-enhancing heterogeneous T2 hyperintense and T1 hypointense intradural mass displacing the conus and the cauda equina anteriorly. Posterior scalloping of the L1 vertebral body suggests an indolent process. This mass has restricted diffusion.


Epidermoid is a benign neoplasm that develops from ectodermal tissue. It may be congenital or acquired. It may be acquired iatrogenically from implantation of viable dermal and epidermal elements following lumbar puncture, surgery, or trauma.
It is often difficult to differentiate between an epidermoid cyst from an arachnoid cyst. DWI and FLAIR are most useful to distinguish the two, because only an epidermoid cyst will have restricted diffusion and signal intensity different from that of CSF.

Epidermoid is a benign neoplasm that is developed out of ectodermal tissue. The capsule is made of a thin layer of squamous epithelium which grossly appears white and pearly and may be smooth, lobulated or nodular. These cysts are filled with desquamated epithelial keratin and cholesterol crystals, grossly appearing as a creamy, waxy material.

Spinal epidermoid cysts are rare, comprising 0.5-1% of intraspinal tumors, but up to 10% of spinal cord tumors in patients under 15 years. Tumors grow slowly until large enough to cause symptoms, usually in early adulthood. Prevalence is greater among males compared with females.