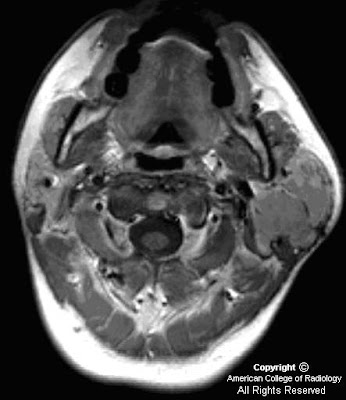 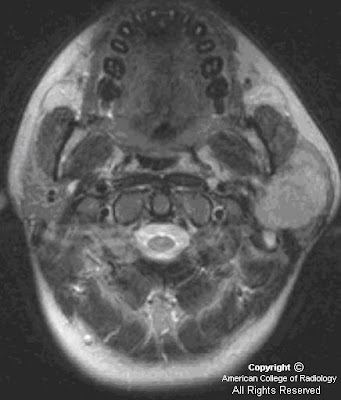 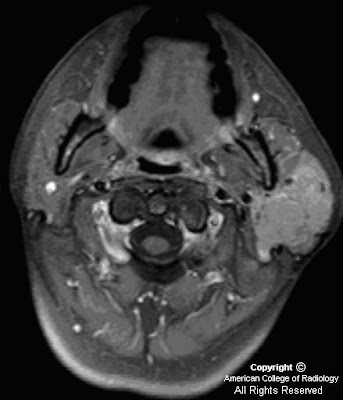 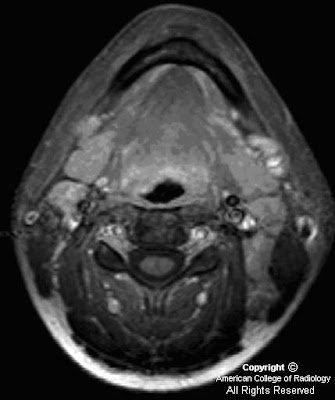 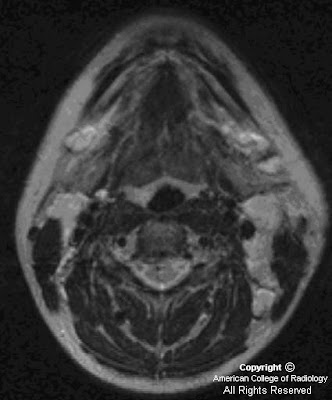 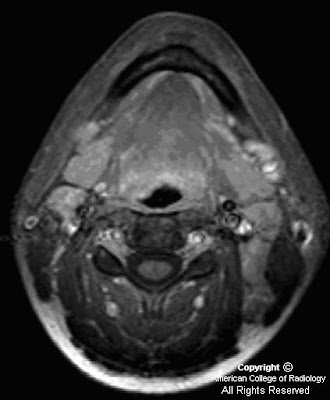 A left parotid lesion appears hyperintense on T1 and T2 (Figure 1 and Figure 3) as compared to muscle and demonstrates moderate to intense enhancement (Figure 4). The adjacent mandible is normal. Bilateral cervical lymphadenopathy (Figure 6 and Figure 8) is seen on T1 and T2 images, deep to the sternocleidomastoid muscle. Contrast enhancement within these lymph nodes is present (Figure 9).


Castleman disease (angiofollicular lymph node hyperplasia) is considered a benign lymphoproliferative disorder of unknown etiology and was originally described at the Massachusetts General Hospital by Dr. Benjamin Castleman in 1957. Distinction between the two subtypes – hyaline vascular or plasma cell – can be determined histologically. The hyaline vascular subtype is unicentric, more common, and typically demonstrates a relatively benign disease course. Symptomatology is often due to mass effect and compression of adjacent structures. The plasma cell subtype is often multicentric in location, thought to be a more systemic form of the disease, and associated with HIV and HHV-8. Symptoms are often non-specific. Secondary malignancies are thought to be associated with the plasma cell subtype as well.

Imaging characteristics are non-specific but can demonstrate a homogenous mass with moderate to intense contrast enhancement (more prominent in the hyaline vascular subtype). Some studies report T2 hypointense linear characteristics which are hypothesized to be fibrosis. The mediastinum is the most common site for unicentric Castleman lymphadenopathy followed by cervical involvement. Pelvic lymphadenopathy has been reported to demonstrate calcifications.

This case was biopsy proven to be Castleman disease of the hyaline vascular subtype. The referring physician opted for observation and several repeat imaging studies have demonstrated stability of disease.

Treatment for unicentric Castleman disease is typically surgical as it is often curable. Multicentric disease is more difficult to treat and therapy can include surgery, chemotherapy, anti-virals, and radiation.
Pubblicato da David Spizzichino a 16:00