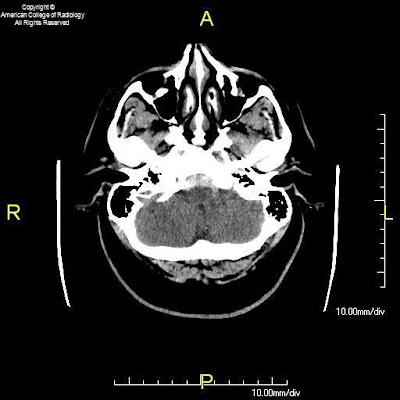 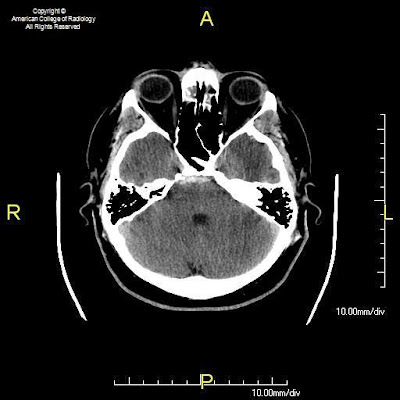 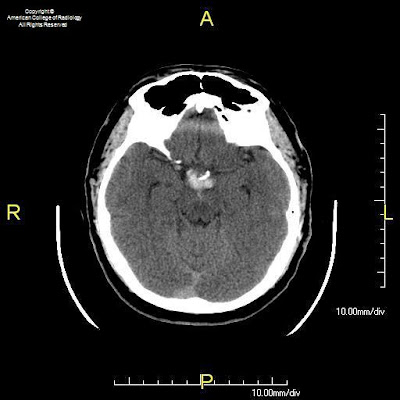 Figure 1, Figure 2, and Figure 3: Axial CT images of the brain demonstrate SAH in the premedullary, prepontine, suprasellar, and interpeduncular cisterns.
Other figures (not shown): Representative images from a 4-vessel cerebral angiogram demonstrate no evidence of aneurysm or vascular malformation.


Trauma and aneurysm are the two most common causes of SAH. At least 80% of cases of atraumatic SAH are caused by rupture of an intracranial aneurysm. When SAH is present, many clinicians request CT or MR angiography in order to quickly and non-invasively diagnose aneurysm. If an aneurysm is not detected with one of these modalities, conventional cerebral angiography (the gold standard for exclusion of aneurysm) is necessary. If the initial angiogram is negative, a second cerebral angiogram, typically performed 1-3 weeks after the first, is mandatory. This is because occasionally an aneurysm will be missed on the initial angiogram due to spasm or partial/complete thrombosis. The diagnosis of non-aneurysmal SAH can be applied to patients who have two consecutive negative technically adequate 4-vessel cerebral angiograms. Additionally, many clinicians request MRI of the spine to exclude the possibility of spinal AVM as a source for SAH.

The classic variety of non-aneurysmal SAH is known as benign perimesencephalic SAH or pretruncal nonaneurysmal SAH. As the name implies, the hemorrhage is situated around the midbrain and anterior to the brainstem in the ambient, interpeduncular, and prepontine cisterns. The term “benign” refers to the fact that after recovery from the initial episode, there is no increased risk of repeat hemorrhage. Cerebral vasospasm is less likely in these patients, but does occur. Hydrocephalus also remains a possibility during the acute phase. Although not clearly understood, one proposed mechanism of benign perimesencephalic SAH is rupture of the venous plexus anterior to the pons (the anterior pontomesencephalic plexus). This is postulated to occur as a result of increased venous pressure from strenuous activities such as exercise. Intramural hematoma of the basilar artery and rupture of a basilar perforating artery have also been suggested as alternate hypotheses.

Although benign perimesencephalic SAH has been known as a distinct clinical entity for some time, patients may present with non-aneurysmal SAH in an atypical distribution (non-perimesencephalic). In some of these patients, the total volume of hemorrhage is increased such that blood is present throughout the basal cisterns and extends over the cerebral convexities. In other patients, the hemorrhage is confined to the convexities, quadrigeminal cistern, or other atypical locations. In today’s case, Patient #1 presented with the classic variety of benign perimesencephalic SAH. Patient #2 presented with atypical non-aneurysmal SAH. Both patients recovered, and have had no repeat episodes of hemorrhage to date.