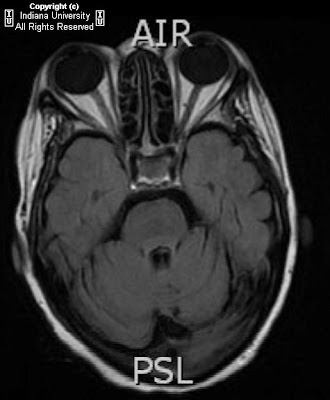 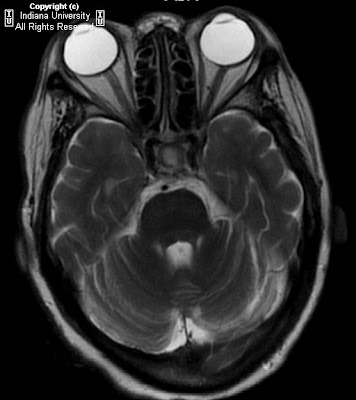 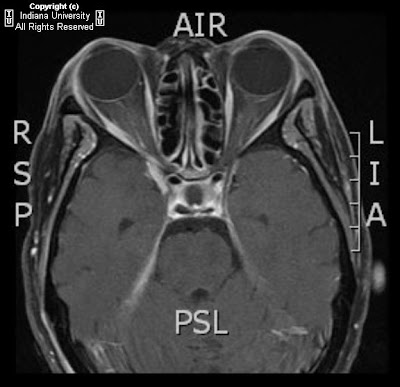 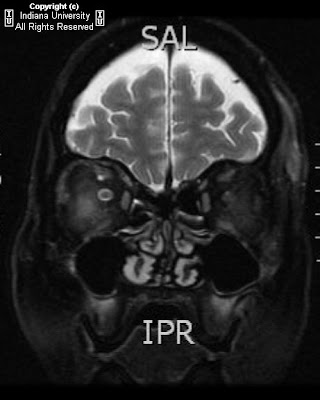 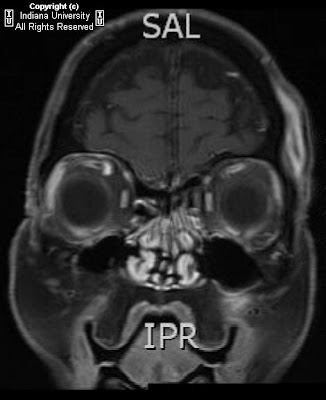 Intracranial pseudotumor (Tolosa-Hunt syndrome) is a part of a spectrum of "quasineoplastic" lesions that demonstrate orbital, intracranial, or pulmonary involvement, and include such other disorders as plasma cell granuloma and hypertrophic cranial pachymeningitis. It is a chronic granulomatous disease of unknown origin, which has been hypothesized to represent a low grade fibrosarcoma of inflammatory cells versus an autoimmune phenomenon. While Tolosa-Hunt syndrome is rare, orbital pseudotumor is the third most common ophthalmic disorder, and encompasses 5-8% of all orbital masses. Histologically, the lesions of Tolosa-Hunt demonstrate mixed lymphocytic and plasma cell infiltrate, with a variable degree of fibrosis. Lesions favor the cavernous sinus and basal meninges, although falcine and tentorial lesions have been described.

Patients with intracranial lesions are more frequently young adults, who present initially with chronic headaches or cranial nerve palsies. Patients with orbital involvement are more frequently middle-aged, and may present with painful proptosis and vision loss . Symptoms may be intractable, leading to severe disability. Untreated or unresponsive disease may progress to death. First-line treatment is invariably high-dose steroids, with radiotherapy or surgical resection reserved for patients with incomplete response to steroids .


Radiologic Overview of the diagnosis

The imaging hallmarks of Tolosa-Hunt syndrome are characterized by an enhancing, infiltrating meningeal mass, which favors the cavernous sinus or basal meninges, although falcine and tentorial involvement has been described . Focal meningeal thickening may range from just a few millimeters to a greater than 2 cm rind. With intracranial pseudotumor, orbital involvement is spared more than 90% of the time. Tolosa-Hunt remains a diagnosis of exclusion, once meningitis, en plaque meningioma, and meningeal metastases are ruled out.

The imaging modality of choice for imaging patients with Tolosa-Hunt remains MRI, although useful information may be gleaned from other modalities. On non-contrast enhanced CT (NECT), there are no specific findings to suggest the diagnosis; however, this modality may be of some value in differentiating the lesion from en plaque meningioma. On contrast enhanced CT (CECT), salient imaging findings include enhancing, thickened meninges or a curvilinear appearance of a single meningeal region. As aforementioned, MRI remains the primary modality for diagnosis of Tolosa-Hunt syndrome, and each sequence may provide critical information required to make the diagnosis. On T1WI, one may find focal thickening of the meninges that is isointense to gray matter. On T2WI, lesions are characterized as iso- to hypo intense regions of focal meningeal thickening, which may be more hypo intense as they become more fibrotic. FLAIR is of little help in making the diagnosis, but it is unlikely to demonstrate focal brain edema underlying the lesion . Contrast enhanced T1WI is the single most valuable sequence for evaluation of Tolosa-Hunt syndrome, and is characterized by diffusely enhancing region of meningeal thickening, which may range from a few millimeters to greater than 2 cm in some cases. Diffuse boney infiltrates may be appreciated on fat saturated contrast enhanced T1 sequence. While angiography is not considered a primary modality, severe disease may result in carotid artery narrowing, thus MRA may be a useful adjunct in the appropriate clinical setting.