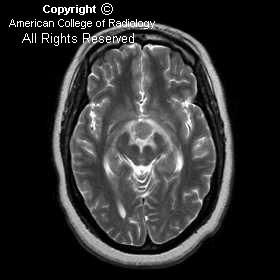 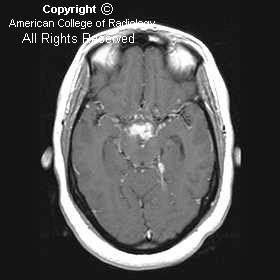 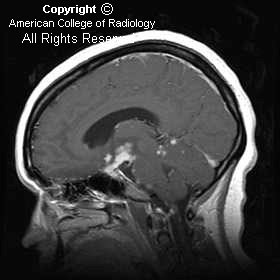 There is a suprasellar mass lesion identified, which is soft-tissue signal on the T2-weighed sequence (Figure 1)
The mass enhances (Figure 2 and 3) along with nodular enhancement in the Sylvian fissures bilaterally (Figure 2), the prepontine region (Figure 3), and the superior vermian region (Figure 3). The pituitary stalk demonstrates dense thick enhancement (Figure 3).


Sarcoidosis is inflammatory disease of unknown etiology, which affects multiple organ systems including the central nervous system. Females are affected more than males and this disease has a 10:1, black to white predominance. Central nervous system involvement occurs in 15% of patients, while symptomatic neurologic involvement is seen in approximately 5%. Dysfunction of cranial nerves and diabetes insipidus are common neurologic presentations. The MR appearance in these patients includes thickening and enhancement of the meningeal surfaces, solitary masses or multiple small, scattered meningeal or parenchymal lesions. When MR imaging shows thickening and enhancement of the pituitary stalk and associated leptomeningeal disease as in this case, sarcoidosis is a very strong possibility, along with meningitis, particularly fungal. Relative T2 hypointensity can be seen commonly, although this can also be seen in cases of fungal diseases, lymphoma, and meningioma.

The diagnosis can be established by performing a Kveim-Siltzbach skin test or by identifying other organ involvement with the intent to biopsy.
Pubblicato da David Spizzichino a 16:00