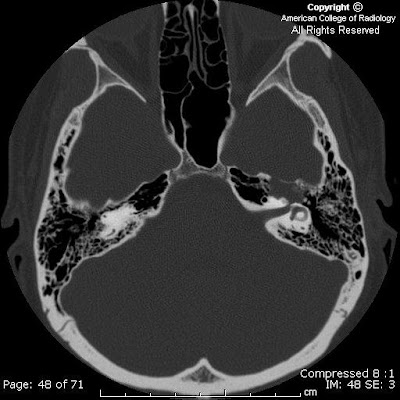 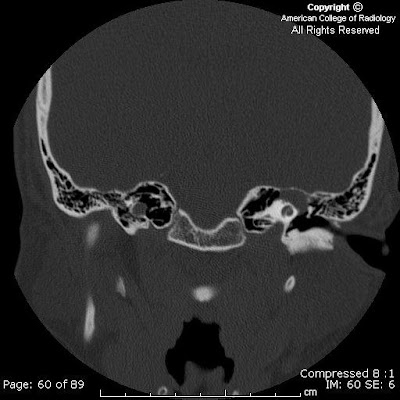 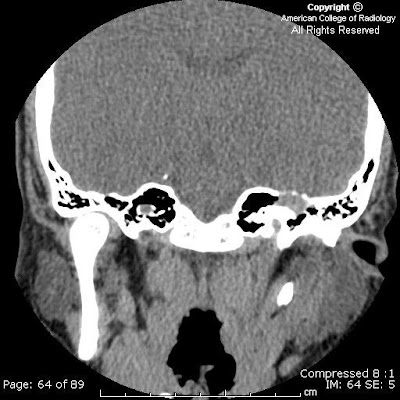 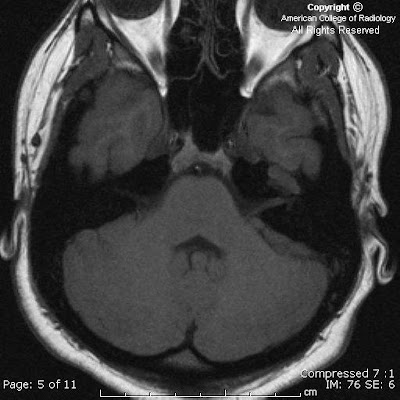 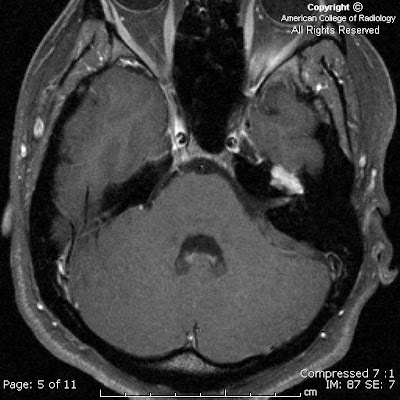 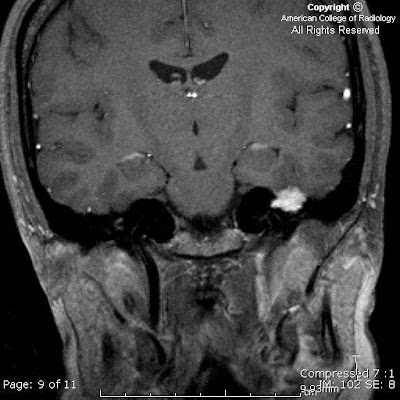 
Facial nerve schwannomas (also called facial nerve neuromas) are rare benign tumors of the Schwann cells of the seventh cranial nerve. They may arise along any portion of the facial nerve, including within the internal auditory canal, the labyrinthine portion, the tympanic portion, the mastoid portion, or within the parotid gland. However, the most common location for a facial nerve schwannoma is the geniculate ganglion. Patients present most frequently with hearing loss (70%) and with slowly progressive facial nerve paralysis (50%). These lesions are slow growing, but eventually most will enlarge and cause hearing loss. The treatment may be conservative if the schwannoma is asymptomatic; these lesions may be followed until symptoms develop. Surgical treatment is also an option, with the aim being preservation of facial nerve function if possible, and facial nerve grafting if necessary. The mean patient age at presentation is 35 years. If multiple schwannomas are present, the diagnosis of neurofibromatosis type II may be considered. 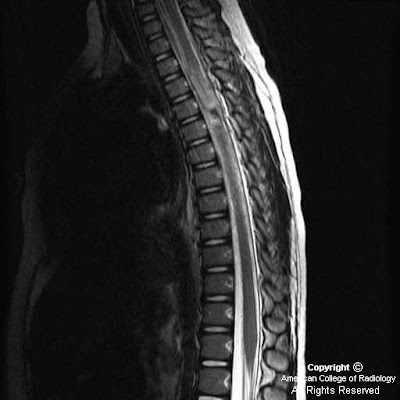 History: A 2-year-old girl presents to the emergency department status post motor vehicle collision. She was restrained appropriately in a car seat and has no obvious injury on initial exam. CTs of the head, cervical spine, chest, abdomen, and pelvis were performed. The initial CT exams demonstrated a minimally displaced iliac wing fracture, but were otherwise normal. A detailed neurological examination of the patient revealed bilateral lower extremity paralysis and sensory deficit. The head and neck CT scan was negative.

Figure 1: The sagittal T2 weighted image shows an interruption in the cord below the cervicothoracic junction with edema extending above and below the level of transection.


SCIWORA was initially described as a distinct disease in 1982, when MRI was not routinely utilized in evaluation of spinal cord injury (SCI). Pang and Pollack’s criteria for SCIWORA are: objective, posttraumatic myelopathy without vertebral subluxation or fracture as seen on plain x-ray films. Typically, there is no identifiable c-spine injury on CT imaging as well. In patients older than 16, SCI is usually associated with vertebral fracture. From infancy to age 16, SCI injury is rare, but frequently occurs without vertebral trauma. Outcomes are typically poorer with children under 8.

The phenomenon is thought to be related to weaker paraspinal muscle control, larger relative head size, and a more horizontal positioning of the facets in children. Also, in the thoracolumbar spine, there is a mismatch in the elasticity of the tissue comprising the spinal column vs the elasticity of the cord itself; the former can endure much greater distraction than the latter.

Currently with MRI, we are able to image the cord pathology in SCIWORA. Several different injury patterns are recognized on MR imaging: transection, contusive hemorrhage, traumatic edema, and concussion. Transection is seen as a complete disruption in the cord. Contusive hemorrhage and traumatic edema appear as focal, intramedullary signal abnormalities. Concussion is diagnosed when the cord appears normal or if there is equivocal, intramedullary, heterogeneous T2 signal corresponding to the level of clinical deficit. The severity of injury depicted on MRI correlates with long-term neurologic dysfunction with transection corresponding to complete and permanent deficit, and concussion corresponding to complete neurologic recovery.
Pubblicato da David Spizzichino a 16:00 Nessun commento: 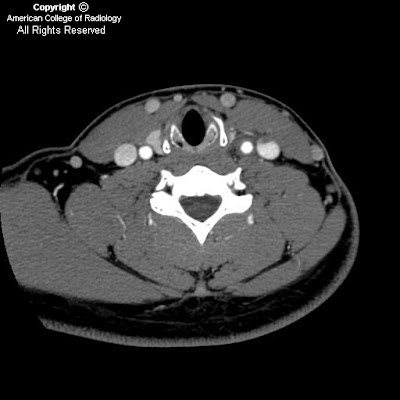 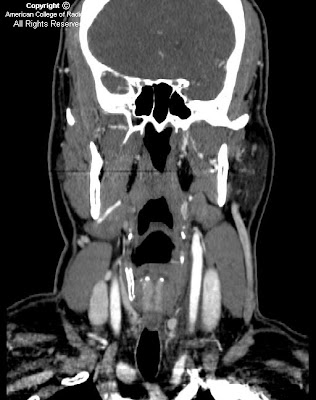 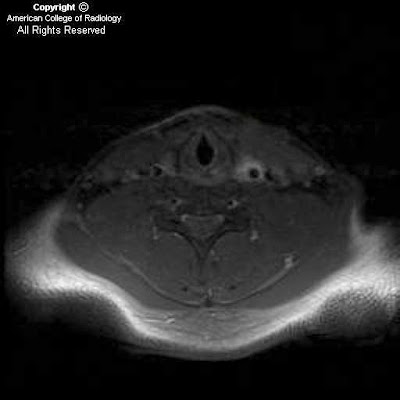 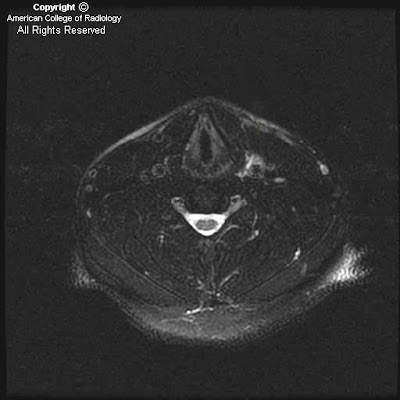 On axial source image (Figure 1) and coronal (Figure 2) reformatted CTA of the neck, there are inflammatory changes and soft tissue attenuation surrounding the left common carotid artery consistent with thickening of the carotid sheath. Compare this with the normal right carotid artery (Figure 1). The left carotid artery itself is normal, without significant narrowing or evidence for dissection.
Axial T1 precontrast (Figure 3) and postcontrast (Figure 4) images demonstrate enhancement of the carotid sheath on the left (Figure 4). On T2-weighted images, there is increased signal (Figure 5) in this region as well.


Carotidynia is a syndrome of unilateral neck pain with tenderness to palpation over the carotid artery, first described in 1927. Neck pain can have many causes, and it is important to exclude other etiologies before a diagnosis of idiopathic carotidynia can be made. In this case, we describe the characteristics of idiopathic carotidynia, which is a benign, self-limited syndrome. There is controversy whether the entity even exists, and some have suggested that the diagnosis is not validated.

The etiology of idiopathic carotidynia is proposed to be inflammatory; the syndrome is often associated with a preceding viral illness, occurs more frequently in cold weather, and is more common in women than men. The inflammatory nature is supported by its prompt response to steroids and NSAIDS, and a postviral etiology is supported by its self-limited course. Limited pathologic confirmation exists due to the benignity of the syndrome and obvious risks of biopsy. However, there is a pathologic case report describing a biopsy taken during a CEA, which demonstrates localized inflammation not characteristic of that seen in a typical vasculitis.

Benign, idiopathic carotidynia is a diagnosis of exclusion, and although diagnosis can be made clinically, imaging is important in uncertain cases and to exclude other causes of neck pain. MR is the preferred examination. Typically, on T1-weighted images, abnormal enhancing tissue conforming to the fascial borders of the carotid sheath is seen, and increased signal in the same region is present on T2-weighted images. Computed tomography findings are similar, demonstrating homogenous soft tissue infiltration of the carotid sheath and surrounding inflammatory changes. No associated narrowing of the lumen is present.

Although benign idiopathic carotidynia is self-limited by definition, many patients are treated with a short course of NSAIDS or steroids for symptom relief. Prompt response to treatment confirms the diagnosis. In these cases, the lack of any other findings to suggest an alternative diagnosis supports the existence of carotidynia as a distinct clinical syndrome.


International Headache Society Classification Committee criteria for the diagnosis of idiopathic carotidynia:
A) At least one of the following overlying the carotid artery:
- Tenderness
- Swelling
- Increased pulsations
B) Appropriate investigations do not reveal a structural abnormality
C) Pain over the affected side of the neck; may project to the ipsilateral side of head
D) Syndrome is self-limiting, of less than two weeks duration
Pubblicato da David Spizzichino a 16:00 Nessun commento: 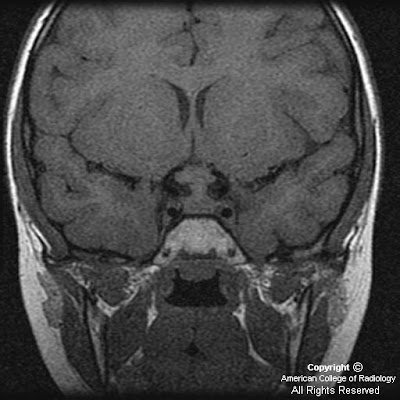 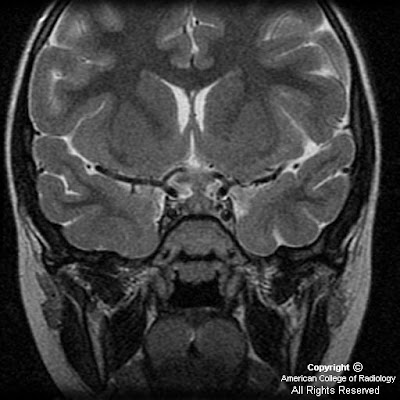 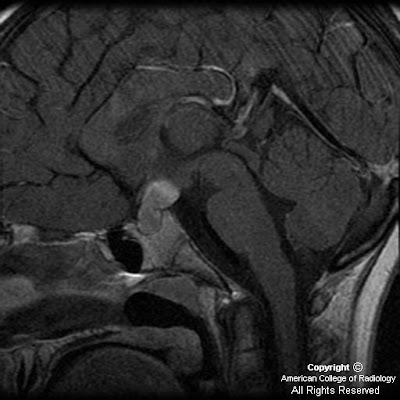 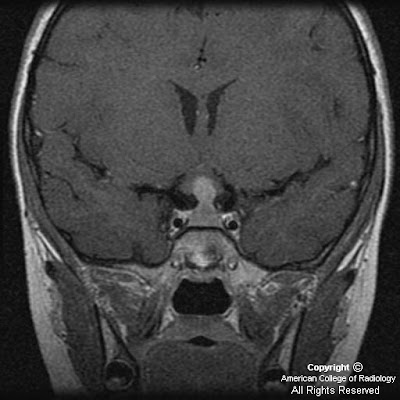 There is thickening of the pituitary infundibular stalk, with the lesion extending inferiorly, expanding the pituitary gland, and superiorly extending into the hypothalamus. The stalk measures 7 mm.
The thickened infundibulum is isointense to gray matter (Figure 1 and Figure 2). Sagittal and coronal postgadolinium images demonstrate intense, homogeneous enhancement of the abnormal soft tissue involving the infundibulum (Figure 3 and Figure 4).


LCH is a clonal proliferative disease of Langerhan cells, which are bone marrow derived cells of the dendritic cell line with antigen presenting and processing properties.

LCH is a systemic disease with several modes of presentation. There are three main clinical subtypes:
- Eosinophilic granuloma: unifocal, commonly involves bone (up to 80 percent of cases), lymphnodes, or lungs as a primary target.
- Hand-Schüller-Christian disease: affects children 1 to 5 years of age and classically described as triad of diabetes insipidus, exopthalmos, and destructive bone lesions.
- Letterer-Siwe disease: acute disseminated histiocytosis - occurs in patients less than two years old with the worst outcome.

LCH typically presents during the first decade of life. In general, the younger the patient at the time of diagnosis and the greater the extent of disease, the worse the prognosis. CNS manifestations occur in 10% to 50% of cases and occur more frequently with multisystem disease.

The wide spectrum of intracranial findings in LCH patients can be classified into four major groups:
- Osseous lesions in the craniofacial bones or skull base: Sharply marginated lytic skull defects with beveled margins and lack of marginal sclerosis. Temporal bone and orbit involvement is common.
- Hypothalamic-pituitary region: The most frequently involved intracranial region in LCH. Diabetes insipidus is a clinical hallmark of LCH, occurring in 5 percent of cases at the time of diagnosis and up to one third of cases on follow-up evaluation. The most frequent morphologic change is a thickening (greater than 3 mm) with enhancement of the pituitary stalk, accompanied by lack of the normal T1-weighted imaging shortening in the posterior pituitary.
- Intraaxial parenchymal disease in the cerebral hemispheres, brainstem, or cerebellum (most common parenchymal site)
- Nodular thickening of the dura or leptomeninges

The natural history of LCH is variable, depending on age of onset and extent of involvement. Solitary eosinophilic granuloma has the best prognosis, with spontaneous remission being common. Multifocal and systemic LCH carries a mortality of around 20 percent.
Pubblicato da David Spizzichino a 16:00 Nessun commento: 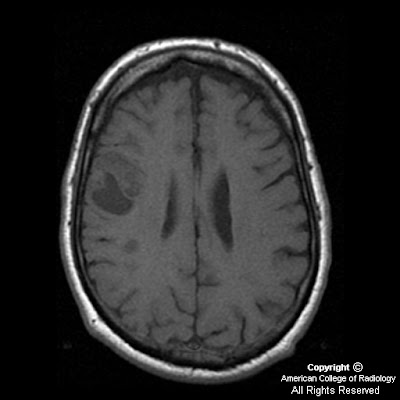 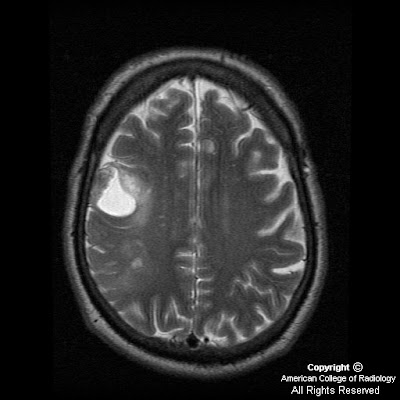 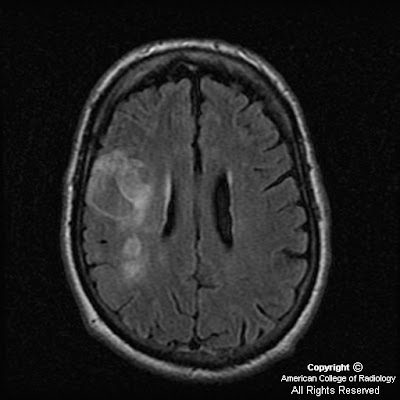 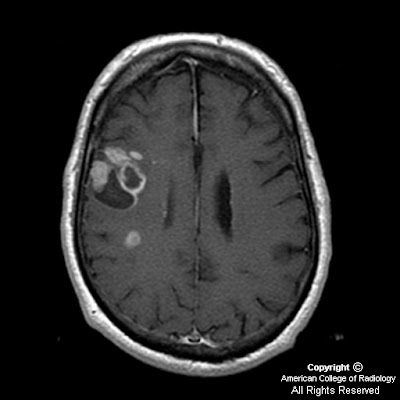 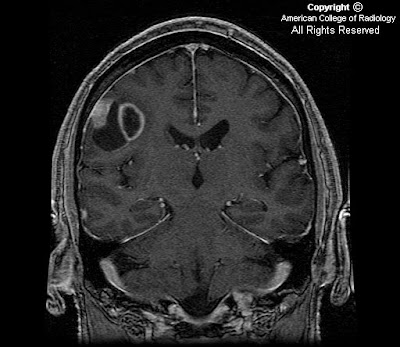 There is a peripherally located heterogeneous, necrotic mass in the right frontal lobe (Figure 1). There is mild associated edema and mass effect on right lateral ventricle (Figure 2 and Figure 3). Thick, irregular enhancement is seen with central necrosis (Figure 4 and Figure 5). The lesion has extended to the brain surface.
Area of similar signal intensity and nodular enhancement is seen posterior to the above mentioned lesion (white arrow in Figure 2, 3 and 4).
Scan done after one month reveals significant increase in the size of the lesions (not shown).

Gliosarcomas typically present in the sixth to seventh decade. Clinical presentation and imaging picture are indistinguishable from GBM. Like GBM, gliosarcomas are WHO Grade IV tumors.

Gliosarcomas are usually solitary, but may be multicentric. On imaging, gliosarcoma appears as a heterogeneously enhancing mass with dural invasion, and may show calvarial involvement. It is most common in the temporal lobe. FLAIR and T2-weighted images may demonstrate extensive high signal in the adjacent white matter, reflecting a combination of peritumoral edema and infiltrating tumor. Heterogeneity may be due to hemorrhage or necrosis. Enhancement is usually thick and irregular.

The prognosis is poor with a median survival of 6 to12 months (similar to GBM). Local recurrence is typical, with extracranial metastases being common.
Pubblicato da David Spizzichino a 16:00 Nessun commento: